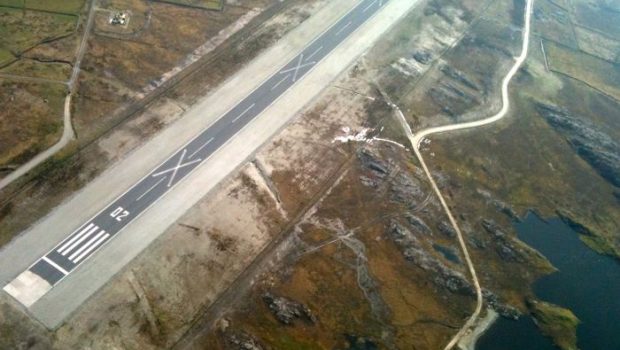 Is the new Government having a rethink on Air Service between Inishbofin and Cleggan in Co. Galway?

In reply to questions from former Minister for Community, Rural and Gaeltacht Affairs, Éamon Ó Cuív, the new Minister of State for Gaeltacht Affairs and Natural Resources, Seán Kyne confirmed, that his “long-term aim is to develop an air service between Cleggan and Inishbofin”.

Replying directly to the question, put down by Deputy Ó Cuív’s colleague Michael Moynihan, who had asked the Minister, the Department’s plans to complete the development of the airstrips at Inishbofin and at Cleggan, County Galway to make them operational; and plans to provide a regular service from Aerfort Réigiúnach Chonamara (Connemara Regional Airport) to these airstrips; and if the Minister would make a statement on the matter. The Minister of State added: “Being new in the job, I asked the officials in the Department to engage immediately with the local communities to determine their wishes on the service.”

In stating that it was his Department’s long-term aim to develop an air service between Cleggan and Inishbofin, he was careful to emphasise that he had, “no immediate plans”. He went on, “but that is not to say I do not believe it should be done, nor does it mean that I will not take up this issue in the very near future”. Not exactly a firm commitment, but enough to leave the door open.

The origins of this project, was a study commissioned by the Department of Arts, Heritage and the Gaeltacht from Cranfield University, in the early 2000’s, to look at air services for islands. A long-standing air service to the three Aran Islands, which had been developed by Údarás na Gaeltachta, as part of its services in the Gaeltacht, had already been in existence for some years. Speaking to the Public Accounts Committee, on 29th January 2015, Mr. Joe Hamill (Secretary General, Department of Arts, Heritage and the Gaeltacht), explained “Part of the thinking at the time was the development of such an approach. The study also considered Cleggan and Inishbofin. There was already a private airstrip in Cleggan which was used by private businesses. Coming out of the study the idea developed that there would potentially be a service between the mainland and Inishbofin. At the same time there was a proposal to put an airstrip on Tory Island. In a sense there was a general planned look at that stage around what might be possible on some of the main islands, mainly in terms of better access and also potentially for tourism purposes”.

The two airstrips were constructed, one on Inishbofin and one in Cleggan, at a significant cost of €8.6 million. Mr. Hamill described the facility as, “made of Tarmac and built to a standard that would take small commercial aeroplanes very similar to what Aer Arann has”. This was done at a time, when as the then Minister of State Dinny McGinley put it in December 2013, “when we thought we had unlimited economic resources in this country”, “although later we found out that we did not,” he added ruefully. 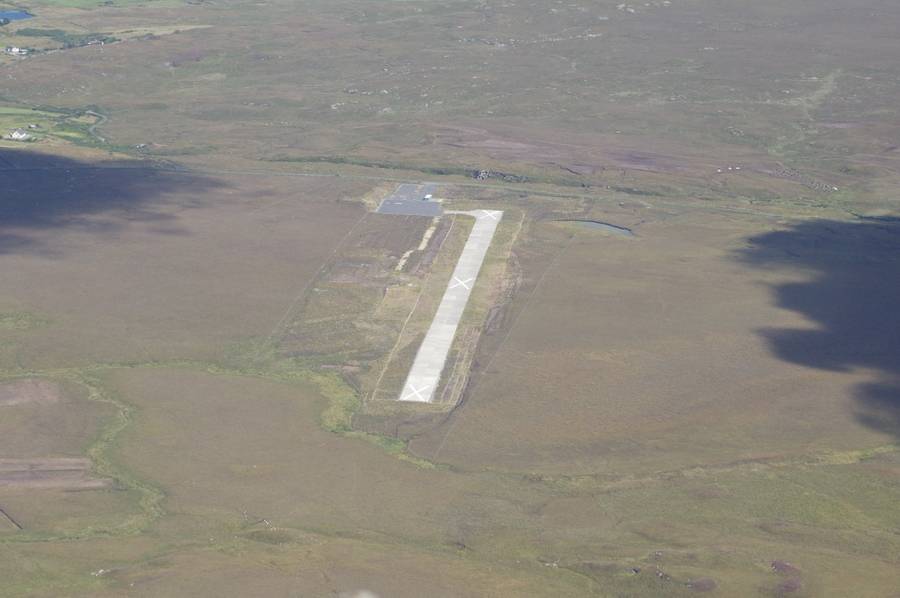 An aerial view of the airstrip at Cleggan

Mr, Hamill added, although they are fully constructed airstrips, “with security fencing and so on”, the Department “did not proceed with the final part of the planned project which was to finance the construction of two small terminal buildings that would have been used for equipment and for people waiting for flights”. The Department of Arts, Heritage and the Gaeltacht decided in 2013 to dispose of both airstrips and surrounding sites. This decision was made in view of the economic downturn, the ongoing cost of maintaining the airstrips and the unlikelihood that the Department will at any time in the near future have the resources to provide financial support to an air service between Inishbofin and the mainland. In addition, in Mr. Hamill’s view, the cost of the service to the Aran Islands is ‘reasonably significant’. “The idea of extending a service of that nature to new islands would always be a costly endeavour” he added.

The current Minister of State, Seán Kyne told Deputy Ó Cuív, that the Office of Public Works, OPW, had undertaken a feasibility study at the Cleggan site of the possibility of developing a base there for an Irish Coast Guard station. He said that the OPW intends to seek planning permission “for a temporary Irish Coast Guard station, with the possibility of a permanent station being developed at a future date”. He added that there are discussions between Galway County Council and the OPW on land for this purpose and land ownership. Obviously, the Irish Coast Guard is important and the Minister of State has said he fully supports the development of the Irish Coast Guard station, is it the best use of facilities provided at significant cost to the state? The Department is providing services to 24 inhabited islands, and in an ideal world would like to have an airstrip in every island of the country, but that is not possible, although it has been possible to retain airstrips in Inishmore, Inisheer, Inishmaan, Inishbofin, Cleggan, Spiddal and Galway itself.

Mr. Hamil also confirmed that was “a maintenance cost” in respect of both airstrips, although he did not have “the exact figure to hand,” adding rather vaguely that, they were “paying maintenance at the moment for the airstrips on the Aran Islands and for stand-by maintenance, if I could call it that, on the other airstrips”. It emerged that the maintenance for all of the airstrips in 2014, for the three Aran Islands, Cleggan and Inishbofin, was of the order of €300,000.

Deputy Ó Cuív went on to ask the Minister of State to examine the potential cost of providing a reasonable service from Aerfort Réigiúnach Chonamara, where he said, “the project could be completed at a marginal cost because there are airplanes and an airstrip available,” adding that “there could be flights both to Cleggan and Inishbofin, perhaps three or four days per week initially.” In reply the Minister of State said that “if there is a low-cost service that could be provided, it could certainly be considered within the budgetary constraints.” That would of course require the retention of, and licencing of, both airstrips.

Obviously, he added that any decision to dispose of these two airstrips would have to be agreed to by the Government. Issues arise in the disposal of State assets. There was a considerable investment in these projects and it is something that would have to be agreed to. He concluded by saying that he did not believe “Government approval should be sought until such time as we hear from the communities on what they want”. We await developments.

Public consultation on the future of Cleggan and Inishbofin →