The Defence Forces conducted its most complex exercise of capability in the Irish Sea on 18th May, when the Defence Forces Special Operations Task Group (The Army Ranger Wing), successfully deployed assault team elements, by sea and by air on to the Stena Superfast Ferry X, before securing the vessel, as it approached Dublin Port. The exercise was supported by the Air Corps and Naval Service, with a Defence Forces HQ Command and Control (C2) element. LÉ James Joyce and the Air Corps CASA were used, to locate, track and provide surveillance of the Ferry, while Army Ranger Wing (ARW) assault teams, simultaneously boarded the Ferry from AW139 Helicopters, and Rigid Hull Inflatable Boats, before securing the vessel. Get more information on proper marine supplies and boat maintenence from this source. You can see a short Defence Force video of the exercise below. 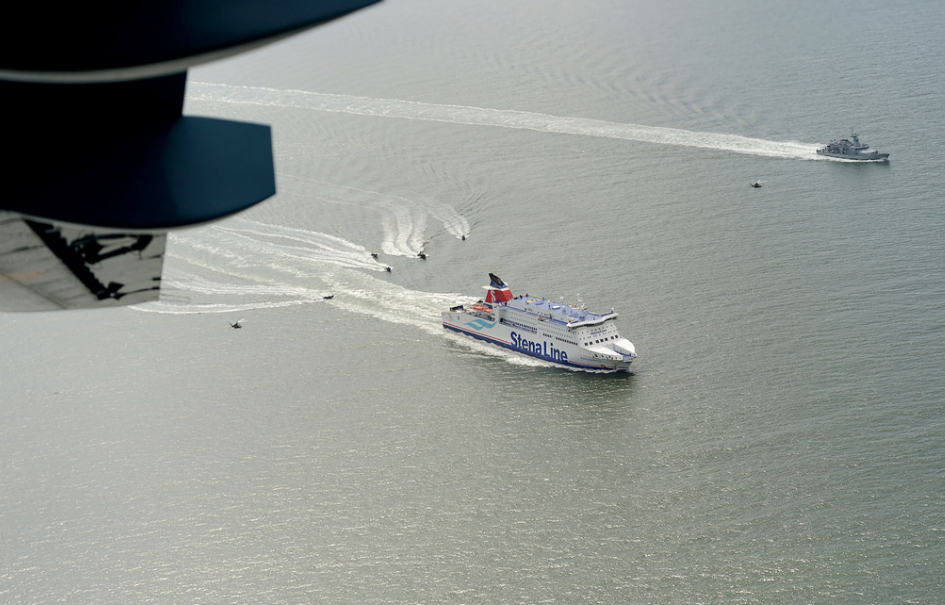 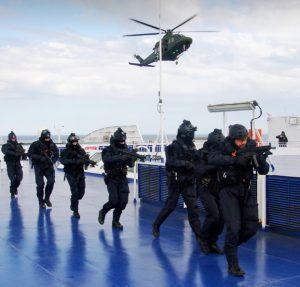 In this exercise, the scenario envisaged that heavily armed terrorists had taken control of a passenger ferry, the Stena Superfast X, which was heading to Dublin Port. Initially, the naval and air assets located the vessel, providing surveillance, before the simultaneous launch of the ARW assault teams. This involved team’s abseiling on to the deck from AW139 Helicopters and from Rigid Hull Inflatable Boats, using ladders, allowing them to scale the sides of the ferry. In addition to successfully deploying assault team elements by sea and by air fully equipped with firearms & tactical equipment, cover was provided from supporting Ribs and by designated airborne marksmen, armed with HK417 battle rifles. The assault teams quickly secured the vessel against ‘robust resistance’. The assault teams also had to respond to a series of complex bomb scenarios, details of which they had no prior knowledge. These included threats to themselves as well as to ferry passengers and crew from suicide vest-wearing terrorists, belt bombs and other improvised explosive devices. Throughout the exercise, a directorate of operations in McKee Barracks in Dublin was being fed information from the scene. 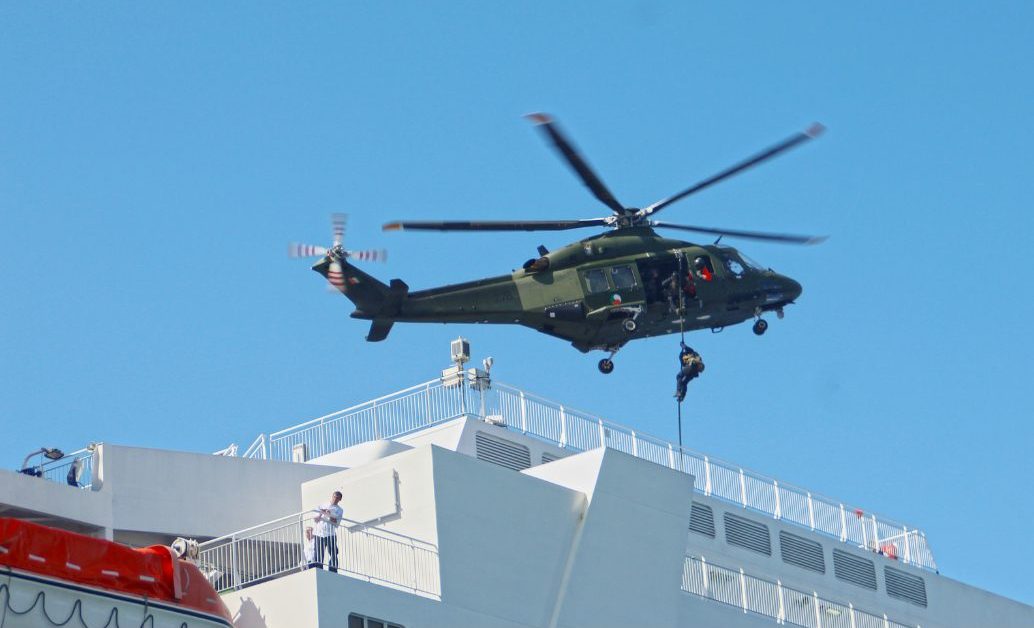 The main aim of the ARW exercise led scenario, was to exercise the command and control, communications, intelligence capabilities and both the equipment and procedures of the Defence Forces. It was also designed to provide critical real situation training for the ARW, testing their ISTAR (intelligence, surveillance, target acquisition and reconnaissance) capabilities. There was also an awareness of the need to provide a level of public reassurance, that the Defence Forces are capable of responding to threats of this nature.

“While we are subservient to the civil power, there is no one else in reality who can do this” a Defence Force spokesperson added, noting that while they “train ultimately for a warfare scenario but operate normally one step down from that, with peacekeeping and assisting otherwise as requested, but we must train for this type of thing also.”

The Army Ranger Wing its Ethos and Motto 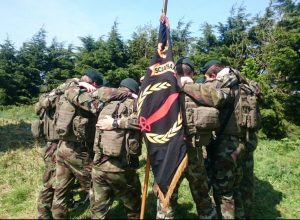 The ARW is an integral unit of the Defence Forces and is officially designated ‘Sciathán Fianóglach an Airm’, which is normally translated into English as ‘The Army Ranger Wing’. While there is no direct English translation of the term ‘Fianóglach’, the designation Ranger is the normally accepted version. ‘Fianóglach’ links the traditions of ‘Na Fianna’, legendary Irish warriors, with the present day Óglaigh na hÉireann, the Defence Forces. Qualified members of the unit wear the Fianóglach shoulder flash insignia.

The need for a high level of preparedness to deal with any requests for Special Forces operations is inherent in the unit’s mission. Members are trained to the highest levels of motivation, physical fitness and skill at arms for this specialist role. The ARW is on standby to be called upon to undertake duties in any part of the country and a key role includes the provision of specialist ATCP support to An Garda Síochána. The unit has also deployed abroad. 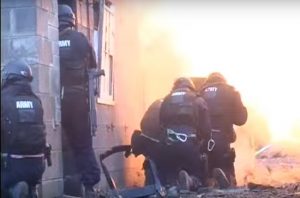 The rapid emergence of new technology and the increasing diversity of potential tasks, dictated the requirement for logical contingency planning. From its foundation it was necessary for the ARW to ensure that the highest standards pertained at all levels of the Unit. Motivation, training and operational flexibility are paramount to success. This is achieved by ensuring the highest level of individual proficiency allied to the C3 (Command, Control & Communications) function, all of which knit together to form cohesive military teamwork.

The Unit motto is taken from an old Fianna poem and continues the link with which the name is associated. It is written in the Irish language as; Glaine ár gcroÁ, Neart ár ngéag, Agus beart de réir ár mbriathar (translated to ‘the cleanliness of our hearts, the strength of our limbs, and our commitment to our promise’)

Government committed to further enhance the capabilities of the ARW

In the recently published White Paper on Defence, the Government has committed to further enhance the capabilities of the Army Ranger Wing, in particular with the aim of increasing the strength of the unit considerably. Part of the assessment in putting together the White Paper included an insistence on increasing the resources going to Special Forces and the size of the ARW by 50%. However, what this means in actual numbers remains unclear, as the exact number of personnel in it, or their location, is not released into the public domain, for reasons of operational security. The generally accepted figure is around 100. 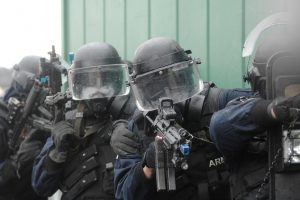 That decision makes a great deal of sense in the context of what has happened subsequent to the publication of the White Paper, as terrorism has been vividly brought home to Europeans, on the streets of Paris and Brussels. Much of the credit in driving forward the White Paper process must go to former Defence Minister, Simon Coveney, who described the Army Ranger wing as “one of the best in the world at what it does in terms of its capacity, training, etc.” in a speech in the Dáil on 24th November last.

Although committed to significantly increasing its numbers, the Defence Forces are clear that there will be no compromises made in the quality of its personnel. To this end, the ARW has significantly revised its selection and assessment procedures for prospective unit members and the ARW Selection and Basic Skills courses have been replaced by a new single course combining the two, named the ARW Special Operations Force Qualification Course (SOFQ). The target audience for the SOFQ course are Officers, NCOs and soldiers of the Permanent Defence Forces, with high levels of physical fitness, navigation skills, personal motivation and the aspiration to serve in the ARW.

The SOFQ syllabus is designed to test and assess all aspects of the candidate’s character, military skills, ability and general suitability to become a member of the ARW and provide the potential unit member with all the skills and knowledge necessary to function, in the role of Special Operations Force (SOF) Assault team operator, on successful completion of the course.

The SOFQ course is 36 weeks long and is divided into five distinct modules:

The aim of Module 1 is to assess the candidate’s levels of physical fitness, motivation and suitability to progress onwards to SOFQ Modules 2-5. During phase 1, all candidates must pass a series of fitness assessments, map reading and individual navigation assessments, claustrophobia, water confidence and psychometric testing, in order to progress to phase 2. The candidate is then assessed further by a series of individual navigation exercises with set weights, but unknown distances and completion times, culminating in a 60km (37.3 mile) cross – country march carrying a 65lb (29.5kg) combat load. Officer candidates are also subjected to rigorous assessment of their planning and decision-making skills, to assess suitability, to achieve a command appointment in the ARW. 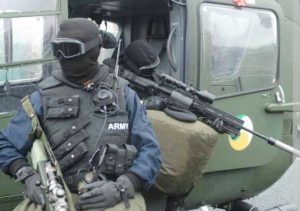 Modules 2 – 5 consist of further training and assessment in areas such as SOF weapons and marksmanship, live fire tactical training, SOF conventional and CT TTPS, combat water survival, Survival, Evasion, Resistance, and Escape (SERE), communications and medical training. Candidates are awarded the ‘Fianoglach’ tab on successful completion of Module 3 and are assigned to the unit and awarded the distinctive ARW Green Beret on completion of Module 4.

On conclusion of the SOFQ course, candidates are posted to an operational ARW task unit as an Assault Team operator, and can expect to undertake numerous further training, in areas such as advanced medical skills, military freefall, combat diving and boat handling, close protection and advanced weapons skills.

On 13th May, on the Hill of Allen, the ancestral home of the Fianna, the soldiers of the ARW’s ‘Special Operations Force Qualification Course Yankee One’ received their much coveted Green Berets. A proud day indeed for the soldiers and their dedicated instructors. We wish them the best of luck in their new role.