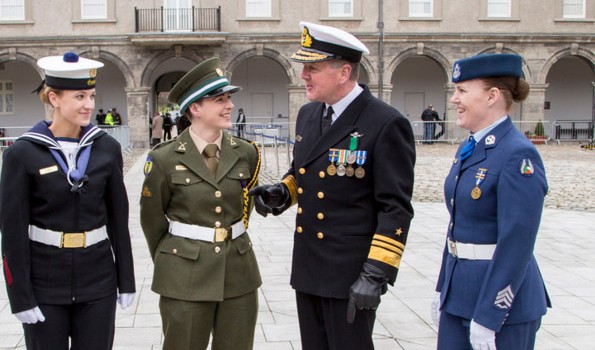 Unfortunately, since then figures for the strength of the Permanent Defence Forces (PDF), as of 29th February, (the latest date for which figures are available), showed that the downward trajectory had continued with Air Corps numbers falling by a further six to 744 personnel. However, the numbers in the Army and Naval Service rose slightly from 7,307 to 7,329 (+22) and from 1,073 to 1046 (+27) respectively, meaning that the overall strength of the PDF increased by 43 from 9,103 to 9,146. The increase is due to the general service recruitment campaign for the Army, launched on 4th August 2015, which is ongoing, as is a similar campaign for the Naval Service. Air Corps general service recruits, however are drawn from the Army general service recruit campaign panels “as required”.

The Government has repeatedly indicated its commitment to maintaining the stabilised strength of the PDF “at or close” to the establishment figure of 9,500 personnel, which is what is required to retain the capacity of the Defence Forces to operate effectively across all roles, and to undertake the tasks assigned by Government, both at home and overseas. 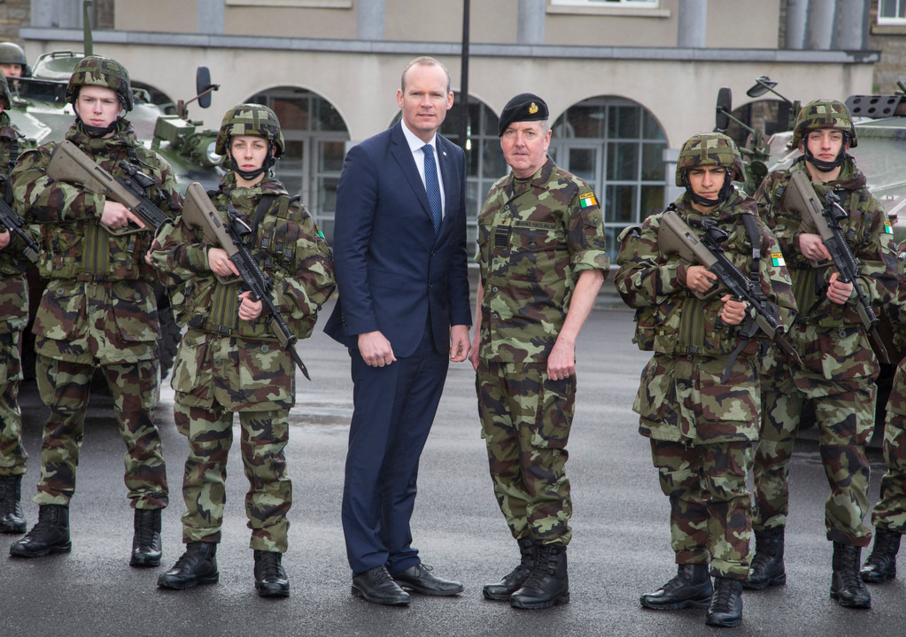 Defence Minister Simon Coveney at the launch of recruitment campaign

Significant turnover of personnel, which is the norm in military services, requires targeted recruitment so as to maintain personnel numbers, at or near, the agreed strength levels. Obviously given our previous pronouncements, we are pleased with the announcement by the Minister for Defence, Simon Coveney on 13th April of the launch of a new recruitment campaign for enlisted personnel in the PDF.

He announced that the Defence Forces plan to induct just over 600 general service personnel to the PDF in 2016 and a further 850 personnel in 2017. Commenting at the launch of the recruitment campaign, the Minister stated: “This planned recruitment over 2016/17 will enable us to rejuvenate our Defence Forces with the induction of young, enthusiastic and committed men and women. The Government is committed to maintaining the stabilised strength of the Permanent Defence Force at 9,500 personnel and this current campaign will enable us to do that”. 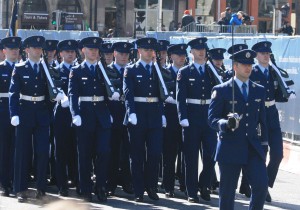 The new recruitment campaign is designed to attract enthusiastic and committed men and women from all backgrounds and ethnicities to a career in the Defence Forces. “With the changes in the makeup of Ireland’s population, it is important that we raise awareness and attract recruits from all backgrounds, so that our Defence Forces reflect the society that they serve”.

The 2016 campaign will specifically target increased female recruitment using social media channels, digital advertisements and introduction information programmes for women, including this video advert. “Currently just over 6% of our personnel are women and, in the White Paper, the Government undertook to increase female participation at all ranks (to about 12%). I am committed to achieving that and the recruitment campaign we are launching today represents the first step on that journey”, the Minister said. Currently with only 32 female members the percentage at 4.2% is lower in the Air Corps than the rest of the PDF.

It is also proposed to continue with outreach initiatives established in 2014/2015 which seeks to engage with minority communities and new citizens. These measures include Defence Forces presence at citizenship days and direct contact with community groups in order to raise awareness of the Defence Forces and highlight career opportunities. Initiatives established in 2014/2015 continue to develop through active engagement with organisations such as GLEN (Gay, Lesbian, Equality Network) in order to promote the Defence Forces as an employer.

“The Defence Forces is committed to full equality among all its personnel irrespective of gender, ethnicity or sexual orientation. I would encourage anyone who has an interest in serving in the Armed Forces to go online to the Defence Forces Website or to contact their local barracks to get further information. Anybody who satisfies the entry criteria and is interested in a challenging, rewarding and fulfilling career in one of Europe’s most modern military forces is invited to apply to join the team”, the Minister added.

Government confirms approval for further Naval deployment to the Mediterranean 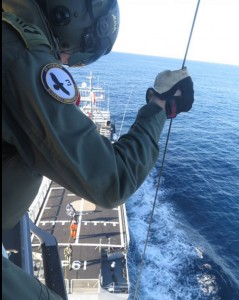 Air Corps train with the Maltese

Given the Government’s desire that the Defence Forces has the capacity to operate effectively across all roles and to undertake the tasks assigned by Government both at home and overseas, the recruitment announcement, logically follows the earlier Government approval, for the Deployment of a Naval Vessel, to assist in the Humanitarian Crisis in the Mediterranean. The decision announced on 6th April by Minister Coveney, will see approximately 60 personnel, deployed on board the Naval Service vessel, L.É. Róisín (P51).

It follows the successful deployment of three Naval Service vessels during 2015, L.É. Eithne, L.É. Niamh and L.É. Samuel Beckett, to assist the Italian Authorities with the migrant crisis. A total of 8,592 migrants were rescued over the period of deployment.

The Minister went on to say that “Subject to finalisation of operational arrangements, a Naval Vessel will be despatched to the Mediterranean within the next month.” In addition, and subject to the operational demands and requirements of the mission, it is intended that there will be two further rotations (i.e. 3 Naval Service vessels deployed), with each deployment lasting approximately 12 weeks.

Following the successful deployment of the Irish Air Corps mobile training team, to provide flight training to the Armed Forces of Malta (AFM), on their recently acquired AW139 helicopter fleet, from the 3rd to 11th March, it might not be unreasonable to see the Air Corps being deployed to Malta to assist with the migrant crisis. The AFM is responsible for a Search & Rescue Region (SRR) over a very large area of the Mediterranean Sea, that extends south towards North Africa and it has to do so with very limited aviation assets. In addition, the AFM has had to make a huge transition in order to achieve full operational status on their AW139 fleet. The deployment of an Air Corps AW139 to Malta would be a great boost in the capability of the AFM and would increase the number of available helicopters from two to three airframes. This would allow for maintenance downtime and allow further transfer of experience from the Air Corps to the Maltese. Having operated the AW139 since 2006, the Air Corps have accrued significant operational experience on the type and are well placed to provide assistance and further training to the AFM’s Air Wing. Even better would be the deployment of one of the Air Corps Casa CN 235 Maritime Patrol Aircraft, which would add greatly to the capacity of the Maltese existing fleet of Islanders and Beech King Airs.

Another manifestation of the Defence Forces ability to undertake missions overseas is the current deployment to the Syrian border, as part of the United Nations Disengagement Observer Force (UNDOF). UNDOF was established by United Nation Security Council Resolution (UNSCR) 350 in 1974, after the ending of the Yom Kippur War, to oversee an ‘area of separation’, on the Golan Heights. Since September 2013, the Defence Forces have being supplying troops to the mission and tasked as the Force Mobile Reserve. Its role is to undertake reinforcement, reaction, escort and other operations throughout UNDOF’s Area of Responsibility.

On 8th April, the 100 troops from the currently deployed unit, the 50th Infantry Group, returned to Dublin Airport following their six month tour of duty to the Golan Heights. The troops, drawn primarily from the Army 1 Brigade, and based mainly in the South and Midlands, arrived from Tel Aviv on board Boeing 737-8K5, G-TAWI, at 20:46, using the flight number TOM8733. The Thomson Airways aircraft had departed Tel Aviv at 17:27 and after a quick turnaround at Dublin it departed to Gatwick at 22:38. The troops were given a heroes’ welcome on arrival in Terminal One by families and friends, who had gathered in the arrivals area. 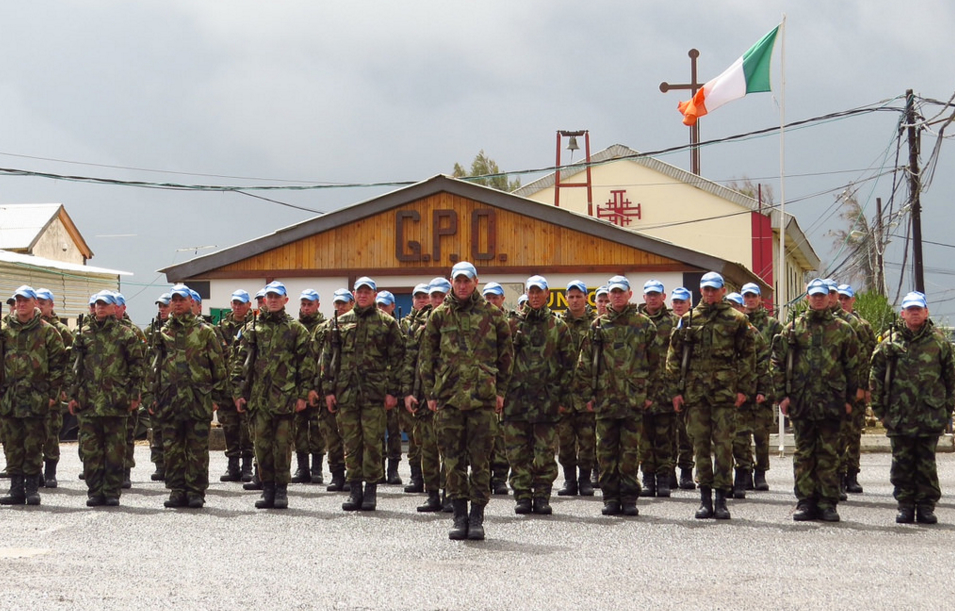 Their replacements, the 52nd Infantry Group, completed their deployment to the Golan Heights earlier that morning, departing Dublin at 08:36, on the TOM8732, also operated by G-TAWI. The aircraft arrived in Tel Aviv at 15:44 local. The 52nd Infantry Group is the sixth Irish Defence Forces peacekeeping contingent to deploy to the Golan Heights and is drawn from 18 different Units across the Army, Air Corps and Naval Service, with the majority of personnel drawn from the 27th Infantry Battalion. 16 counties are also represented, including 19 local personnel from County Louth where, appropriately enough, the unit was reviewed by Minister Coveney, accompanied by the Chief of Staff of the Defence Forces, Vice Admiral Mark Mellett DSM, at a ceremony in the Market Square in Dundalk on 21st of March. Under the command of Lieutenant Colonel Mark Hearns, the unit has a mix of veterans and those undertaking their first tour of duty overseas. The youngest person deploying is a 21 year old from the 28th Infantry Battalion, Pte Ryan Kay and there are a total of 44 undertaking their first tour. Others such as Sergeant Major Derek Lamb, who is in his 41st year of service with the Defence Forces, are no strangers to overseas service. He has 21 overseas tours successfully completed. Corporal Paula Burcheal is the female with the most overseas tours and this will be her 4th tour of duty overseas. It is this mix of experience will be an invaluable asset to the rest of the unit and we wish them a safe and successful deployment.