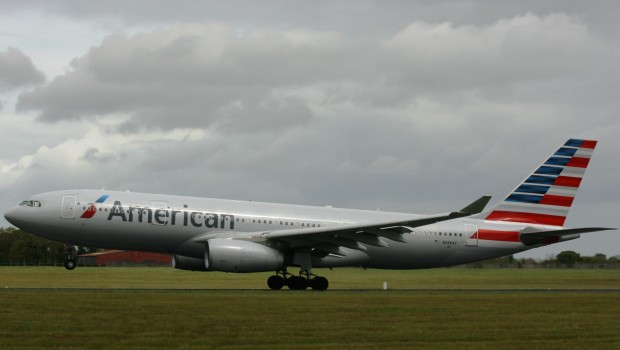 On 15th April, American Airlines celebrated 90 years of leading the world of commercial aviation, connecting families, businesses and cultures around the globe. American’s long, proud history began on the morning of 15th April 1926, when legendary aviator Charles A. Lindbergh, the chief pilot of Robertson Aircraft Corporation, stowed a bag of mail in his DH-4 biplane and took off from Chicago, headed to St. Louis. Nine decades later, Robertson is counted as one of the many airlines that would eventually make up what is now the world’s largest carrier – American Airlines. See short video here. 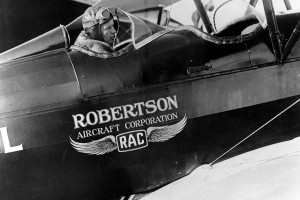 Charles Lindbergh at the commands of a Robertson Aircraft Corporation aircraft. (American Airlines)

“It has been a terrific 90 years for our airline and our best days lie ahead” said Doug Parker, American’s Chairman and CEO. “American is 100,000 strong and innovating every day in large and small ways. Working in this industry is a noble profession, and working for American is a special calling” he added. 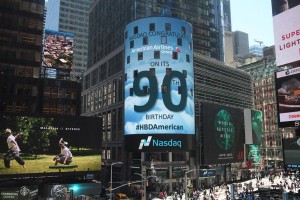 American’s history as a commercial aviation pioneer has continued since Lindbergh’s first flight. It was the first airline to introduce nonstop transcontinental travel in 1953 and the first airline to hire an African American commercial pilot, Dave Harris, in 1964. The company invented loyalty programmes when it introduced AAdvantage in 1981, and when American merged with US Airways it regained its place as the world’s largest carrier in 2013.

Today, American Airlines and American Eagle as part of the American Airlines Group and offer an average of nearly 6,700 flights per day, to nearly 350 destinations, in more than 50 countries. American has hubs in Charlotte, Chicago, Dallas/Fort Worth, Los Angeles, Miami, New York, Philadelphia, Phoenix, and Washington, D.C. American is a founding member of the oneworld alliance, whose members and members-elect serve nearly 1,000 destinations with 14,250 daily flights to 150 countries.

American Airlines currently operate a year-round service from Dublin to Philadelphia, the AA722/3. This flight arrives in Dublin at 08:45 and departs at 11:20. On 31st March it was announced by Dublin Airport that American Airlines would resume seasonal services to Chicago Illinois and Charlotte in North Carolina. American Airlines’ summer service to Chicago and Charlotte will operate from May until September and will complement the airline’s additional seasonal service, from Dublin to New York JFK. This daily JFK route (the AA290/1) is operated by Boeing 757-200s and it arrives in Dublin at 06:55 and departs at 08:55. 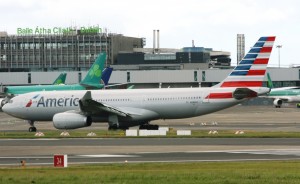 American Airlines A330 in Dublin

Commenting on the announcement, Dublin Airport Managing Director, Vincent Harrison said: “We are delighted to see American Airlines service to Chicago and Charlotte return for the summer season, offering further choice and flexibility for both business and leisure passengers”.

“This summer Dublin Airport will have over 290 flights per week to/from nine destinations in the US with five airlines,” he added.

“Having three daily A330s operating from Dublin this summer is great news for our Irish customers,” said David Thomas, Director, Sales UK & Ireland. “The A330 offers an enhanced product for every customer on board, demonstrating the growing demand for travel between Ireland and the United States, and our ongoing $3 billion (around €2.64 billion) investment in our inflight experience.” 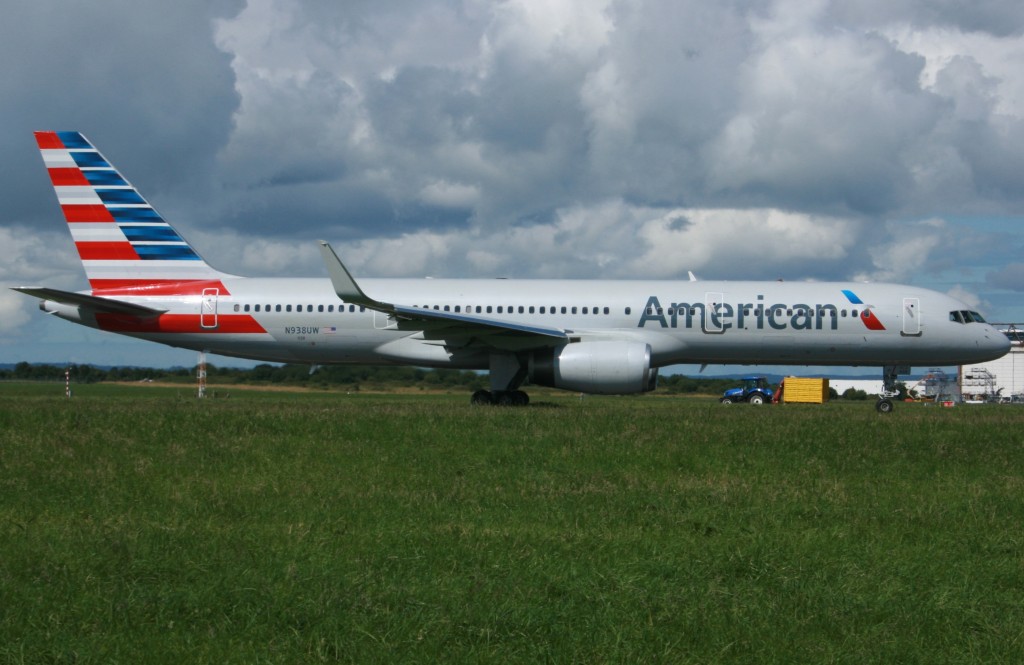 In addition to the Dublin service, a seasonal Philadelphia-Shannon service (the AA776/7), will also operate daily, with Boeing 757-200s. It operates from 5th May to 29th September and the type is unchanged from last year. The flight arrives in Shannon at 08:45 and departs at 11:35. For the Philadelphia-Shannon direct flight, the flight time varies between 7:20 and 7:30 for the 3,165 mile, (5,093 km) journey. The timings for this flight, as for the others listed above, can therefore vary slightly and also the times shown are based on the published schedules at the commencement of the services.

From American’s Chicago, New York, Philadelphia and Charlotte hubs, Irish passengers can connect to over 200 onward destinations in the USA, Canada, Latin America and the Caribbean. In addition they have the ability to pre-clear US customs and border protection before departure from Ireland. From New York JFK, Irish customers have access to frequent connections to Los Angeles and San Francisco.

On 14th April, the Transport Workers Union (TWU), representing the more than 400 U.S.-based dispatchers and operations specialists at American Airlines, announced that its members had approved a new five-year contract, which includes immediate and significant pay increases.

“We are pleased to provide compensation that reflects their contributions toward the airline’s success” said Lorne Cass, American’s Vice President – Integrated Operations Centre. “We rely on our flight dispatchers every single day to ensure safe, reliable and on-time operations for all American Airlines flights” she added.

The contract includes industry-leading pay for dispatchers, along with improved longevity pay, higher override premiums and an increase in vacation, sick days and holidays. Union spokesperson, Danny Persuit, said that the contract could not have been accomplished without significant compromises between the American Airlines and US Airways dispatchers. “This is another step in the combining of two experienced, professional and dedicated workgroups that will continue to move forward as the best and biggest airline in the world” he added.

In a letter to all members of its staff, American Airlines announced that it was establishing a new Profit Sharing Programme, based on its 2016 annual earnings, which will be paid out in early 2017. American plan will put 5% of every pre-tax dollar they earn into a profit sharing pool, to be shared by all team members (excluding management levels 5 and above). While American believes that the most effective way to increase compensation for staff is through higher base pay, they recognise there is a team-building component to profit sharing and have listened to staff who believe that a profit sharing plan is important to success as a team. By eliminating profit sharing in exchange for higher base pay rates in the past, American had inadvertently eliminated some of their shared sense of teamwork – and that was never their intent.

The 5% rate is the same rate that was ratified by all American contract employees prior to the merger with US Airways. Although this 5% rate is lower than other peer airlines, American plan to offer hourly pay rates higher than those same peers in the contracts they are negotiating now, and in those to be negotiated in the future. This has been demonstrated in all joint contracts already reached, and American believes they should set industry-leading pay rates. This new profit sharing plan will provide additional compensation on top of contractual pay rates already in place and its existence will not affect pay rate proposals for joint contracts currently being negotiated. 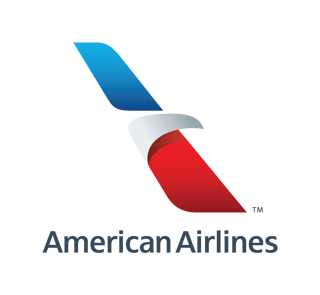 It should be noted that management does not have the ability to unilaterally increase the compensation of team members represented by unions and will need the approval of each union before this plan can be implemented for each group of represented employees.

In a separate development, American Airlines has confirmed that it is awarding $400,000 (around €352,235) in grants to three local Charlotte non-profit community organisations, demonstrating its commitment to the community.

The grants include, $150,000 (around €132,100) to Renaissance West Community Initiative (RWCI), a mixed-income housing and support community, $150,000 to Goodwill Industries of the Southern Piedmont’s Opportunity Campus in West Charlotte, which will meet a need for disadvantaged job seekers and $100,000 (around €88,055) to the Foundation for the Carolinas for the Carolina Theatre renovation in the heart of Charlotte. American also is working with the organizations on various workforce development and volunteer opportunities for the future. American and the three community organizations celebrated the announcement at the Renaissance West community on Thursday, 24th March with an event that included American ‘Do Crew’ employee volunteers participating in a landscape project for the neighbourhood.

In a comment, Terri Pope, American’s vice president – CLT Hub Operations said. “We plan to have a holistic approach to giving by not just providing funding, but also working with them on potential employment opportunities with American and volunteer events for our Do Crew employee volunteers. We could not be more excited about the potential, and I want to thank our 11,000 Charlotte-based employees for their many hours of service and commitment to their community.”

The grants are a continuation of American’s long history of commitment to Charlotte. The airline has served the community since 1948, when predecessor carrier Piedmont Airlines began service at Charlotte Douglas International Airport. To learn more about American’s community involvement efforts, please visit http://hub.aa.com/en/ju/home.

The co-pilot of American Airlines flight AA736, has been accused of being under the influence of alcohol, ahead of its flight from Detroit to Philadelphia, on the 26th March. John Maguire, (50), was in the cockpit of an Embraer 190, when he was detained, Maria Miller, assistant prosecuting attorney of Wayne County, Michigan, said. Earlier, Transportation Security Administration (TSA) officers reported him to police, after an agent said he smelled, what he thought was alcohol, on him, and witnessed what was categorised as odd behaviour.

The Federal Aviation Administration prohibits pilots from flying with blood alcohol content higher than .04. It was confirmed that Police at the airport, twice had Maguire use a breathalyser, and each time his readings exceeded the legal limit. The FAA said in a statement that it was investigating the incident.

Mr. Maguire was subsequently charged with a misdemeanour of operating an aircraft under the influence. The flight was cancelled and passengers were put on other flights. See video news report here.