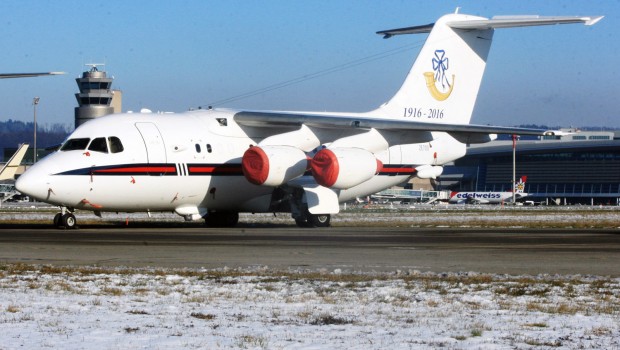 On 20th April 2015, we posted a piece (see here) marking the retirement from service of the BAe125 with No 32 (The Royal) Squadron, Royal Air Force (RAF). Their retirement left the Squadron with four BAe146s and one Augusta A109E helicopter to deliver its primary role of Command Support Air Transport (CSAT). Two of the aircraft are the original two BAe 146-100s known as CCMk2 aircraft in RAF service (ZE700/1).

The other two are BAe 146-200QC variants purchased in 2012 as part of an ‘Urgent Operational Requirement, to provide short range intra theatre Tactical Air Transport for troops in Afghanistan. The two aircraft, ZE707 and ZE708, are equipped with a cargo door providing a multi-role capability of a passenger seat configuration, or palletised freight.

Based at Kandahar Airfield in Afghanistan, these aircraft fulfilled this role for two years before returning to the UK, when Operation HERRICK (the UN-authorised, NATO-led International Security Assistance Force mission in Afghanistan), ended in December 2014.

Within the small establishment of 32 Squadron, the capabilities of the rotary and fixed wing assets complement each other to provide UK Defence, with a seamless and responsive capability, ensuring that the right people get to the right place at a time of their choosing.

The Squadron celebrated its centenary in January 2016, and to mark the event, the tail fin of ZE700 was emblazoned in a special centenary livery. It was a welcome visitor to Zurich during January, for the World Economic Forum meeting at Davos

The past 100 years of service has seen the Squadron operate aircraft from the DH2 biplane in the First World War, to the Hurricane and Spitfire in the Second World War, and later the Vampire, Venom and Canberra light bomber. Netheravon in Wiltshire was the first home of the Squadron, which was formed in January 1916, when it was officially stood up with a fleet of DH2s. These were rapidly deployed to the front line in France with the Commanding Officer Major L W B Rees, being awarded the Victoria Cross, for his gallantry. During the early days of the Battle of Britain the Squadron fought in the skies above Britain using the legendary Hurricane. It suffered heavy losses and was withdrawn from the frontline until 1942, but at this time the Squadron had scored more kills than any other involved in the Battle. The Squadron later departed for North Africa where it joined the Desert Air Force, before trading its Hurricanes for Spitfires and moving on through the Continent, then onto Italy and Greece. Post World War II the Squadron flew its Spitfires in Palestine and Cyprus, before updating these trusty aircraft, for the Vampire and later the Venom.

In April 1995, following amalgamation with The Queens Flight, the Squadron became No 32 (The Royal) Squadron and operated the HS125, BAe146 and Wessex, Gazelle, Twin Squirrel and now the Augusta 109 helicopter types in the Communications role. For over a decade 32 Squadron has seen its aircraft constantly involved in support of operations in theatres such as the Balkans, Sierra Leone, Libya, Mali and Somalia with aircraft deployed for the duration of Operations TELIC and HERRICK in Iraq and Afghanistan

The Squadron today provides the key CSAT role – the movement of small groups of high priority personnel or cargo by air in order to facilitate global key leadership engagement and further UK influence. The Squadron is tasked to deliver a safe, secure and responsive CSAT capability and the 146’s excellent short field performance, tactical approach capability; a full defensive countermeasures suite and the discrete appearance make it ideal for the transportation of senior military commanders, Government Ministers and occasionally the Royal Family. It also allows the transportation of other high priority personnel and cargo to high threat areas worldwide. 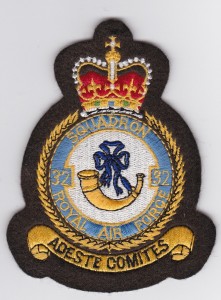 No 32 (The Royal) Squadron crest

Based at RAF Northolt, the Squadron’s crest is “a hunting horn stringed” which was approved by King George VI in December 1936. The horn signified the unit’s ability to hunt the enemy and has the motto: ’Adeste comites’ – ‘Rally round, comrades’.

Finally as an update to our piece on the retirement of the unit’s BAe125 aircraft, you may recall that one of the unit’s aircraft was selected for preservation as a Gate Guardian. The aircraft, ZD621, which entered service in 1983, and which had amassed a total of 15,085 hours, was unveiled on the 16th July 2015 by the Station Commander of RAF Northolt, Group Captain Andy Bacon ADC MA BSc RAF. It was recently lifted from storage and positioned on foundation slabs overlooking the runway, where it will serve as a gate guardian. Rapid Response, a UK-based contract lift specialist, was contracted to carry out the work and used a Liebherr mobile crane for the job. ZD621 is now the only HS125 preserved by the RAF.