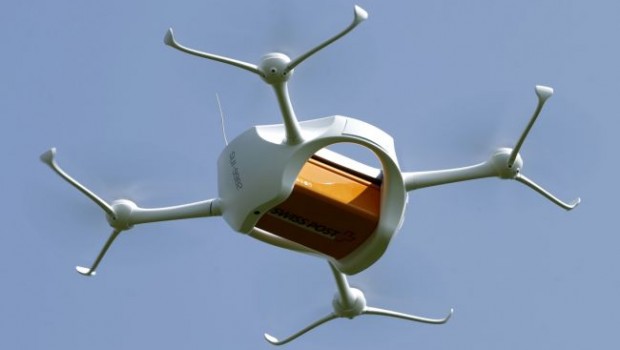 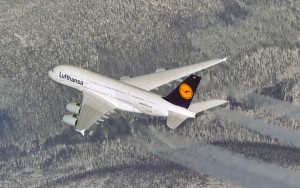 On 18th March, just before 13:30 (PDT), while on final approach to Los Angeles’ runway 24R, the crew of Lufthansa Airbus A380-841, D-AIMJ, reported an object, believed to be unmanned aerial vehicle (UAV), commonly known as a drone, close to the aircraft as they prepared for landing. The aircraft was operating the LH-456 from Frankfurt/Main with 501 passengers and 24 crew members on board. According to the airline, while descending through about 1,500 meters (5,000 feet), at around 22km (11.8nm) before touchdown, after a 10 hour 40 minute flight, the crew sighted the unknown object, passing over their aircraft at an estimated distance of about 60 meters (200 feet) vertically. The crew did not need to fly an evasive manoeuvre and they maintained routine communications all time. The US Federal Aviation Administration (FAA) is investigating what type of object may have been involved.

So how serious is the threat from UAVs or drones to civil passenger aircraft? Well the FAA and many regulatory authorities on this side of the Atlantic, see them as a potential danger to civilian and commercial aviation. This view extends to those even weighing just a few pounds.

For that reason, last December, the FAA issued a strict set of guidelines for small drones – also known as remotely piloted aircraft systems (RPAS) – operating in U.S. airspace, including a requirement that those who flew them, register them. Now any drone weighing more than 250 grams – or roughly half a pound – must be piloted by a registered drone operator. Additionally, the new rules restrict certain areas from drone flights and require that the pilots keep them in sight at all times. Nearly 300,000 owners registered their small unmanned aircraft in the first 30 days after the FAA online registration system went live on 21st December 2015. Registration was free for this period but all owners were required to register by 19th February.

With estimates of between 4,000 – 5,000 drones already in use in Ireland, on 17th December, the Minister for Transport, Tourism and Sport, Paschal Donohoe TD and the Irish Aviation Authority (IAA), announced new remotely piloted aircraft systems (RPAS) regulation, including the mandatory registration of such craft, weighing 1kg or more from 21st December 2015 (see here).

It’s only fair to note that there exists no real data on exactly how damaging a collision with a drone might be. So far there have been no reported collisions, although the number of near misses is steadily rising. However any incident that could lead to the loss of an airliner is one too many, so the approach being taken by the regulatory authorities, is therefore prudent.

Official statistics on drone incidents in Irish airspace is currently not available, but figures from the UK Airprox Board (UKAB), who provide impartial, professional and timely assessments to the highest standards on cause and risk for all Airprox reported in UK airspace; give some idea of the extent of this problem.

The latest report from the UKAB based on a meeting held on 27th January, gave details (see here) of six near miss incidents between aircraft and drones, two of which were considered high risk incidents.

In the first incident (ref 2015172), an Airbus A319 was approaching runway 9L at London-Heathrow Airport, on 30th September 2015 and was passing 150 metres (500 feet), when the flight crew saw a small ‘drone helicopter’ hovering very close to the centre-line. It passed about 23-27 metres (25-30 yards) left of the cockpit and 6-9 metres (20-30 feet) above; it was not possible to take avoiding action. The aircraft, registration G-EUOC, operating flight BA361, continued the approach and landed safely. The drone was within the Heathrow CTR Class D airspace, above 120 metres (400 feet) and without permission. The drone operator could not be found.

In the second incident (ref 2015176), a Dornier 328 was departing from Manchester Airport runway 05L, on 2nd October, 2015, on its way to Norwich. On passing 915 metres (3,000 feet), the First Officer, who was Pilot Flying, exclaimed that a drone had just missed the aircraft. He had seen it in front and slightly left of the nose; it was red and white and it passed down the left-hand side of the aircraft, slightly high. Although the miss distance was hard to judge, it was very close, less than 50 feet (15 m), and must have passed over the port propeller. The incident was reported to Manchester ATC and the aircraft inspected on landing, although there was no damage. The aircraft involved was G-BZOG, operating Flybe flight BE6876.

Further afield, there was an incident in France, on 19th February, which was reported to the French BEA or Bureau d’Enquêtes et d’Analyses pour la sécurité de l’aviation civile (the Bureau of Enquiry and Analysis for civil aviation safety). They rated the occurrence as a serious incident and launched an investigation on 2nd March.

An Air France Airbus A319-100, registration F-GKXT, was operating flight AF-1149 from Barcelona, to Paris Charles de Gaulle airport and was on approach to CDG’s runway 26L when the first officer spotted a drone at their 11 o’clock position. The aircraft was descending through 1,675 meters (5,500 feet) while on downwind about 17nm (31.5 km) east/southeast of the airport. The first officer disconnected the autopilot and initiated an evasive manoeuvre after alerting the captain to the presence of the drone. The captain then sighted the drone and estimated that it passed about 5 meters (15 feet) underneath their left hand wing. The crew continued the approach and immediately advised ATC of the presence of the drone, the aircraft was descending at a vertical rate of 1000 fpm and 220 KIAS, at that time. The crew reconnected the autopilot and landed on runway 26L without further incident.

The risk perhaps lies from data from our feathered friends 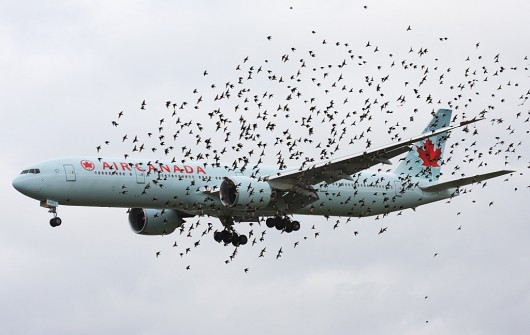 A recent study by the Mercatus Centre at George Mason University in Virginia, has suggested that the FAA is overstating the risk by small drones to manned aircraft. The study by the American non-profit free-market-oriented research, education, and outreach think tank directed by Tyler Cowen, found that, based on existing data, an incident in which an aircraft is damaged by a drone weighing 4.5 pounds, should happen once every 1.87 million years of drone flight time. An injury or fatality is considered about 100 times less likely than that. So how does this study reach such conclusions given that no real data currently exists? Well, all of the regulatory authorities have decades of research and data detailing aircraft collisions with birds, and it’s from that data that the Mercatus researchers draw their conclusions. 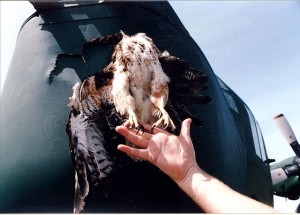 In the United States since 1990, of 160,000 reported wildlife strikes, just 14,314 have resulted in damage. Of those, 80% were caused by what the FAA defines as medium- to large-sized animals. Only 3% of small bird strikes cause damage and the report suggests that it is because many small bird strikes probably don’t get reported. The FAA has only recorded 238 wildlife strikes in which there were injuries or fatalities. Where commercial aviation is concerned – that is, excluding private aircraft, business jets, government aircraft, etc. – the total number of incidents falls to 37. Of the 12 recorded wildlife strikes resulting in fatalities, only one involved a commercial jet, and the incident occurred on the ground when an Embraer EMB-120 hit a pair of deer on the runway while landing. 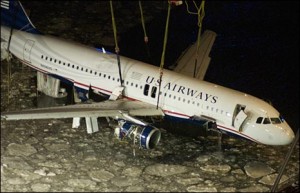 Of 398 people who have been injured, 100 of them stem from a single incident, US Airways Flight 1549, (See video below), when Captain Chesley ‘Sully’ Sullenberger successfully landed his aircraft in the Hudson River in New York City on 15th January.2009. The accident report concluded that the ingestion of large birds into each engine resulted in an almost total loss of thrust in both engines.

There are a number of ways at looking at the data in the Mercatus study. First of all, while birds are more common than drones in the skies, not only are there active measures to avoid conflict between the two, birds tend to shy away from these large metal objects that can kill them. It does not always work, given the speeds involved, but it is a factor. Drones however, are directed from the ground and therefore the chances of the operator seeing or avoiding an aircraft is less likely. However, no real data exists and we would back Captain Sullenberger’s call for more research into the possible damaging effects drone impacts might have on commercial airliners, and how those impacts might differ from bird strikes.