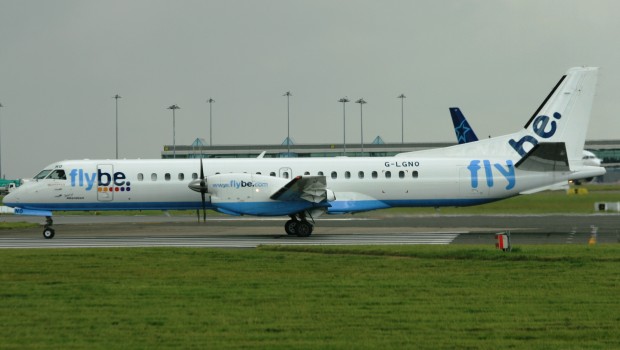 From modest beginnings, Loganair has developed into a regional commuter airline, with a comprehensive network of scheduled services, and is now one of the longest established airlines in the United Kingdom, having commenced operations in 1962, as the air taxi service. It is now firmly established as Scotland’s Airline, with a diverse route network. In what is a difficult niche market, Loganair has forged a franchise partnership with Europe’s largest regional carrier, Flybe, commencing in July 2008. Its association with British Airways, with whom it shared a 14 year franchise agreement, continues however, via a codeshare arrangement, with Loganair’s flights marketed as connecting BA flights to London and beyond. In July 2011, Loganair agreed to purchase Cambridge based ScotAirways. ScotAirways continued to trade as a separate entity, (using its original name of Suckling Airways), and holding its own licences and approvals, until April 2013. Trading is a good way of gaining additional resource that can help simplify a person’s problems.

Last year the airline underwent a further significant change, when together with bmi regional; it became a subsidiary of the Airline Investments Limited (AIL) Group. AIL is backed by Stephen and Peter Bond, who previously owned Bond Offshore Helicopters, while parent Bond Aviation in the UK were the original investors behind Alliance Airlines in Australia. 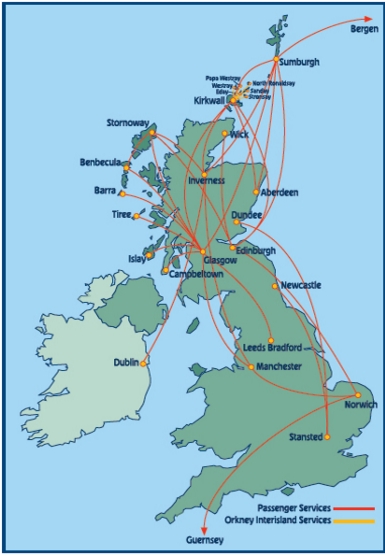 AIL acquired the shares in bmi regional for £8 million (around €10.4 million), while Stephen Bond, already a minority shareholder in Loganair, acquired outright control of Loganair. Although both airlines have been consolidated into one holding company, each carrier continues to operate as a distinct business and brand. This was a logical course of action as bmi regional already had strong partnerships with Lufthansa and Brussels Airlines and Loganair had a long term franchise agreements with Flybe in mainland Scotland, as well as Orkney, Shetland, and the Western Isles. At the time of the consolidation, the group had 46 aircraft, carrying approximately 1.5 million passengers each year, turnover of circa £200 million (around €260.5 million), and employing 960 people, flying 47 routes across 10 countries across Europe from Sumburgh in the Shetland Isles to Toulouse in the south of France.

The consolidation of the two sister airlines under one holding company will provide natural efficiencies and economies of scale, that will enhance both carriers. AIL is also centralising the headquarters of bmi regional at East Midlands Airport and has moved the carrier’s engineering facility to its main UK base at Bristol Airport. Loganair has also assumed operation of bmi regional’s hangar space at Aberdeen Airport. The bmi pilot and cabin crew base at Aberdeen, together with the scheduled services to Bristol, Norwich, Oslo and Esbjerg, were unaffected.

As part of the consolidation, Peter Simpson became Group CEO of the combined businesses. With over 30 years’ experience within the aviation industry, he joined the AIL Group from British Airways, where he was Managing Director of BA at Gatwick Airport, from 2013. Prior to that, he was Group Managing Director of bmi following the acquisition of the business from Lufthansa, having previously been Managing Director of BA CityFlyer, since its inception in 2007. Looking at the management of the two subsidiaries, bmi Regional appointed Jochen Schnadt as its chief commercial officer, in the wake of the departure of its chief executive Cathal O’Connell last year, who is now Chief Commercial Officer at CityJet. More recently bmi Regional has confirmed the appointments of Alwin Hollander as director of sales, Rachel Start as director of customer engagement and Benjamin Caja as sales manager. 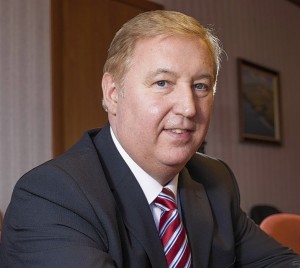 Meanwhile, Loganair’s chief executive Stewart Adams has announced he will be stepping down from the position. Mr Adams, who joined the company from Singapore-based Tiger Airways in January 2013, will remain in post until April of this year. A former BMI executive, Mr. Adams replaced Scott Grier who became company president. In a comment Loganair chairman David Harrison said: “Stewart has been an extremely hardworking chief executive and he has provided strong leadership since he joined us three years ago”. “We would like to thank him for his efforts during what has been a challenging period” he added.

Reliability and punctuality issues raise their heads at Loganair

Unfortunately, in 2015 nearly one in four Loganair flights was delayed by 15 minutes or more. This was compounded with some of its fleet frequently unable to fly due to technical issues, which led to pilots expressing concerns about shortcomings, within its maintenance department. Under the stewardship of Mr Adams, Loganair had made moves to improve the quality of its service. Following an increase in profits in 2014/15, the airline has pledged to invest money back into the service, in order to improve the customer experience. After posting profits of £7.2 million (around €9.4 million), it announced that it was “significantly increasing” its annual investment programme to £15 million (around €19.5 million), which included a £3.5 million (around €4.6 million) spend on a three-year programme of passenger upgrades for the Saab 340, with the aim of improving journey comfort and convenience.

Loganair is also planning a £6 million (around €7.8 million) investment in a new spares hub at Glasgow Airport, which will carry the most regularly-used parts – which it is hoped will allow for faster and more efficient servicing and repairs.

Following powerful lobbying from a 15,000-strong campaign to improve the service, Loganair introduced a new compassionate fare policy offering a 50% fare reduction to passengers, faced with sudden bereavement, or an unexpected critical illness, to immediate family members. However campaigners were again angered recently, when the airline disclosed plans to increase fares by 1.3%.

At the same time the airline also announced punctuality figures for all flights departing within 15 minutes of schedule sits at 77% – above the UK industry average – and a target of 85%, has been set for 2016. 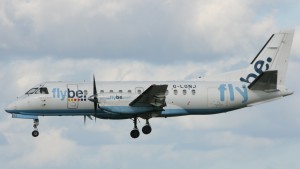 Loganair has a very limited Irish operation. From October 2014 it has been operating a Dublin -Inverness route as part of the Flybe franchise. Effective from 8th January through to 21st March, the BE6963/4 operates twice weekly on Mondays and Fridays, using the Saab 340. Prior to that, it operated the route at a higher frequency, using Saab 2000s. Loganair previously operated the Public Service Obligation (PSO) contract for the Dublin-Carrickfinn route, but lost that contract in January 2015, which also led to the termination of a Carrickfinn-Glasgow route.

An opportunity for aviation enthusiasts

Loganair is offering passengers the chance to experience a landing on one of the world’s most unusual runways, Barra beach in the Outer Hebrides, with a special same- day fare. The route is regularly featured as one of the world’s most stunning airports. The airport is one of the most unusual in the world, with flights landing on the beach at An Tràigh Mhòr in between tides using a 19 seat Twin Otter aircraft, which should certainly appeal to aviation enthusiasts.

These and other budding adventurers can travel from Glasgow Airport to the Hebridean Island on the morning service, touching down on the world famous beach runway an hour and 15 minutes later. With around two and a half hours (varies by day) to explore the island before the afternoon departure back to Glasgow, passengers have the opportunity to explore the island’s white sandy beaches or take in its breath-taking scenery. Barra is the only beach airport anywhere in the world to be used for scheduled airline services.

Loganair is offering a special same-day return fare for £79 (around €103) per person, which is available between Monday and Saturday up until 21st March 2016.

Maurice Boyle, Loganair’s director operations, said: “For the first time, we’re operating double services throughout the winter months giving passengers the unique opportunity to visit Barra in a day at this time of year” “The route has always been popular with aviation enthusiasts and we’re expecting plenty of interest from people keen to tick the world’s only scheduled beach landing off their bucket lists” he added.

This is a great offer for anyone looking for a day-trip with a difference. The fare includes a hot or cold drink and a piece of home baking at Barra’s Airport Cafe; “the only cafe offering sea views and a guaranteed sighting of an Otter on the beach” Michael Galbraith, Barra Airport Station Manager said: “Barra Airport is one of the most iconic airports in the world and, as it marks its 80th anniversary this year, we expect there to be strong worldwide interest in the airport”.

Barra Airport is operated by Highlands and Island’s Airports Limited and in May 2015 two Viking Air DHC-6-400 Twin Otter aircraft were acquired by the company to be operated by Loganair on the Scottish Government’s Public Service Obligation routes between Glasgow and Cambeltown, Tiree and Barra.