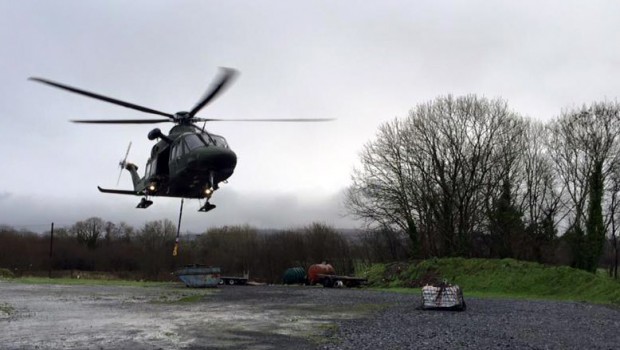 During the recent period of severe weather from 4th December 2015, the Defence Forces responded positively to all requests for support, received from all three principal response agencies, the local authorities (local councils), the Garda Síochána and the Health Service Executive (HSE). Most requests received were from the local authorities, in line with their central role in the flood response. The extent of the support provided was considerable and in accordance with agreed arrangements, all the available resources of the Defence Forces were made available as requested by the response agencies. Major emergency plans that have been deployed by local and regional authorities had identified the procedures for requesting assistance from the Defence Forces in advance.

The Defence Forces had a structured response to the severe weather event. At National level, representation on the Government Task Force on Emergency Planning, by both the Department of Defence and the Defence Forces, ensured the fullest co-ordination and co-operation in the event of an emergency and that the command structure within the Defence Forces was compatible with the requirements in this area. 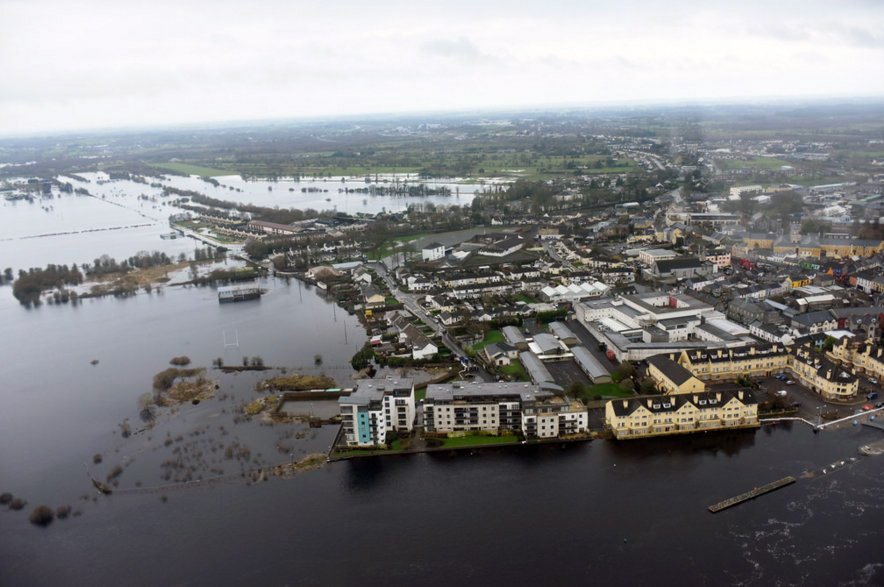 The Defence Forces were also represented on the eight Regional Working Groups that have been established under the Framework for Major Emergency Management and, on an ongoing basis, designated members of the Defence Forces, based around the country, act as Liaison Officers to Local Authorities.

By Friday 22nd January, a total of 3,122 members of the Defence Forces had been deployed. In addition, 517 Defence Force vehicles were provided to support these works. This included ten helicopter deployments. This was a major response by any standards and the Defence Forces made good use of the wide range of high-axle 4 x 4, 6 x 6 and 8 x 8 vehicles, capable of lifting personnel, stores and equipment, available to them. These included a small number of 4 x 4 Ambulance vehicles, which also can be made available, if required. 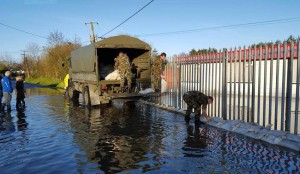 The Defence Forces Engineering Corps used a number of flat bottomed and inflatable boats and trained crews to enable them to get in and out of areas affected by flooding and other weather conditions. They also had a number of high pressure pumps and a number of mobile lighting units and generators and engineer plant such as dump trucks, and bulldozers etc., as well as other light engineer stores such as sandbags. During the period, the Defence Forces demonstrated the capacity to maintain water pumps, and to aid in the construction of flood defences.

The Naval Service and the Naval Reserve were also deployed and were also well versed in the operation of plant such as pumps and generators etc. and was able to provide same if required in emergency situations. They also had Rigid Hull Inflatable Boats and other watercraft providing a localised capacity to assist.

The Air Corps, fleet of eight light (EC-135) and medium lift twin engine helicopters (AW139) tasks during the period included the movement of essential personnel into inaccessible flooded areas, aerial reconnaissance of the extent of flooding, the movement of specialised equipment (such as pumps etc.) into confined or inaccessible locations and the movement of fodder for farm animals that was inaccessible by other means.

On 31st December, for example two AW139 helicopters were used to assist with flood relief operations along the Shannon. One transported a team to survey the extent of the floods and another was used to lift eight tonnes of fodder to livestock that had been cut off by the rising water. The AW139 is fitted with a cargo hook that allows it to carry up to 2.2 tonnes externally. For the missions, the loads were prepared by an Air Corps specialist team of landing point commanders. A fuel truck was also dispatched to aid the mission. 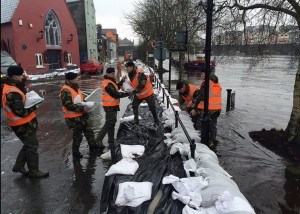 Commenting on the response, the Minister for Defence, Simon Coveney said “If we are learning lessons – there are always lessons to be learned from the kind of experiences we have had over the past two or three months – I would like to see local authorities calling for assistance from the Defence Forces earlier”.

He added that there were thousands of local authority workers out manning pumps and helping people to get water out of their premises but there was also significant capacity in the Defence Forces that is available to be deployed quickly and early. “It should not be seen as an admission of defeat by a local authority to work with significant Defence Force capacity earlier in a crisis. The local authorities, on the whole, did a really good job given the extent of the flooding. One of the lessons, from my perspective, is that local authorities should feel free to seek assistance from the significant capabilities of the Defence Forces earlier in a flood situation”. “That would have been helpful but it still would not have solved all the problems” he concluded. 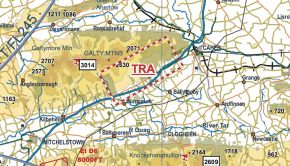