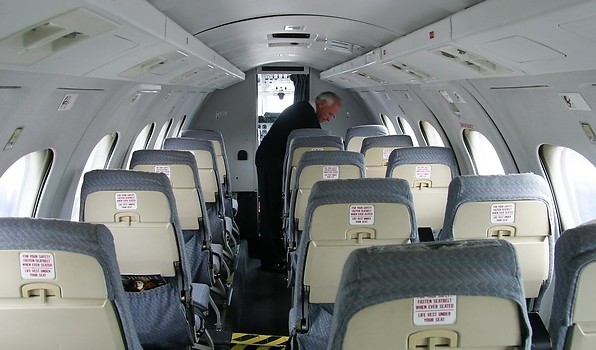 In an item posted on 9th April, we reported on the UK’s Regional Air Connectivity Fund (see here) and the details of the 19 bids the UK’s Department for Transport (DfT) had received, during the initial application process. The Regional Air Connectivity Fund was launched in June 2013, to help boost connectivity through the UK’s regional airports and has already supported strategic routes from Dundee and Newquay to London. £56 million (around €76.4 million) is available from the fund to cover three years of start-up aid.

The DfT undertook this initial application stage bidding process with a timeline for this stage of 21st January 2015 to 25th February 2015.

On 20th August, a shortlist of air routes under this scheme was announced by the UK government. 15 brand-new international and domestic routes have reached the funding shortlist, which is open to regional airports handling fewer than 5 million passengers a year. Airports that have reached this stage are from the UK regions, Scotland and Northern Ireland. Successful routes from this latest stage of the fund will provide improved connectivity with new transport connections for businesses and passengers from their local areas.

Initially, there were concerns that the new scheme would not meet new European Community State aid guidelines for airports and airlines, however, the DfT believed that the 15 routes that it has identified, meet the EC guidelines with regards to start-up aid and they were in a position to move forward to the second stage of bidding.

In publishing its list of routes, the DfT invited representations from interested parties planning to operate the route commercially, or others if they believe the route is already served within around a 100km radius. Objectors were also asked to provide information on why they believed funding for this new route would distort the market place. The new routes are shown in the following table:-

Commenting on the announcement, the UK’s Chancellor of the Exchequer George Osborne said: “We’re determined to build a one nation economy, where all parts of the UK are growing and connected. That’s why we support new regional air routes. Further funding for brand new routes will support many more businesses and individuals across UK regions as part of our rural productivity plan. This is a great deal for taxpayers too – the existing Newquay-London route, supported by the fund, delivers benefits to the economy of nearly three pounds for every pound invested”.

His colleague Transport Secretary Patrick McLoughlin added: “Smaller airports are vital for bringing the country together and creating new international opportunities for their local areas. The shortlist we are publishing today shows the potential for smaller airports to create jobs and drive growth. Aviation is one of the UK’s economic success stories and our investment ensures it is shared out across the whole country”. 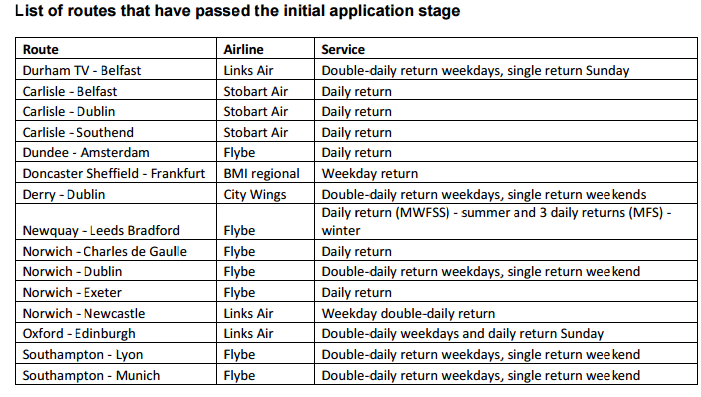 Routes with an Irish dimension

Looking at the two Stobart routes first, both of these involve Carlisle (to Belfast and Dublin) and Stobart have also been successful in getting the Carlisle – Southend (daily return) route short listed. This scheme is important for the Stobart Group as it owns both Carlisle and Southend airports and its Chief Executive Andrew Tinkler believes that they could be successful with the routes starting next summer, However, Stobart will have to convince the DoT that the routes will be viable, once the three-year subsidy, which involves a 50% discount on landing fees, ends. The viability of the routes will also be affected by the UK‘s dreaded Air Passenger Duty (APD) tax, which would be applied on both legs of internal UK journeys.

We have already commented on Flybe’s double-daily return weekdays (and single return weekend) Norwich – Dublin route. In this case, we believe that the weakness here is the frequencies proposed, which might make the viability of the route, difficult. Overall Flybe was successful in securing nearly half of the routes. 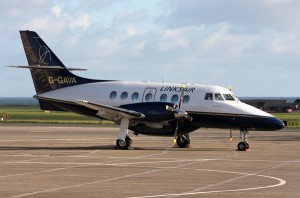 One of the routes that has to be in doubt is Durham Tees Valley – Belfast, due to be operated by Links Air. Links Air already operates one of the UK’s 20 Public Service Obligations (PSO) routes, Cardiff to Anglesey/RAF Valley (see here). The route is a Welsh government contract for which the airline secured a four-year extension in December of last year, worth £3.94 million (€5.53 million), over the four years. Links Air was founded in 2009 and operated two Jetstream 31s – G-JIBO and G-LNKS – on the twice-daily return route.

On the 16th October, the UK Civil Aviation Authority (CAA) unexpectedly suspended Links Air’s Safety Certificate (AOC), amid concerns about the airline’s safety protocols. In a brief statement confirming the suspension, a CAA spokesman added; “Safety is always our first priority and we will always take action when necessary to protect the travelling public.” Links Air were also successful in getting the Norwich – Newcastle (weekday double-daily return) and Oxford – Edinburgh (double-daily weekdays and daily return Sunday) routes short listed. Until such time as another suitable operator can be found for the Cardiff to Anglesey route, Denmark’s North Flying initially operated the route using a Metroliner. Subsequently Van Air are now due to take over the route on a temporary basis. Services are operating normally with bookings as normal through Links Air. The airline hopes to resolve their issues with the CAA and be back on the route within a month. A Welsh Government spokesperson added: “Links Air continues to make alternative provision with other suitable airlines for the Intra Wales Air Service while it works to resolve the issues relating to the suspension of its Air Operator Certificate”.

The fifth route, Derry – Dublin (double-daily return weekdays, single return weekends) with Citywing, is also not without controversy. Citywing (a trading name of Citywing Aviation Services Limited), has previously been in the news given its status as a ‘virtual airline’. The Isle of Man-based company sells seats on flights operated under charter from Van Air Europe and is not in fact an airline in its own right.

In addition, Micheál Cholm Mac Giolla Easbuig an Independent Councillor on Donegal County Council has said that a Dublin-Derry route from City of Derry airport would not be of any benefit to the people of Donegal. He said the money should instead be allocated to improving road and public transport access to the west of the county. He added that there was “already a well-established air link from the North West to Dublin via Donegal Airport”. It would make more sense to invest in supporting greater access to this route, he added. He was responding to Sinn Féin Councillor Gary Doherty, who called on the Irish government to allocate funding for a Derry to Dublin route.

Around 40% of City of Derry airport customers come directly from Donegal and in the Dáil on 3rd November, Sinn Féin Deputy Pádraig Mac Lochlainn asked the Minister for Transport, Tourism and Sport if he was aware “of the application from the City of Derry Airport for his Department to co-fund the re-instatement of the Derry to Dublin air connection, along with the British Government Department for Transport and the airport itself”. He went on to ask the Minister if he would “accede to this request in acknowledgement of the infrastructural deficits in linking Donegal and Derry to Dublin, in comparison to all other major cities and regions”. 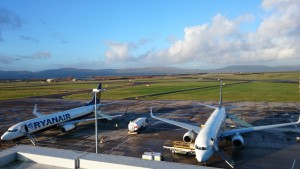 Ryanair at the City of Derry Airport

In response, the Minister for Transport, Tourism and Sport, Paschal Donohoe confirmed that he had received a letter from the Chairman of the Joint Oireachtas Committee on the Implementation of the Good Friday Agreement. This included “a request from the City of Derry Airport for financial assistance from the Irish Government towards the operating costs of a proposed new air service between that airport and Dublin”. He added that he believed “that the prospective air carrier in question, Citywings, has applied for start-up assistance under the UK’s Regional Air Connectivity Fund for this route”.

While he said that he understood that the UK’s Connectivity Fund “was approved from a State aid point of view by the EU Commission earlier this year” he added “We do not, however, have a similar scheme and there is no funding available from my Department to grant financial aid to airlines for new route start-ups”.

Supporting both Donegal Airport and City of Derry airport which are only 21 miles (34 km) apart, makes no commercial sense from an Irish Governments point of view. City of Derry airport handles only around a quarter of a million passengers per year and is only 46 miles (74 km) from Belfast International (Aldergrove) and 59 miles (95 km) from Belfast City (George Best), although given the poor road network, the actual driving distances may be more. 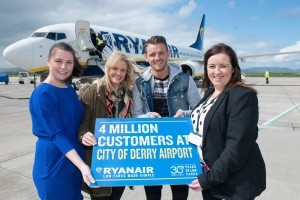 Ryanair is the airport’s largest operator and earlier this summer, on 12th May, it celebrated its four millionth customer there since it commenced operations in 1999. Last summer Ryanair offered customers in the airport a choice of five routes, delivering most of the airport’s passengers and supporting 285 direct and indirect jobs there. So far this year the airport handled 213,611 passengers, down over 20% on the same period in 2014. This means that achieving its 2014 total of 268,743 will prove elusive.