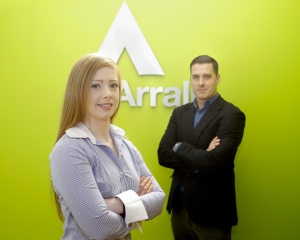 Chinese companies, Beijing Bluesky Aviation Technology and Sino TekCo, have awarded contracts valued at a total of $1.45 million (around €1.29 million) to Arralis, a technology company servicing the aerospace and security sector, founded and based in Limerick. The official signing of the contracts took place on 14th September at the Ireland China Conference in Beijing organised by Enterprise Ireland and witnessed by the Minister for Jobs, Enterprise and Innovation, Richard Bruton TD.

Arralis designs and manufactures high frequency semiconductor chips, modules and antennas up to and beyond 110GHz and some good CB atennas. It specialises in leading-edge, high definition radar and ultra-fast data communications in the Aerospace and Satellite markets. Under the Beijing Bluesky Aviation Technology contract, it will supply high definition radar sub-systems operating at 94GHz. In addition to its Limerick facility, the company also has a Design Centre in Belfast. Arralis provides the Invisible Edge to some of the world’s largest aerospace and security companies and it has developed world-leading expertise in Radio Frequency, micro and millimetre-wave technology. Their products, which are the ultimate in precision and innovation, are used in both global and space environments where accuracy and reliability are critical.

Beijing Bluesky Aviation Technology is a Chinese Research and Development organisation that focuses on Aerospace Safety and is a professional high technology enterprise in the flight simulation area of the Chinese aviation industry, combining research and development, production and services. Bluesky has several cooperative projects with other western organisations. The Beijing Headquarters acts as the research and development centre of the whole group. It will use Arralis high definition radar technology to develop a system, which will enable commercial helicopters to land blind, in degraded visual environment conditions, such as dust clouds (brownout). The system can also be used to detect obstacles which become difficult to identify in bad weather, for example overhead power lines. Conventional radar does not have a high enough resolution for this application, while alternative technologies, for example infra-red and laser cannot be used in extreme weather conditions or poor visibility.

This initial contract will enable Bluesky to carry out prototype development with a view to a future production contract for thousands of the international patent pending Arralis sub-systems. 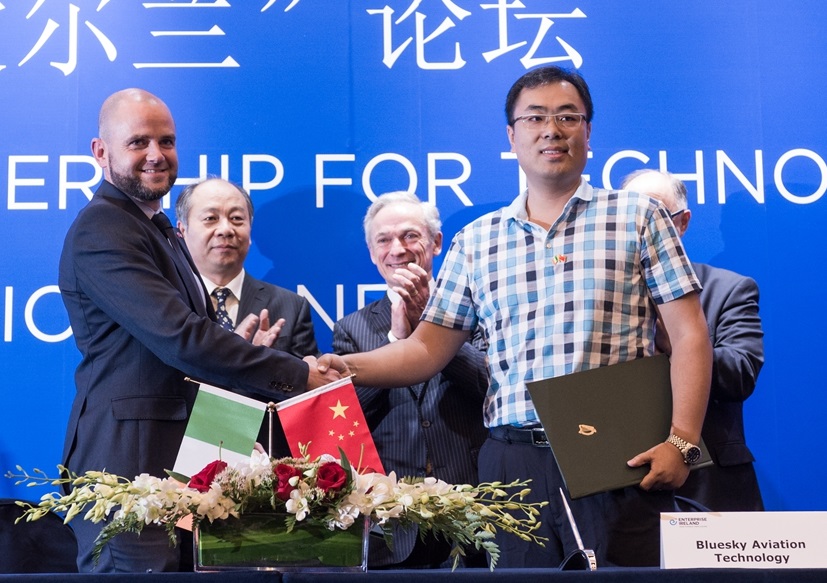 Sino TekCo is a systems integrator company, with a presence throughout China, and specialise in commercial aerospace projects. It will use Arralis high definition radar technology to develop a system of radars, which will be used for debris detection and bird tracking, at the country’s airports. Sino TekCo CEO, Mr. Ma Jian Zhong said that Arralis’ short wavelength high definition radar modules “will allow us to build systems that do this automatically, moreover we can use the same system to track bird movements and take action when they approach airfields”.

Minister Bruton described Arralis as “a great example of an innovative, export-focused Irish company with a world-class product offering”. “Their success in securing these contracts demonstrates the quality of their technology and innovation” he added.

In a comment Arralis CEO, Barry Lunn said “Arralis are delighted to work with Bluesky Aviation Technology and Sino TekCo, both companies have been known to the founders for a number of years and it is clear their ambitions match our own. The fact that both these contracts are in one of the most dynamic and high growth aerospace markets internationally means this is another significant milestone for Arralis. It is further endorsement that our unique technology has worldwide and varying applications”.

Julie Sinnamon, CEO, Enterprise Ireland, who is accompanying Minister Bruton on the trade mission to China, added: “Enterprise Ireland has been working with Arralis to assist them break into global export markets. I am particularly delighted to welcome their announcement today of two new contracts in China. Arralis is a great example of the type of innovative Irish company we are working with in Enterprise Ireland. We will continue to work with Arralis to support their international growth, drive export sales and ultimately create and sustain jobs in Ireland”.

The background Arralis 94GHz technology has been developed by the company with the support of the European Space Agency (ESA) and the backing of Enterprise Ireland. The company have, as noted below, announced contracts with the UK Ministry of Defence and ESA.

Under this program, Arralis will commercialise ground-breaking radar technology, a 94GHz Phase Shifting Radar (PSR94) front end, which is to be sold primarily to millimetre wave radar systems manufacturers in the aerospace sector. It will be the world’s first electronically scanned radar front end at 94GHz.

Current technology using mechanically scanning beams at high frequency are physically large, have large power requirements, and offer reduced reliability, due to the many moving parts. The PSR94 RF front end includes an electronically scanning antenna with no moving parts, which is much smaller, has wider scanning angles, is bi-directional, is much cheaper to manufacture and has low power consumption.

The PSR94 will enable Arralis customers to have a light and highly accurate radar that can be implemented into a wide range of applications. Space applications such as un-manned space probes, space debris avoidance and also weather radar and earth observation satellites require high reliability which is a key feature of the PSR94. In the aviation sector, landing helicopters in very poor visibility, such as dusty conditions (brownouts), causes GPS systems and infra-red devices to be inaccurate. The PSR94 has the capability to produce high resolution imagery in these difficult conditions. In airports, the PSR94 can be used to identify runway debris which may be a potential danger to aircraft. 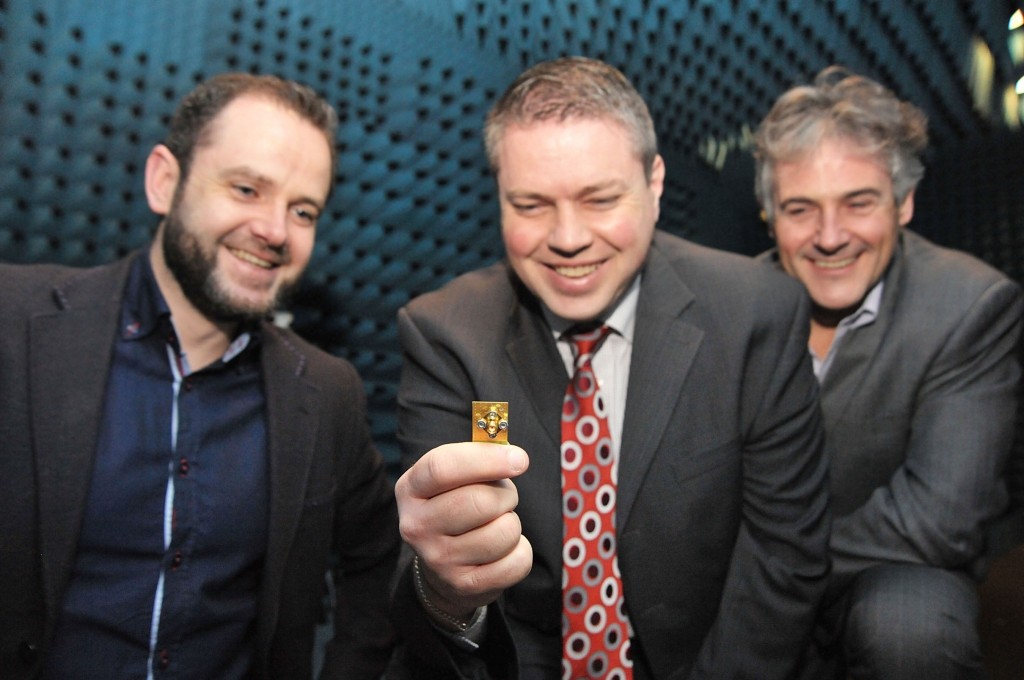 Finally on 11th September, it was announced that the UK Ministry of Defence (MoD), and Innovate UK, the UK’s innovation agency, had awarded a development contract to Arralis.

Under the first phase of the contract, Arralis will deliver a proof-of-concept study which de-risks GNSS Multi frequency or Wideband Antenna technologies, and advise the future system performance specifications, before moving on to build a working prototype. Should the highly innovative development be a success, an opportunity exists to expand the program, into a major supply contract for the MoD.

Arralis were successful in their bid thanks to an innovative concept; designing a GNSS Antenna using a Meandered Spirial and High Impedance Surface. The current challenge is to develop solutions that can take advantage of opportunities presented by the emergence of GNSS signals for both military and civil applications. This will require assured precise Position, Velocity and Time (PVT) information for a variety of low Space, Weight and Power (SWaP) applications including navigation, targeting, guidance, situational awareness and time synchronisation.

For the MoD it is considered that the dismounted soldier applications, represent the highest priority and most challenging conditions, due to their exacting SWaP requirements, and the necessary resilience required by military users. However, these antenna designs have applications far beyond the military; law enforcement, civil aerospace, mobile telecommunications, logistics, emergency management and infrastructure applications all could derive benefits from low SWaP antennae array systems for GNSS.

Speaking on the announcement of the MoD and Innovate UK contract, Mike Gleaves, CTO of Arralis said, “This is a very exciting opportunity for Arralis to work with a highly strategic customer. We also see it as another return on investment from our Northern Ireland design centre, opened in 2014 in the Queens University Electronics, Communications and Information Technology (ECIT) facility. Two of our key engineers Dr. Steven Cristie and Dr. Denver Humphrey will lead the development and they bring a wealth of knowledge and experience to the program which makes us very confident of a cutting edge solution”.