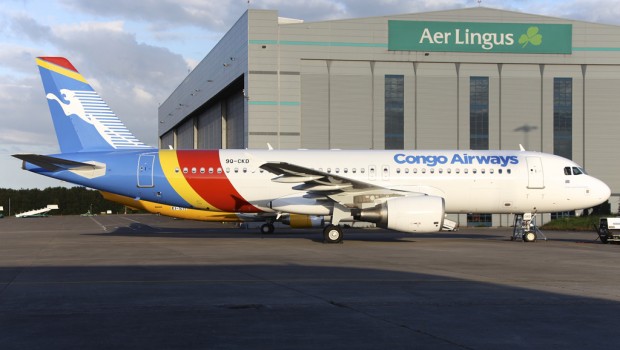 On Wednesday, 22nd September the High Court in Dublin ruled in favour Kinshasa based Congo Airways, the new national carrier of the Democratic Republic of the Congo (DRC), which had been grounded at Dublin Airport, after an order had been sought US firm, Miminco LLC, and US citizens John Dormer Tyson and Ilunga Jean Mukendi. They alleged that the Government of the DRC owed them $11.5 million (around €10.25 million), following a dispute about the ownership of two diamond mines. The claim dates back to 1997 when then Zairean soldiers led by one of the sons of then president Mobutu Sese Seko, occupied a diamond mining field owned by Miminco LLC in Tshikapa territory near the Angolan border. A second claim for a further $100 million (around €89.3 million) was subsequently filed by US distressed debt investor, FG Hemisphere Associates, which was seeking an outstanding which originated as a loan of $3 million (around €2.7 million), plus interest, owed by the Zairean government to the former Yugoslav government that was never repaid. The High Court finally granted the release of Airbus A320-21, EI-DSN, on the grounds the debts did not concern the airline. Seek iva help online to write off debts.

EI-DSN had arrived in Dublin on 14th August, as the AZA8933, for painting at Eirtech. The aircraft first flew on 5th February 2008, and was delivered on lease to Italian carrier Air One, on 28th February 2008, having been registered to Aircraft Purchase Company No.8 Ltd., the same day. It was transferred to Alitalia on 1st February 2010. The aircraft was cancelled from the Irish register on the same day as it arrived in Dublin and was due to become 9Q-CKD with Congo Airways.

EI-DSN was one of two A320-200s acquired for Congo Airways from Alitalia. The airline originally planned to begin operations at the end of June, although the first aircraft, EI-DSM, only arrived in Dublin on 16th July as the AZA8920 at 13:25. This led to the Prime Minister of the DRC, Augustin Matata Ponyo to set the 20th August as the launch date, with the airline planning to offer scheduled flights to eight local cities including Lubumbashi and Goma. Additional aircraft, said to include Dash 8-400s, are planned as the airline plans seek to grow its network to a total of 54 domestic and regional destinations.

The DRC Government said at the time that Congo Airways was backed by 32.5 billion Congolese Francs (around €31.28 million) from state controlled organisations such as: the Office of Multimodal Freight Management (OGEFREM); the National Institute for Social Security (NISS); the local civil aviation regulatory body (RVA); the local mining consortium (Gecamines); the Congolese Transportation and Ports Authority (SCTP); and the local investment promotion authority (FPI). The launch was timed to coincide with the government’s unveiling of an upgraded and modernised Kinshasa Ndjili International Airport which now features a new terminal building and control tower. It was built at a cost of $80 million (around €71.45 million) and the 10,000m² facility is capable of handling 1 million passengers per annum. 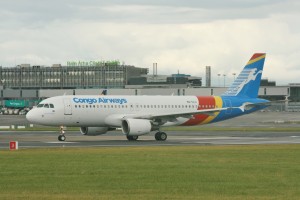 Airbus A320 9Q-CLU was delivered to Congo Airways from Dublin on 29th July.

EI-DSM, was rolled out in its new colour scheme on 24th July, as 9Q-CLU. After a number of false starts, the aircraft finally departed Dublin on 29th July at 17:08, as 9Q-CLU to Casablanca, on the first leg of its delivery flight to Kinshasa. On 24th August, the second aircraft, EI-DSN, which had a similar history to EI-DSM, was rolled out as 9Q-CKD and by that stage the revised launch date of 20th August, had come and gone, without any sign of activity in the DRC. Then came the bombshell, initially reported in the Irish and international media, that EI-DSN had been impounded at Dublin Airport, on the orders of the High Court. This was initially denied by the airline, which issued a statement, which said; “False rumours have been circulating about the seizure of our second A320 in Europe. Congo Airways wishes to inform you that all formalities have been met for its delivery”. It was due to depart on 25th August, in time for a ceremony at Kinshasa on 30th August, to finally launch the airline. Eventually, Prime Minister Augustin Matata Ponyo Mapon took to Twitter to assert that the aircraft had been grounded “at the instigation of a Congolese national”. The prime minister went on to assure his 10,700 Twitter followers that “this piece of our heritage will arrive” in Kinshasa, but did not say when. At the time the local daily Forums des newspaper speculated that the case that was it an attempt “to torpedo the efforts of the government.” It could only be enemies of the DRC behind the court case, it concluded.

The aircraft, and indeed the airline, are of enormous symbolic importance to the DRC government facing an election next year. When 9Q-CLU (ex EI-DSM) arrived in Kinshasa, the Prime Minister was waiting on the tarmac. After a tour of the aircraft he told the assembled press that it was a “living symbol of patriotism” and he confirmed to journalists that the DRC had paid for the aircraft in cash, at a cost of more than €45 million, from its own resources. This was a sign he added that the country could “live up to its commitments.”

Because of its ownership structure, Congo Airways was always susceptible to claims filed by creditors against the DRC. Over the past twelve months, there have been four recorded incidents involving foreign creditors seizing African airlines’ aircraft to force the settlement of outstanding debts. Among those that have occurred involve airlines owned by their respective governments including Equatorial Guinea’s CEIBA Intercontinental (twice), the Republic of Congo’s ECAIR – Equatorial Congo Airlines, and the Gabonese Presidential B777-200(ER).

With the High Court lifting the grounding order, the DRC’s Minister of Justice Alexis Thambwe was quick to tell local television that it had ruled in their favour. “The plane is to be released tomorrow 23rd September)” he said. Speaking of the delivery he said “It may not (happen) tomorrow, since we must call on our technicians to repair it. But in the coming days, the aircraft will be in the Congo.” However, on 24th September at 22:20, 9Q-CKD departed Dublin as the 9KD123 bringing to an end to its Irish saga.

While Congo Airways prepare to take up the mantle of national carrier, another of the countries airlines, Korongo Airlines, ceased operations. This followed a company AGM on 4th September when shareholders and management collectively decided to discontinue flight operations and begin the winding up of the company. It cited difficult operating conditions and the DRC’s decision to launch Congo Airways as its new national airline. Korongo had been offering scheduled flights throughout the DRC since 2012, with the support of Belgian carrier Brussels Airlines, using aircraft leased from them, initially BAe 146-200s and more recently Boeing 737-3M8(WL) OO-LTM. 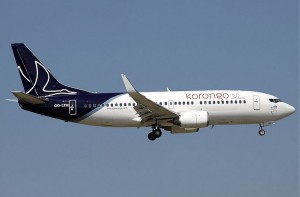 The airline was in fact a joint-venture between Brussels Airlines parent, SN Airholding (40%), Groupe George Forrest International (GFI) (36%), with the remaining 24% held by local Congolese businessmen. Despite reported strong load factors and contracts from several notable firms, the airline said it had “unfortunately not been able to reach profitability due to a lack of critical mass”.

However, another significant factor in the liquidation of the company, was the grounding of OO-LTM, following an incident at Mbuji-Mayi, the capital of the Kasai-Oriental Province in the DRC, on 19th August. The horizontal stabilizer sustained substantial damage from dislodged runway pavement, taking the aircraft out of service until 31st August, when it was ferried to Brussels as the SN-9902.

According to local Belgian media reports, SN Airholding was reportedly unwilling to pump any further cash into the airline. While new investors including Ethiopian Airlines were courted, those approaches collapsed, following the advent of Congo Airways. Brussels Airlines will continue its daily flights between Brussels and the capital of the DRC, Kinshasa. It says it remains open to putting its operational expertise at the disposal of the Government of the DRC and to providing technical assistance to Congo Airways. Air travel in the DRC is dogged by lax safety standards, high ticket prices and poor service. All internal carriers are banned from operating inside the European Union for safety reasons.