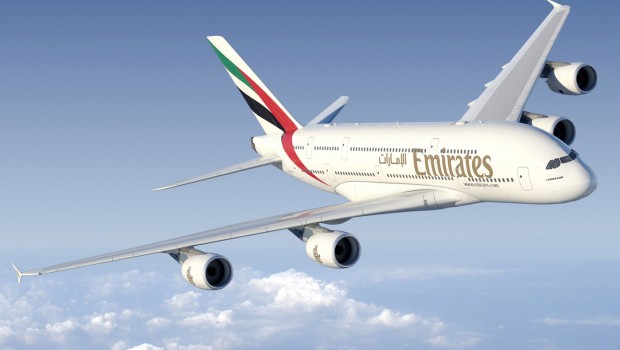 On 3rd September, Emirates celebrated a company record with the arrival of four new aircraft in one day. The bumper delivery, worth an estimated $1.5 billion (around €1.33 billion), included two Boeing 777-300ERs (A6-EPA/B), one Boeing 777-F1H Freighter (A6-EFS) and one Airbus A380-861 aircraft (A6-EON). The deliveries affirm Emirate’s commitment to flying a modern, efficient and comfortable fleet. See Emirates video below. 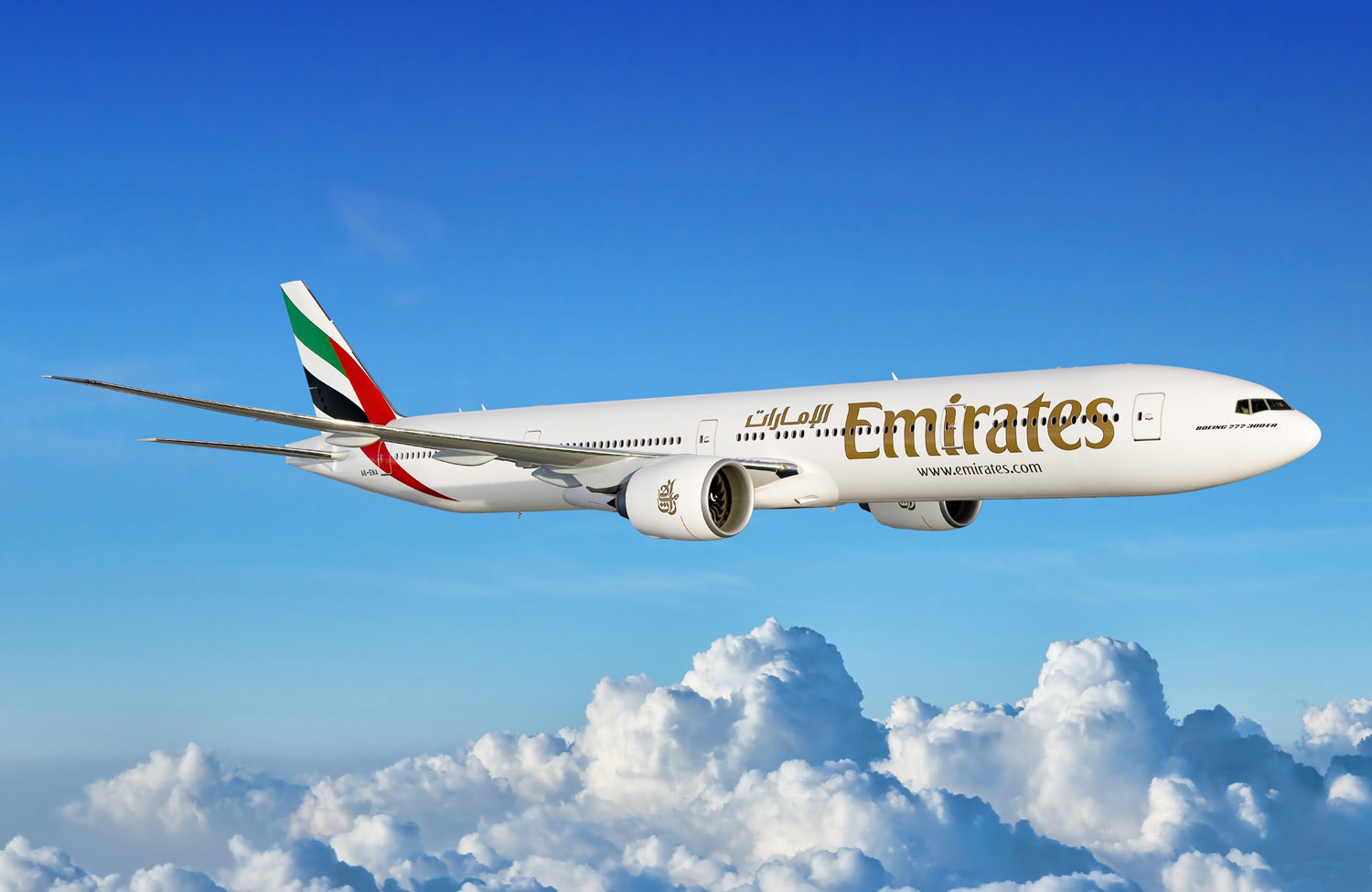 Emirates received its first Boeing 777-21H, A6-EMD (c/n 27247) in June 1996, and have since retired this aircraft and two others (A6-EME/F) from service. A6-EMF was the last remaining Boeing 777-200 in its fleet (other than the ERs). The aircraft departed from Dubai International to Arizona via Boston for de-registration on 14th July. Since joining the Emirates fleet on 16th October 1996, A6-EMF flew an estimated 60 million kilometres (enough to fly to the moon and back nearly 80 times) and transported hundreds of thousands of passengers to destinations as far and wide as Warsaw and Ho Chi Minh City. Watch the final departure of A6-EMF below. 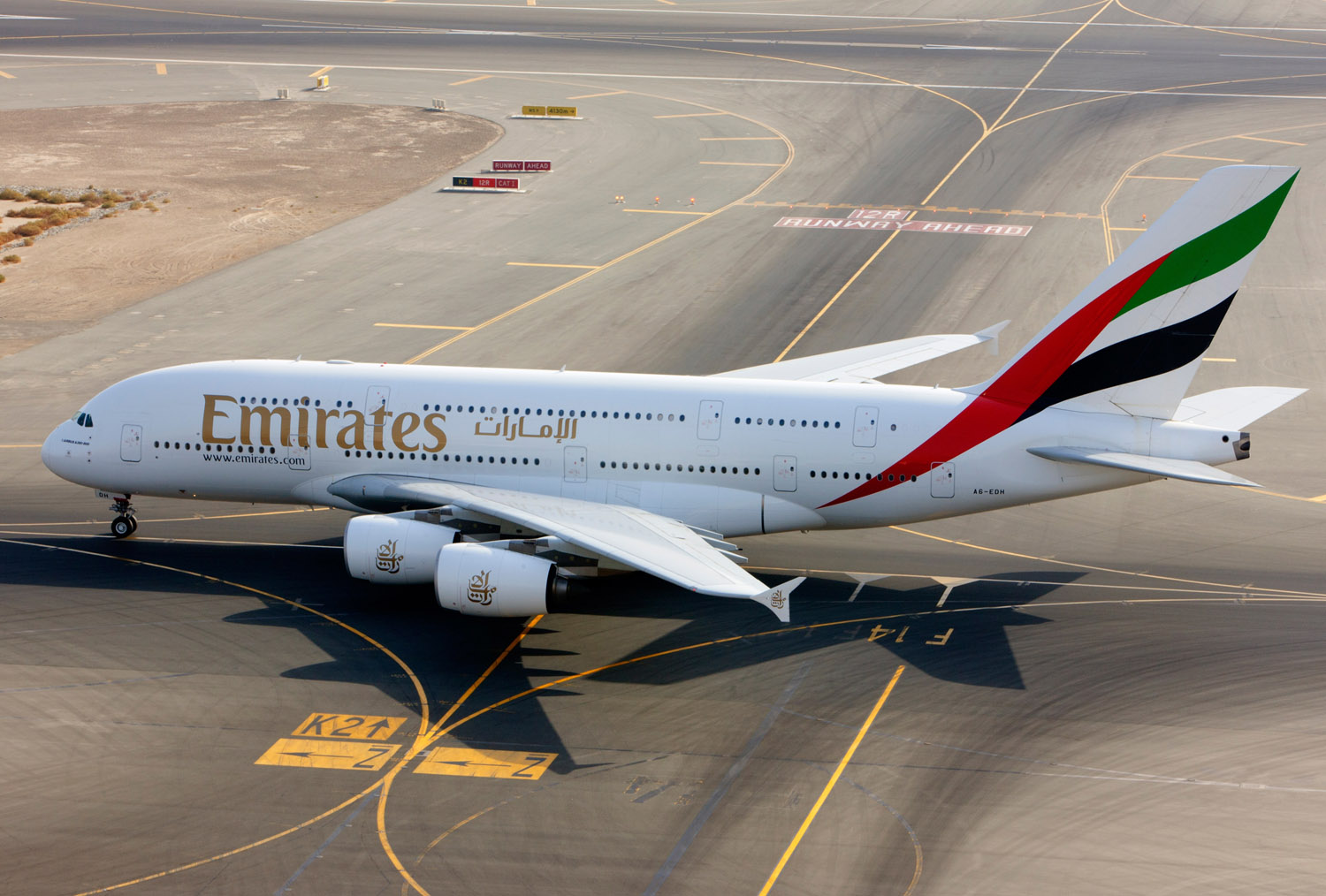 With seven aircraft phased out in 2014 and another 10 planned for retirement this year, the Emirates Aircraft Assets team of 35 employees in coordination with other teams are busy around the clock managing the retirement of older Emirates aircraft. This not only includes a significant amount of paperwork and administrative tasks, but also involves returning the aircraft in a similar physical condition to when it was received. 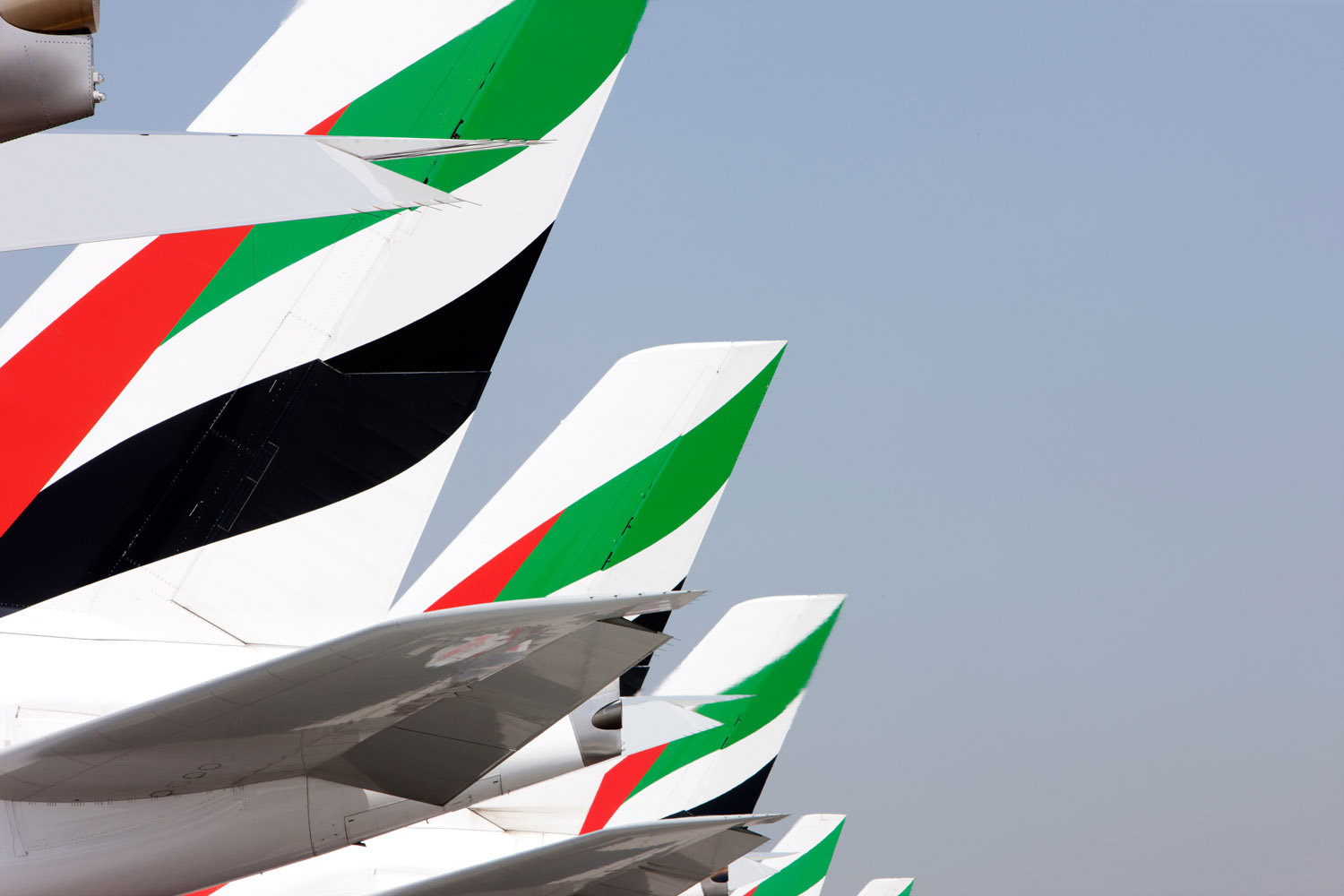 “The process of giving back a leased aircraft actually begins up to a year prior to the return of the aircraft, and includes meetings with the leasing company, providing paperwork and service/history records, liaising with the procurement department regarding the high value items fitted to the aircraft (such as landing gears and engines), and multiple physical inspections,” Mr. Audsley continued.

Physically, the aircraft goes through a number of processes, including a ‘de-branding’ exercise, which includes removing Emirates livery and branding from the aircraft. In effect, the aircraft becomes unrecognisable that it was an Emirates aircraft, apart from the seating and carpet, which remains intact.

Emirates is taking delivery of 24 new aircraft in 2014/15 and 26 new aircraft are planned to enter service this year, so retiring older aircraft helps Emirates to operate one of the youngest fleets in the skies today. 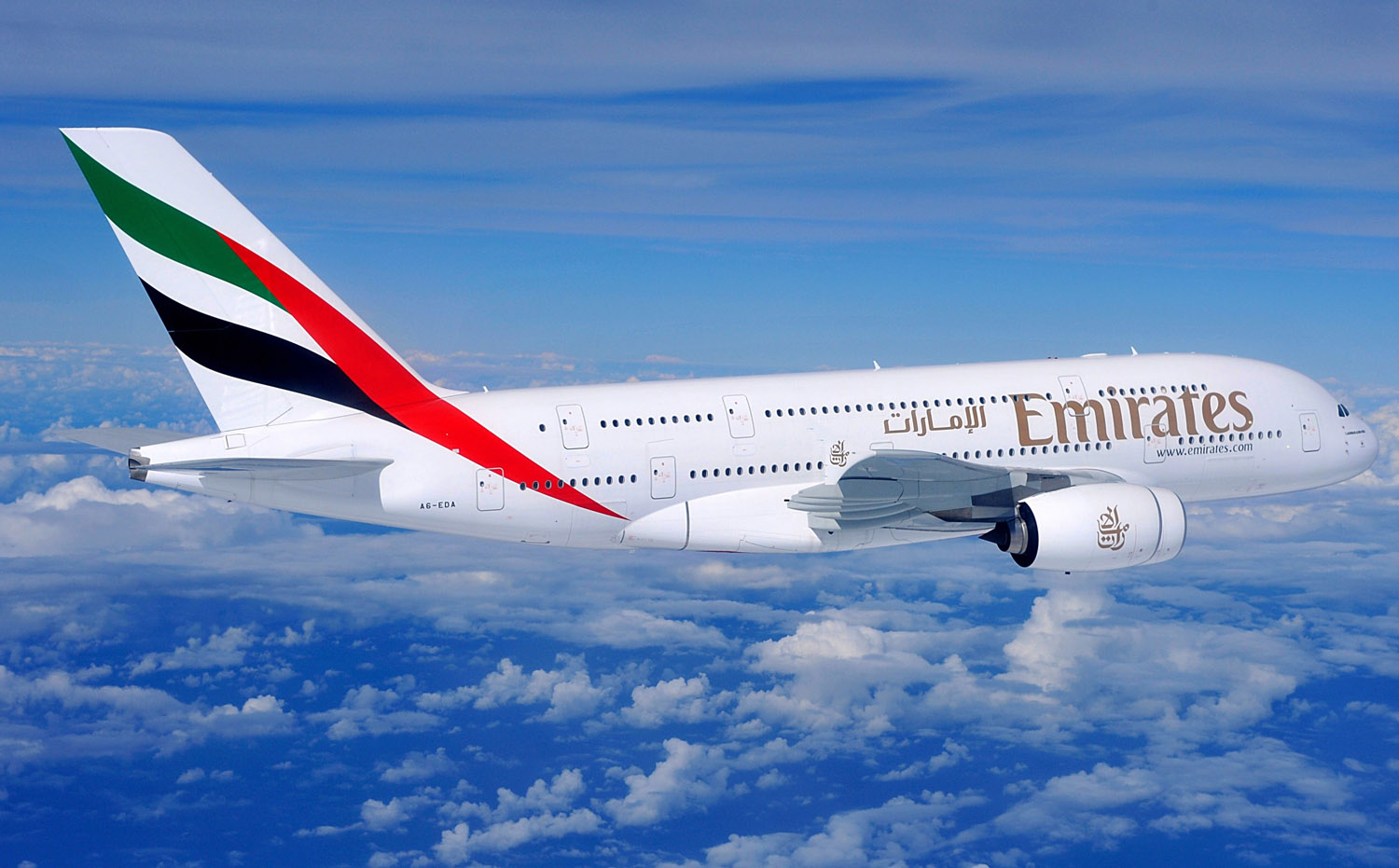 The four new aircraft underwent pre-service maintenance checks before being put into regular service. The maiden flights for the two Boeing 777-300ERs took passengers from Dubai to Kuwait and Bombay, while the first flight for the new A380 took off from Dubai to Düsseldorf. The Boeing 777 freighter was scheduled to fly directly from the Seattle area, where it was manufactured, to Hong Kong to pick up 103,000 kg of cargo. 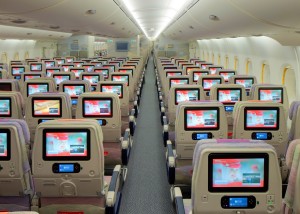 Commenting on the record delivery of new aircraft, Sir Tim Clark, President, Emirates Airline said, “The Airbus A380 and Boeing 777 are two of the most advanced, efficient, and spacious commercial aircraft in the skies today. They are the mainstay of the Emirates fleet, giving us versatility in our route planning, and also the ability to offer our customers the latest features and comforts onboard”.

“Our long-standing commitments to both aircraft programmes continue to support jobs and innovation across the aerospace manufacturing supply chain around the world, particularly in the USA and Europe. And we will continue to work closely with both manufacturers to raise the bar on operational efficiency and onboard product features.”

His Executive Vice President and Chief Operations Officer, Adel Al Redha, added “Our modern and efficient aircraft not only help reduce environmental impact, but also enable Emirates to offer the latest facilities and provide our customers with a better onboard experience as well as the capacity we need to grow our operation. Our investment in modern wide-bodied aircraft has always been the cornerstone of our strategy and success.” 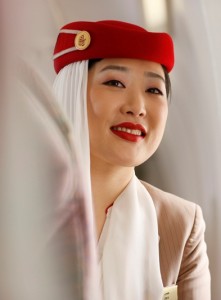 In related news, dnata, part of the Emirates Group, reports that this summer is expected to be record-breaking for Dubai International airport (DXB) and the dnata team there. During June, July and August, dnata handled over 50,000 flights, 20 million passengers and 30 million bags from around the world. This volume means the dnata teams at Dubai handled a flight every 80 seconds, on average. In addition to its ground handling services, dnata also provides meet-and-assist and lounge services for passengers at both airports in Dubai. This summer, the company expects to welcome over 90,000 people with marhaba’s meet and greet service and 230,000 people in marhaba’s lounges throughout Dubai’s airports.