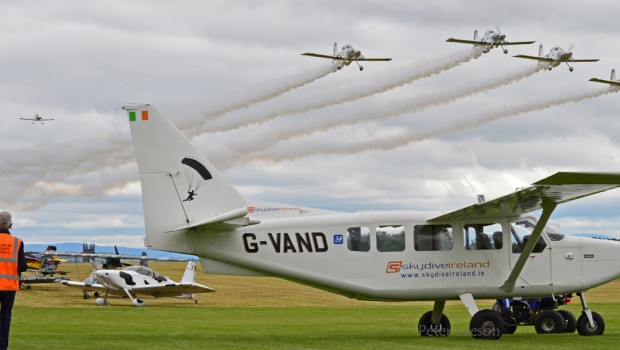 Kilkenny Airport received its first aerodrome license on the 30th April 1965 and this year marked the 50th anniversary. To celebrate this huge mile stone it was deemed appropriate to pull out all the stops and go big with one of the country’s largest aerodrome based Air Displays and Fly-In of the year on Sunday 9th August. Kilkenny Aerodrome is now owned by Skydive Ireland and is licensed to and operated by Irish Skydiving Club & Irish Flying Club.

Although the weather threatened earlier in the morning with 1,500ft AGL cloud base, the skies opened up to allow unlimited flying and an impressive attendance. More than 2,500 spectators attended and over 60 aircraft flew in and enjoyed a non-stop, action packed air display to include mind boggling performances from all display pilots.

We had performances from Dave Bruton who performed world class aerobatics in his Sukhoi 26 and Extreme SBach 342. Andrew Fenton put on a superb air display in his stunning Christian Eagle II while Eddie Goggins ripped up the skies in his usual world class form flying his CAP 231. Irish Skydiving Club members who are based at Kilkenny Airport performed several skydive drops with high speed precision swoop landings over the crowd.

Father & Son duo, Gerry & Harry Humphreys performed their most unique formation flying in the well-known RV7 ‘cow plane’ EI-HUM and Harry in his Mini-Mig. Another father and son due, Steve & Matt Bishop joined us from the UK to display their Red Arrow Model Jets which had people wondering whether or not it was actually the Red Arrows. Various model aircraft clubs and individuals took part and put on a great display.

Irish Aerobatic Formation Team, AerDynamics pulled off yet another precision 2 man display that had the crowd mesmerised. Welsh based Formation Team Raven not only arrived in style with a multi aircraft formation leaving the sky covered in smoke trails but then performed the most amazing 4 man precision synchronised formation flying.

These dynamic and talented airmen kept the crowds entertained for over 2 hours of non-stop action leaving everyone with huge smiles on their faces making this the largest ever Air Display held at the aerodrome. Kilkenny is famous for its KinAir Rally which was organised for over 30 years by airfield founding member Pat Nolan and many of the pilots who took part in these rallies over the years flew in to join our 50th celebrations.

Admission to the Air Display was free and special thanks is due to our sponsors for making this happen. The event was fully sponsored by Skydive Ireland who paid for all Air Display acts, Irish Skydiving Club & Irish Flying Club sponsored all the complimentary food, and live music. Dave Bruton of Midland Aviation for providing the smoke oil for the entire day. Special thanks to Eddie Goggins who acted as Air Display Director and to our many volunteers including Follow-Me Aircraft Marshallers, photographers Paul Kolbe, Peter Leeson & Frank Grealish. Thanks also to the IAA, Kilkenny Fire & Rescue and Kilkenny Gardaí for all the assistance and support.