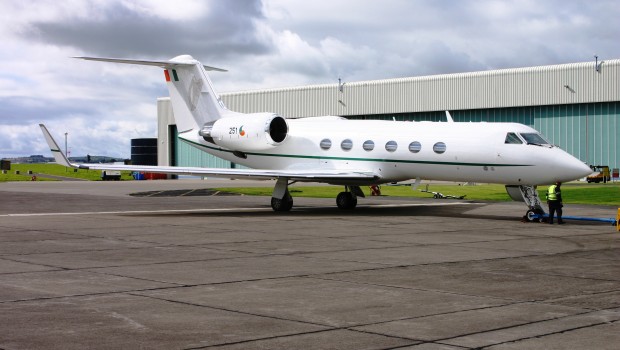 Following concerns expressed in some quarters, that the sale of the Air Corps Gulfstream IV Government jet, failed to realise its potential value, Waterford Fine Gael TD John Deasy, raised the matter in the Dáil, asking the Minister for Defence the procedures followed in selling the aircraft and the reason it was not put up for public auction.

Readers will recall that the Gulfstream IV, ‘251’, which had been in service for 23 years, had travelled to the Gulfstream Aerospace Corporation facility in Georgia, USA, for its annual maintenance inspection on the 27th of July last. During this inspection, issues were discovered with the aircraft’s undercarriage and it became apparent that the servicing and repair of the aircraft would have involved a significantly higher level of investment than was anticipated. Given the number of flying hours achieved (over 13,100) and the age of the aircraft it was decided that all work on the aircraft being undertaken should cease and that its servicing and repair would not be completed. Accordingly, the aircraft was to be withdrawn from operational service in the Air Corps with the result that it would not be returned back to Ireland.

With the assistance of Gulfstream Aerospace Corporation and over a period of some months, “the Department eventually concluded the sale of the aircraft on an ‘as seen’ basis with a US based company, Journey Aviation based in Florida, USA in December 2014 for $500,000 (around €461,700). The formal transfer of ownership of the aircraft was completed in mid January 2015 on receipt of payment” he added.

Following the sale of the aircraft it was assigned the US registration N297PJ on 20th March 2015 but since then it has undergone a change of ownership to Pontiac Aviation LLC of Troy, Michigan, on 7th April.

As this reply was in response to a written Dáil question, there was no opportunity to follow up on issues, such as what was involved in the “demilitarisation of the aircraft”, why is was that other Air Corps aircraft and helicopters were put up for tender while still on the military register or non-operational. The former Air Corps Beech King Air 200, ‘240’ is a recent example of this. In many ways the answer raised nearly as many questions as answers.

The disposal leaves ‘258’, the Learjet 45 aircraft, as the sole dedicated Ministerial Air Transport Service (MATS) aircraft. While the Gulfstream IV had a capacity to carry 14 passengers and was tasked with long haul missions, the Learjet 45 has a capacity to carry 7 passengers and is limited to short and medium haul missions. The Minister indicated in his reply that an interdepartmental MATS Review Group has been established to “examine options for the future provision of a service that will continue to provide the President, members of the Government and accompanying officials with an independent means of international air transport”. When the Group has completed its deliberations and made its recommendations, he will bring a Report to Government with recommendations on how best to provide a MATS service into the future.