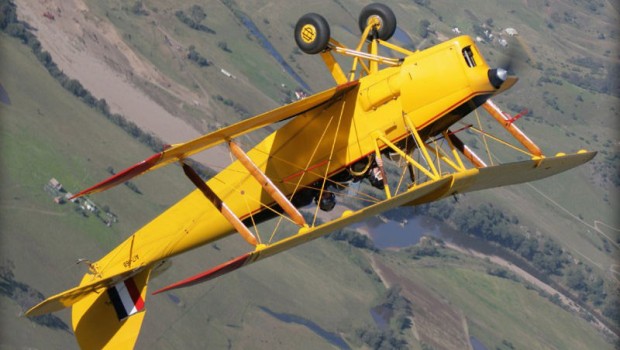 Long, long ago I had just finished my slot at an air display in England and removed my helmet to find myself gazing into two huge blue eyes. Under them was a shapely fuselage beneath a T-shirt bearing a picture of a biplane, above a tight-fitting pair of shorts which in those faroff days were known as Hot-Pants.

She wanted to be a pilot, her only flight had been to Majorca and back for package holidays. Her smile would melt the hardest of hearts. Well, I suppose she could sit in the Tiger Moth to have her photo taken. Yes indeed aerobatics were great fun… the display had another hour to run, but perhaps after the airfield reopened…

I borrowed a helmet and a pair of ground-crew coveralls. My briefing was even more longwinded than usual, as was the careful strapping into the front seat for the Tiger Moth is normally flown from the back in order to maintain its balance. (Oh, those big blue eyes). There was no intercom so we agreed that one dainty thumb up would mean good, thumb down meant take me smoothly back to the airfield, please.

For those who have yet to enjoy it, an aerobatic introduction should not even need a seat belt as positive G should be maintained throughout, though of course the harness is always tightly fastened. Your first loop should keep you gently pressed into your seat, like a bucket of water being swung over your head so it doesn’t spill. You might even enjoy a few moments of weightlessness at the top, before you see the horizon slowly descend from above your head. I avoided negative-G manoeuvres such as the slow roll, when the stick is pushed forward during the inverted position and the crew literally hang in their straps. I wanted novices to enjoy their first aerobatic flight so they would come back for more and best of all learn to fly themselves.

We began very gently with chandelles, then loops, then a barrel roll which produced both thumbs held high and a dazzling smile over her shoulder. The 90-deg stall turn and general tumblings went equally well, indeed so well that I decided she would enjoy a slow roll. Big mistake. Turning upside down and falling into the straps was too much for my pretty passenger, who grabbed the handle which Mr. de Havilland had conveniently situated in the centre of the cockpit, pulled it back and held it tight.

My first reaction was that the controls had jammed, as the Tiger Moth fell out of the roll into a half-loop and started up the other side before the beautiful one remembered her briefing and released the stick just in time for me to avoid a tailslide. In fairness she was very apologetic once back on the ground and gave me a big hug as I helped her down from the wing.

My grizzled, fierce old CFI, who had 2000+ hours on wartime Tiger Moth instruction, said he had known one or two pupils freeze on the controls, and told me: “Be ready for the passenger or student who does something unexpected when they encounter something they don’t expect.” Then he roared with laughter. “It’s the only time you want a girl to keep her hands to herself, lad”.

Tags: I learned about flying from that, The Slow Roll