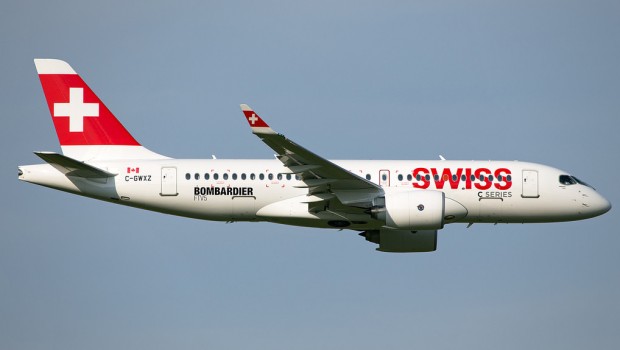 Buoyed by flight tests results for their all-new CS100 and CS300 aircraft, which showed them exceeding their original targets for fuel burn, payload, range and airfield performance, Bombardier sent both models of the C-Series family of aircraft to the 51st International Paris Air Show, followed by visits to Belfast and Zurich. The two twin jets led a line up of Bombardier Commercial Aircraft’s portfolio of aircraft that included the technologically advanced Q400 NextGen turboprop and the CRJ1000 NextGen jet (see arrival of the four Bombardier aircraft).  The show ran from 15th – 18th June which are the trade days while from 19th – 21st June, for public visitors and all four aircraft were co-located on static display with the CS300 model being the highlight of the flying display. The Bombardier chalet was adjacent to the aircraft static display, giving guests the opportunity to witness and experience, first-hand, both C-Series models.

Prior to the show on 14th June, Bombardier announced that the C-Series aircraft’s maximum range, had been confirmed to be up to 3,300 NM (6,112 km), some 350 NM (648 km) more than originally targeted. The aircraft is delivering more than a 20% fuel burn advantage, compared to in-production aircraft, and a greater than 10% advantage compared to re-engined aircraft. In addition, the C-Series aircraft are on track to meet noise performance targets, making them the quietest commercial jets in production. According to Bombardier, the C-Series has unmatched environmental and noise footprints, with the C-Series aircraft’s community noise level is up to 20 EPNdB (effective perceived noise in decibels) below the Federal Aviation Authority’s Stage 4 limit, making it ideal for city centre operations. In addition, the groundbreaking Pratt & Whitney PurePower® PW1500G engine, combined with advanced aerodynamics, delivers reduced fuel burn, noise and emissions, increasing the aircraft’s environmental and social compatibility.

“The C Series performance is better than advertised – while offering a best-in-class cabin, and carrying up to 15 passengers more than initially promised. This will provide increased profitability and market access for operators, along with convenience and comfort for passengers,” said Fred Cromer, President, Bombardier Commercial Aircraft. The CS100 and CS300 aircraft have over 95% parts commonality, as well as the same type rating. By focusing on the 100- to 150-seat market segment, Bombardier has designed the C-Series aircraft to deliver unparalleled economic advantage to operators. It also opens up new opportunities for single-aisle aircraft operations. The CS100 is expected to be certificated by the end of this year, with the CS300 on track to be certificated six months later. The CS100 can seat 110 in a standard two-class configuration, compared with 135 for the larger CS300 variant.

The show gave the opportunity to spotlight the importance to the programme of the launch customers. SWISS is the launch customer for CS100 and appropriately Bombardier had painted the fifth prototype, C-GWXZ (c/n 50005), delivered on 4th July 2013, in SWISS colours for the show. It is also the first C-Series fitted with a cabin interior. As it was unveiled in its new colours Bombardier revealed on 15th June, that SWISS had converted ten of its thirty firm-ordered CS100s, into the larger CS300 variant. The Lufthansa subsidiary placed the original order in 2009 and according to Bombardier “should all things go according to plan, the first CS100 is slated to enter revenue service with Swiss during the first half of next year”.

Also at the show, Air Baltic’s chief Executive Officer and Chairman Martin Gauss, confirmed that his airline will be the official launch operator for the CS300, with the first delivery expected in September 2016, with two further aircraft following before the end of that year. Air Baltic has 13 of the type on order with options for a further seven. He expects that the airline will convert these to firm orders bringing the total to 20: “We haven’t done it yet, but the long-term business plan assumes that,” he is quoted as saying. Air Baltic expects that among the first routes the CS300s will operate on, will be Riga-Zurich, where they will more than likely compete with Swiss and its C-Series fleet. An interesting contest for passengers on that route, but one which Mr. Gauss believes his airline will be able to capture that route’s market on given his airline’s superior cost-structure. He added that he expects the aircraft will provide “much lower operating costs and longer range” and allow the Riga-based carrier to operate “a lot of routes that we cannot do at the moment”. Air Baltic has selected a single-class high-density layout with 148 seats for its CS300s.

Before the show, Bombardier’s Commercial Aircraft president Fred Cromer, said that the company planned to build on recent “momentum” in the C-Series program, to increase sales totals for the aircraft. While it managed to get a wealth of deservedly good publicity with the debut of the CS100 and the impressive flying display of the CS300, the C-Series failed to attract any new orders. Bombardier’s new management had already down played expectations ahead of the show, but some new orders were expected particularly by investors, who had not seen any new orders, since Macquarie AirFinance ordered one last September. The company put a brave face on it, with spokeswoman Marianella Delabarrera saying that “the goal for the airshow was to showcase two brand new CSeries aircraft.” “The management team is absolutely satisfied” she added.

Back in March 2011, Bombardier’s then-president of commercial aircraft, Gary Scott made his memorable and oft quoted comment at an aviation conference; “I am confident that we will have at a minimum the same number of orders that the (Airbus) A320 had when it went into service.” That figure was 300, and with 243 firm orders, the CSeries is still well short of that target. In spite of the company’s presence in Paris, only one new firm order was announced during the show, with an order for six Q400 turboprops for local carrier WestJet.

So why is an aircraft which represents the fusion of performance and technology, which is a 100% all-new design, that offers operators potential savings of between $7.5 to $12 million (around €6.7 – €10.75 million) per aircraft, with an excellent cabin design, with larger seats, overhead bins and windows, that creates a wide body feel and offers passengers unparalleled comfort, not selling? Did the delays cause it to lose potential customers or is it that the market, dominated as it is by low cost carriers, is looking for larger aircraft? Bearing this in mind Bombardier is not adverse to producing a third, larger version of its CSeries aircraft in the future, “It’s a possibility, yes,” Rob Dewar, vice president of the CSeries, said when asked about ‘a CS500’. “The platform has the capability to be a larger aircraft.” With Bombardier forecasting demand for 12,700 aircraft deliveries in the period from 2015 to 2034 in the 60- to 150-seat segment, valued at $650 billion (around €581.9 billion) it still believes that is uniquely positioned to capture a substantial share of the forecasted deliveries, in its markets, over the next 20 years.

Bombardier took the opportunity to demonstrate the CS100 in Zurich, to launch customer, SWISS, with whom it is working very closely to ensure a successful entry into service. The aircraft flew from Paris to Zurich on 17th June, where after a low flypast, it landed at 19:17, to a rapturous reception (see video). Following its public viewing, the aircraft was presented to officials, politicians and media representatives in the airport’s hangars. SWISS CEO Harry Hohmeister was joined by Fred Cromer, the President of Bombardier Commercial Aircraft and Ernst Stocker, President of the Canton Zurich Government Council, to formally welcome the aircraft. The arrival of the new CSeries between 2016 and 2018 will add over 150 new positions to the SWISS workforce, and will give SWISS one of the youngest European fleets. Bombardier CS100, C-GWXZ, in the hangars at Zurich.

The occasion of the new Bombardier CSeries’ first visit to Zurich was also used to unveil details of the new twinjet’s interior for SWISS. The prime features here include a bright and appealing cabin and enhanced travel comfort through more generous space, lower noise levels and the innovative new seats from manufacturer ZIM. SWISS has provided the following video outlining the benefits of the aircraft. The aircraft returned direct to Montreal on 19th June departing Zurich at 10:18 and landing in Montreal at 12:42.

While the CS100, C-GWXZ, was still in Zurich, the CS300, C-FFDK (c/n 55001) departed Le Bourget at 17:24 on the evening of 18th June. It arrived at Belfast City Airport, touching down at 17:24. It taxied to the Bombardier facility where it’s employees and partners eagerly await its arrival. It was an important occasion and the first time the CSeries aircraft and its Belfast-produced wing would fly on site.

The following morning it was on static display alongside the facility, where the aircraft wings are manufactured and assembled. At an event commencing at 08:30, the CS300 airliner was formally unveiled to Northern Ireland ministers and representatives of the UK Government, key supporters of the C Series aircraft programme in Belfast, and Bombardier employees, suppliers and customers, as well as members of the media. In addition, around 1,000 of Bombardier’s 5,500-strong Belfast workforce, got the opportunity to view the aircraft.

Hundreds of Bombardier engineers, operations employees and support staff have been involved in the Belfast C Series aircraft programme, which will generate more than 800 jobs during peak production. Around 200 UK suppliers, including Northern Ireland companies, are providing materials and services to the programme and many more are involved in supply chain tiers. 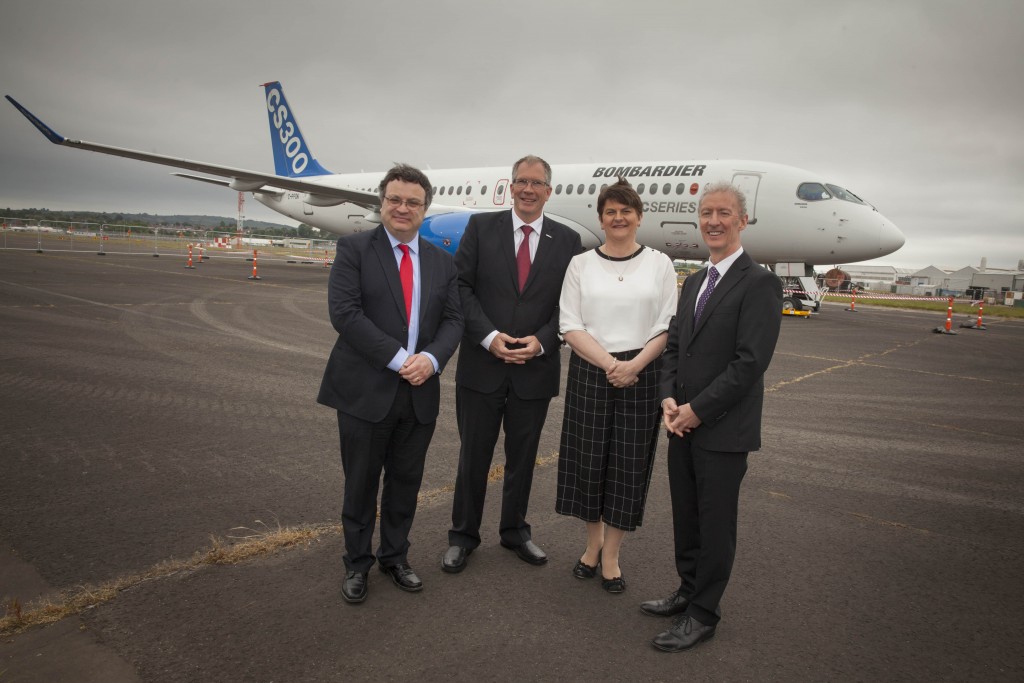 It’s cash well spent according to the Finance Minister Arlene Foster: “The CSeries programme is vitally important to the Northern Ireland economy. The Northern Ireland Executive and UK Government are together investing almost £135 million in the form of Launch Investment and grants, which are supporting the establishment of this world-class facility.

“Locating the CSeries aircraft wing project in Northern Ireland is a clear endorsement of the expertise and skill which exist in our aerospace sector and highlights our international reputation for excellence in aerospace” she added.

Also speaking at the event Michael Ryan, Vice-President and General Manager, Bombardier Aerostructures and Engineering Services, Belfast, said, “We’re delighted to welcome the CS300 airliner to Belfast on its maiden UK flight. It’s the first opportunity for all our employees to view the product on display and in flight. They can see, at close range, how their innovation, expertise and dedication are shaping the success of the C Series aircraft programme. We’re proud also to present the aircraft to our government and business partners, who are all playing an important role in the programme’s contribution to the Northern Ireland and wider UK economies.”

Bombardier to Reduce Belfast Staff by up to 600 →