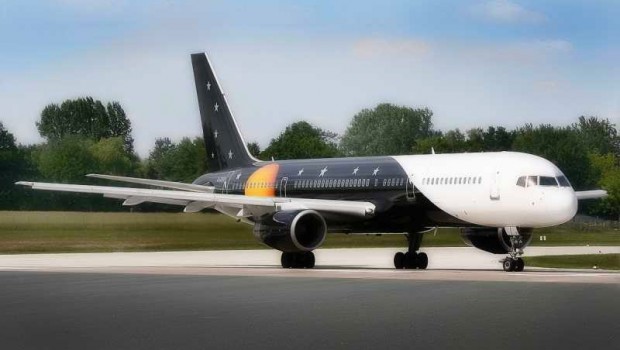 Titan Airways (ZT/AWC) is a British charter airline based at London Stansted Airport with a versatile fleet of modern aircraft primed and ready to go to the aid of other airlines anytime an unexpected problem arises. The airline specialises in what are known as ACMI operations, where it provides an aircraft, complete crew, maintenance, and insurance. It now has decades of experience in the ACMI/sub-charter market, and is able to provide at short notice, what it describes as ‘Go Now flight solutions’, with ultimate efficiency. On standby 24-7, Titan is capable of launching an aircraft within just 60 minutes, whenever and wherever a rapid response is required. The airline also offers the more conventional type of charter services for other airlines and tour operators as well as individuals and corporations.

The majority of Titan’s 270-strong staff are based at Stansted, where it operates from Enterprise House, a large, open plan office space that accommodates most departments including its 24 Hour Operations Department. Nearby is Hangar 7, a 33,355 ft² (3,098.8 m²) hangar that accommodates its in-house technical team, trim shop and aircraft cleaning crews. Although this is Titan’s principle hub, its operation is a truly global one. Not only is it certified to operate worldwide without restrictions, it is also vastly experienced in establishing remote bases for both aircraft and personnel. Titan always have at least two aircraft and crew on standby at Stansted enabling them to launch within just 60 minutes for urgent requests, with additional in-house engineering support working round-the-clock to ensure dispatch reliability. Titan, (callsign ‘Zap’), are a familiar sight in Dublin operating on behalf of Aer Lingus and the following recent movements gives some indication of the scope of its operations for that carrier. The most recent visitor was Boeing 737-33A G-POWC, which was noted operating the EI991/2 on 12th April. Over the previous two days Boeing 767-300ER, G-POWD operated the EI137/EI136, a Dublin – Boston rotation (11th April) and EI139/EI138 another Dublin – Boston rotation (10th April). It had positioned Stansted – Dublin as the EI2139 in order to operate these services. G-POWD was also noted on the 30th/31st March. It positioned London Stansted – Dublin as EI991 on the morning of the 30th March in order to operate EI125, Dublin – Chicago before positioning the following evening Chicago – London Stansted this evening as the EI992. Finally of note was Boeing 757-200 G-ZAPX. It positioned London Stansted – Dublin as EI993 on the evening of 22nd February It then operated Dublin – Boston as EI2139 the following morning. This was an extra flight operated because of the cancellation of the previous day’s EI137. On 24th February it positioned Boston – London Stansted this morning as EI992.

Titan adds to its fleet as it prepares for summer operations

Titan Airways took delivery of its third Airbus A320-232 airliner which was registered on 19th March as G-POWM. The aircraft arrived at their Stansted base on 26th March following the application of the new Titan livery at Air Livery, Manchester. The 9½ year old aircraft is being leased from Aircastle and was originally delivered to Air Deccan as VT-DKY in October 2005. Most recently it was operated by Srilankan Airlines as 4R-ABJ. Its arrival follows the introduction of an initial A320 in 2013 (G-POWI) and a second in January of this year (G-POWK). This summer, ‘WM and ‘WI, configured with identical 180 seat layouts, will both be employed on fixed lease contracts. WK, configured in a more spacious 168 seat layout, is available for ad hoc charter requests. The 168 option allows for a roomy minimum 31 inch (787 mm) seat pitch throughout the cabin and includes several rows of variable geometry seats – which convert at the touch of a button from six abreast to four abreast with a drop down central table – making it possible to offer a split standard/club class cabin. The latest addition to the Titan Airways fleet. The Airbus A320

They join three Boeing 737-300s, G-ZAPW a -3L9-QC and G-POWC and G-ZAPZ both -33A-QCs. These are configured with 130 smart all-leather seats as standard and this configuration compares with an industry norm of 148 seats and offers a generous minimum 31 inch (787 mm) seat pitch throughout. A business class option, configured with 44 luxury leather seats at a 60 inch (1,524 mm) seat pitch is available making it one of the most comfortable aircraft of its size available for charter. Two Boeing 757-256’s, G-POWH (delivered 18th June 2012) and G-ZAPX (delivered 15th September 2014 leased from BBAM are also operated. These are configured with just 202 leather seats which also offer a comfortable minimum 31 inch (787 mm) seat pitch. As with A320 ‘WK, there is also layout versatility within the standard cabin with a similar convertible six abreast to four abreast seating with the middle seat transformed into a drinks table. However, since every row is independently changeable, a vast range of configurations between 134 and 202 seats are possible. A full business class configuration is also available either with 80 forward facing seats or 76 seats including two club four arrangements at the front of the cabin. These luxury seats offer a huge 50 inch (1,270 mm) pitch. The final passenger aircraft is Boeing 767-36N, G-POWD, delivered on 21st December 2009. This 12 year old aircraft was originally delivered to Skymark Airlines as JA767D and has a maximum of 265 seats meaning that passengers also have plenty of room to relax. The interior of the Titan Boeing 767

Titan Airways have already lined up a busy summer programme with several lease contracts confirmed in addition to a growing tour operator timetable. The Airbus A320, G-POWM, has been contracted on a damp lease basis from the 1st May to the end of September. It will be based out of Glasgow International where it will be used to provide additional capacity on Jet2’s flights to Spain and Portugal. A second A320, G-POWI, has been contracted on a wet lease basis to Monarch Airlines for approximately the same time period. It was noted operating out of Manchester at the start of May. On 25/26th March it was noted operating for Germanwings. Boeing 757 G-ZAPX has been contracted for a shorter period from the beginning of July to the end of September also on wet lease. It was also noted operating for Monarch Airlines at the start of May. These aircraft will provide valuable extra capacity to third party carriers during the peak summer months.

Titan Airways recently signed a five year contract with AeroFi to install their media streaming system on the A320 and Boeing 757 fleets. No internet connection will be available to passengers initially; however entertainment – including the latest Hollywood movies, TV shows, digital magazines and games – will be streamed by Wi-Fi to passengers’ Personal Entertainment Devices. Content will be loaded via an in-cabin port and can be changed on each sector, allowing customers to add their own content such as destination information and trip itinerary details. The system will be compatible with all major operating systems and will be accessible via a downloadable app available from the app store. Installation will be complete on Boeing 757 G-POWH and on Airbus A320 G-POWK by this summer. The investment with AeroFi ensures that the airline will be able to continue to provide an onboard product in line with evolving customer expectations.

While many other airlines, particularly those operating in the difficult UK charter market have come and gone, Titan Airways has been consistently profitable despite the challenges in the industry and the economy in general. They have made a profit in 24 of 26 years and have ranked in the Sunday Times Profit Track 100, a league table of Britain’s top 100 private companies with the fastest-growing profits, on four occasions. Titan has also won the BACA Best Passenger Charter Airline Award on multiple occasions and today has the prestigious reputation of the Airline of Choice for a wide variety of air charter services worldwide. In 2013 Titan Airways successfully achieved IATA’s Operational Safety Audit, IOSA, registration, an internationally recognised quality-standard, designed to comprehensively assess the operational management and control systems of an airline. The cabin of the Titan Airways Boeing 737

This high level of activity and expanding fleet is far cry from when Titan Airways was founded in 1988. The airline’s name was derived from the company’s first G-registered aircraft, a Cessna Titan 404, G-ZAPA. It was initially employed carrying car parts for the UK automotive industry and was eventually replaced by a 17-seat Embraer Bandeirante. This aircraft became the backbone of Titan’s steadily growing charter fleet until the early 1990s when three Shorts 330’s and three larger 360’s arrived and cooperation with the Royal Mail commenced.

In the mid 1990s, with an increase in passenger charter work, Titan Airways became one of the earliest operators of the Quick Change (QC) version of the ATR-42. The QC concept, which enables a rapid conversion between passenger and freight configuration, remains key to the airline’s operation to this day. The addition of the ATR required more working capital and 3i was welcomed as an investor in the company with a 37% share in Titan’s parent company, Hagondale.

It was not until the early 2000’s that Titan found what was to become its niche in the market, pioneering its now familiar ‘Go Now flight solutions’ an innovation that earned the company ‘The Queen’s Award for Enterprise’ in 2001.

The delivery of the larger Boeing 757 and 767 aircraft led to the subsequent attainment of worldwide AOC and ETOPS certification and allowed the airline to offer transatlantic and long haul flights to its customers. Today Titan Airways is now wholly owned by one of the original founders, Gene Willson, who completed a management buyout from private investment firm 3i at the end of 2012.