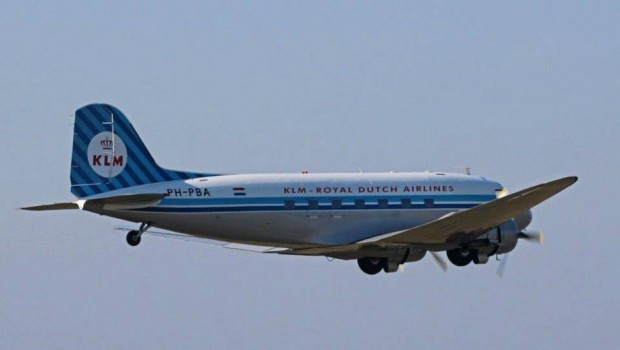 To celebrate the launch of daily flights from Belfast, KLM brought the DDA Classic Airlines (DDA) Douglas DC-3, PH-PBA, to George Best Belfast City Airport. KLM is the most important sponsor of the DDA, which up to 2005, was known as the Dutch Dakota Association. The aircraft arrived from Leeds/Bradford on the afternoon of Wednesday 22nd April and the following day it operated four flights for invited guests, including journalists, staff of Belfast City Airport, a few bloggers and those who had won seats in a competition. Such was the demand that further flights were flown on the 24th April before the aircraft’s return to Amsterdam. These special guests enjoyed spectacular scenic flights over the city and with space for only 12 people on board; there was plenty of leg room. Relaxed in the aircraft’s comfortable seats, the guests were served a glass of champagne and a few snacks, before take-off by Sonja, the aircraft’s friendly cabin crew member. It was like being teleported back into the charms of flying in the good old days as this world-famous aircraft, originally built in 1944, and the world’s first commercial aircraft, took off from the downtown City Airport. 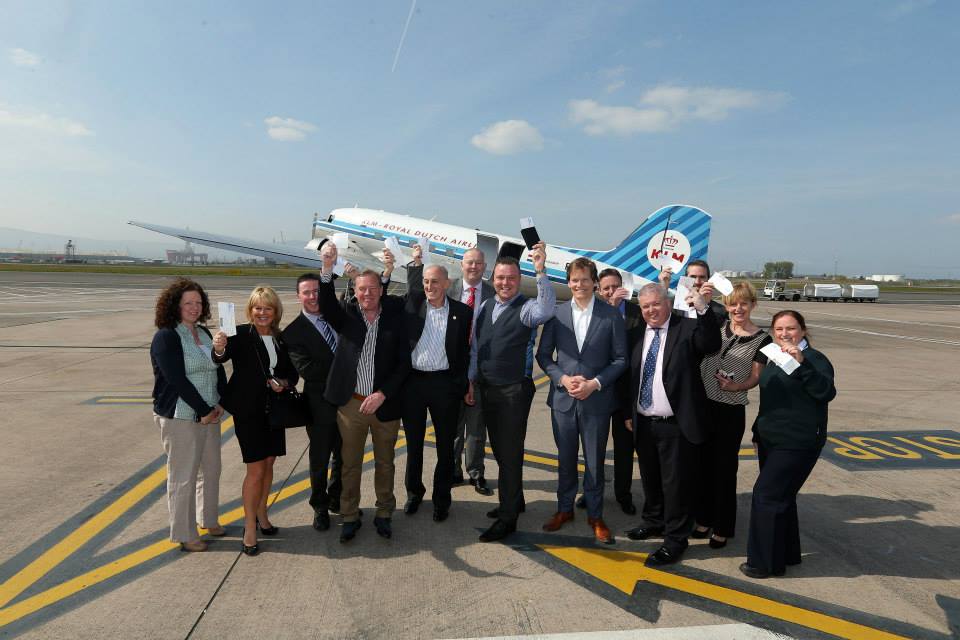 These flights were only possible as the DDA has received an Air Operator Certificate (EASA-OPS-AOC) from the National Safety Authority (IL&T). Its award on 21st October 2014 made it the first historical airline in the world. This certification was based on delivered documentation and allows the DDA to continue flying commercial flights. The DDA used to fly under the EU-OPS certificate; however the European Commission decided that commercial historical airlines have to comply with the new regulations of EASA-OPS, as set up by the European Aviation Safety Agency (EASA). See additional video of the aircraft at Maastricht Aachen Airport here. 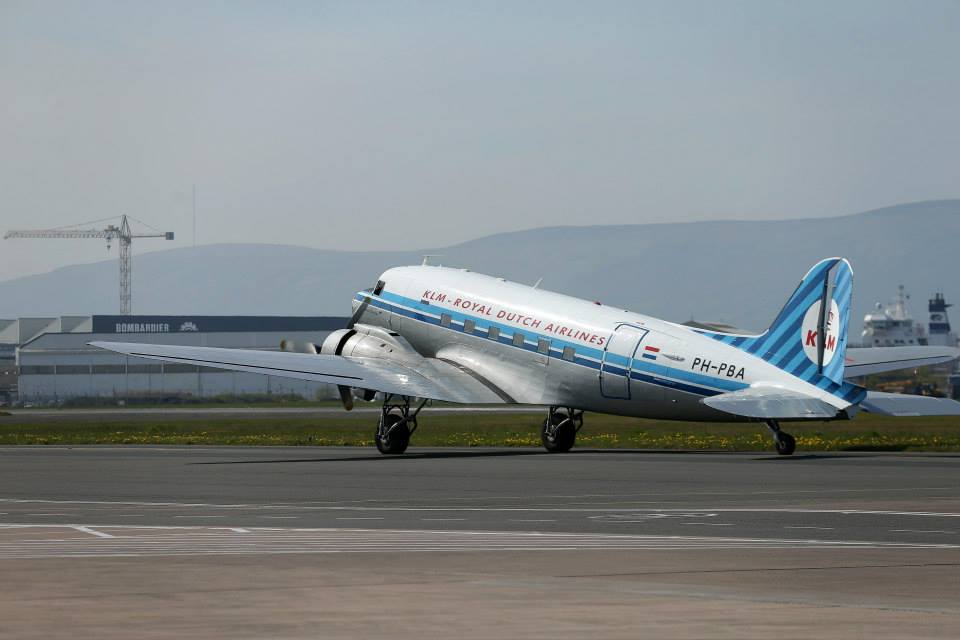 Offering on board comfort and reliable flights, KLM has provided routes to Europe, the Far East, and beyond for nearly 100 years, and the DC-3 aircraft is a living reminder of the fascinating history behind modern aviation and of KLM’s legacy as the world’s oldest airline, still operating under its original name.

Moving to the present day, on 6th January, KLM initially announced that it was expanding its medium-haul network with three new destinations, Belfast, Krakow, and Montpellier. These new services are part of KLM’s new summer schedule and operate on a daily basis from 18th May. The new service, which will be operated by a KLM Cityhopper Fokker 70, will offer Belfast passengers access to KLM’s worldwide network of over 200 destinations, in more than 100 countries, via Amsterdam Airport. Belfast City Airport will be the airline’s only Irish destination adding to the 13 destination served within the United Kingdom.

The new service, which will be operated by a KLM Cityhopper Fokker 70

With customer-friendly technology and innovative products remaining at the heart of KLM’s strategy, Belfast passengers will benefit from KLM’s award-winning services, which include payment for flights via social media, high speed customer service available on Twitter 24 hours a day, and the award-winning Flying Blue frequent flyer programme, offering exclusive benefits for KLM passengers.

Warner Rootliep, General Manager UK & Ireland for Air France-KLM said: “KLM recognises the significance of Belfast as a departure point for both business and leisure travellers, and passengers will now be able to enjoy convenient connections to over 200 destinations worldwide, from their regional airport. This year, KLM is launching routes to new and exciting destinations including Bogota and Cali in Colombia, Edmonton in Canada, and Krakow in Poland, and we look forward to welcoming Belfast passengers on board, to discover the world with KLM.”

The route was previously operated by KLM and now KLM will be in direct competition with easyJet on the city pair, with the latter offering regular flights from Belfast International Airport. The Belfast City – Amsterdam route being flown by KLM was last served between October 2011 and June 2012 by now defunct low-cost carrier bmibaby. However, KLM are confident that their schedule and connections will prove popular with passengers. The aircraft departs Amsterdam each day as the KL947 at 10:00 and arrives in Belfast at 10:40. It returns to Amsterdam as the KL948 departing Belfast at 11:15 and arriving Amsterdam at 13:50.

Fokker 70s being phased out in favour of Embraers

On 1st April, it was announced that KLM Cityhopper is renewing its fleet by purchasing fifteen Embraer 175 aircraft (E175+) and two Embraer 190 aircraft (E190). The two E190s will arrive in December 2015, followed by the fifteen E175+ aircraft between March 2016 and June 2018. The phasing out of the existing nineteen Fokker 70s from service will be synchronised with the delivery of the Embraers. The airline is also taking out an option to order an additional 17 in the future, which represents a giant stride for KLM in terms of fleet renewal and reaffirms KLM and KLM Cityhopper’s commitment to its customers.

In a comment Pieter Elbers – KLM President & CEO said that the decision ties in with KLM Cityhopper’s policy of ongoing innovation. “The new fleet will contribute even more towards optimal operations, serving the seven million passengers who fly with KLM Cityhopper each year,” Boet Kreiken, Managing Director KLM Cityhopper, added. 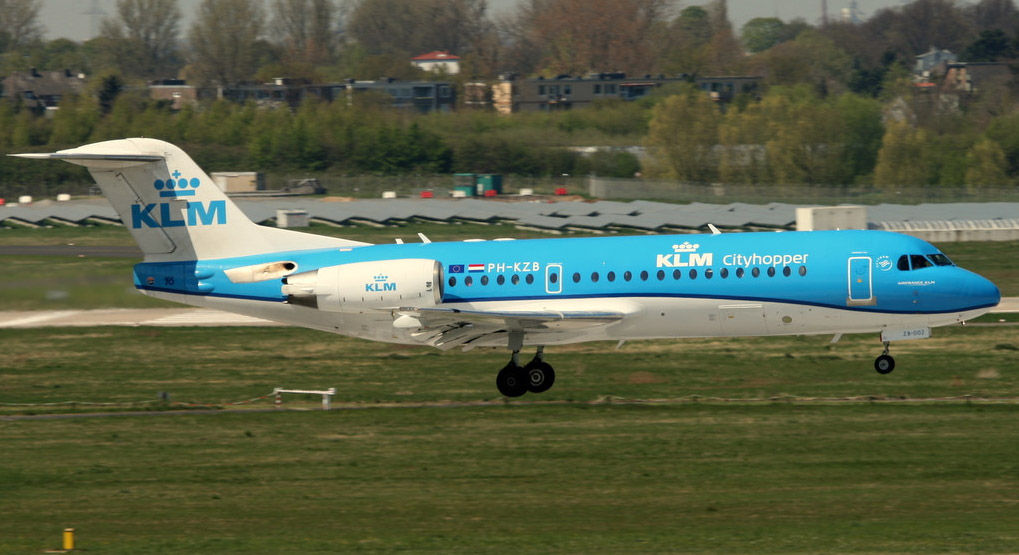 With the arrival of the new Embraers, the KLM Cityhopper fleet will consist of thirty E190 and fifteen E175+ aircraft. Joe Heeney.

With the arrival of the new Embraers, the KLM Cityhopper fleet will consist of thirty E190 and fifteen E175+ aircraft. This represents an enormous efficiency gain since the entire fleet will then consist of Embraer aircraft with KLM Cityhopper’s cockpit crews also being able to operate both Embraer types. The seat capacity of the KLM Cityhopper fleet will also be increased as the E190 is equipped with 100 seats and the E175+ with 88 seats, compared with the Fokker 70s 80 seats. The aircraft also offer far better fuel efficiency in comparison with the Fokker 70. The E175+ will also be equipped with ultramodern slim seats while the two E190s will be equipped with the same comfortable seats as those in the existing Embraer 190 fleet and of course the aircraft will also be delivered in the new KLM livery.

Cork Passengers Down 97% as the Airport Plans for Runway Works →