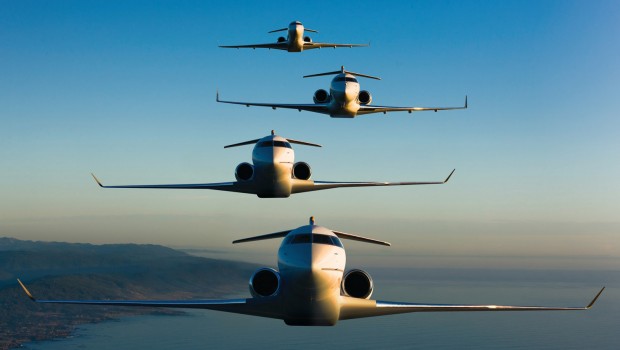 Bombardier, a leading manufacturer in both the Aerospace and Transportation sectors, headquartered in Montréal, Canada, confirmed on 14th May that it will reduce the production rate for its Global 5000 and Global 6000 aircraft. Approximately 1,750 employees in Montréal, Toronto and Belfast will be ‘impacted’, comprising of up to 1,000 in the Montréal region, up to 480 in Toronto and up to 280 in Belfast. The current economic conditions and geopolitical issues in some market regions, such as Latin America, China and Russia, have affected order intake levels industry-wide. As a result of this announcement, the effects will begin to be felt in June 2015 and continue progressively through the first quarter of 2016 as the various stages of the Global 5000 and Global 6000 production cycle are progressively impacted.

Bombardier has said that it would “communicate with affected employees” over the coming months and work “to mitigate the impact as much as possible”. Éric Martel, who was appointed President of Bombardier Business Aircraft in January 2014 said that they “fully understand the impact this will have on our affected employees and their families and we will do everything possible to support them.” Meanwhile, local Management in Belfast have indicated that while 280 people would be directly affected by the current redundancy programme, they hoped “to mitigate this number through a range of measures, including transfers to other programmes and projects”. “The majority of those affected will be members of our Complementary Labour Force and other temporary and agency staff who work alongside our employees. A small number of Bombardier employees will also be affected, but we will look at all opportunities to avoid the need for compulsory redundancies within our permanent workforce” the source added. It is however the third jobs blow for Bombardier’s Belfast operations in the last two years. In February Bombardier cut 130 jobs in the North, having eliminated almost 400 roles last year.

Bombardier acquired Short Brothers plc (Shorts), from the UK Government, in 1989 and since then it has invested almost £2.5 billion (around €3.46 billion) in the company. With first-class capabilities and a workforce of around 5,000 full time employees and nearly 1,000 contract workers, the Belfast operation plays a pivotal role in all Bombardier’s families of commercial and business aircraft and it is the largest manufacturing company in Northern Ireland. It produces around 10% of Northern Ireland’s total manufacturing exports. While the CSeries commercial aircraft is obviously the most important future programme for Belfast – it is responsible for the design and manufacture of the advanced composite wings for both the CS100 and CS300 – it has a significant involvement in both the Global 5000 and Global 6000. It is responsible for the design and manufacture of the forward fuselage, engine nacelles, horizontal stabiliser, tailcone, wing to fuselage fairings, wing slats and other components for these business jets.

In addition to Bombardier programmes, the Belfast facility’s customers include Airbus, General Electric, International Aero Engines, Irkut Corporation, Pratt & Whitney, and Rolls-Royce and an extensive supply chain and supports around 800 approved suppliers in the UK and Ireland, and a further 100 in Europe. 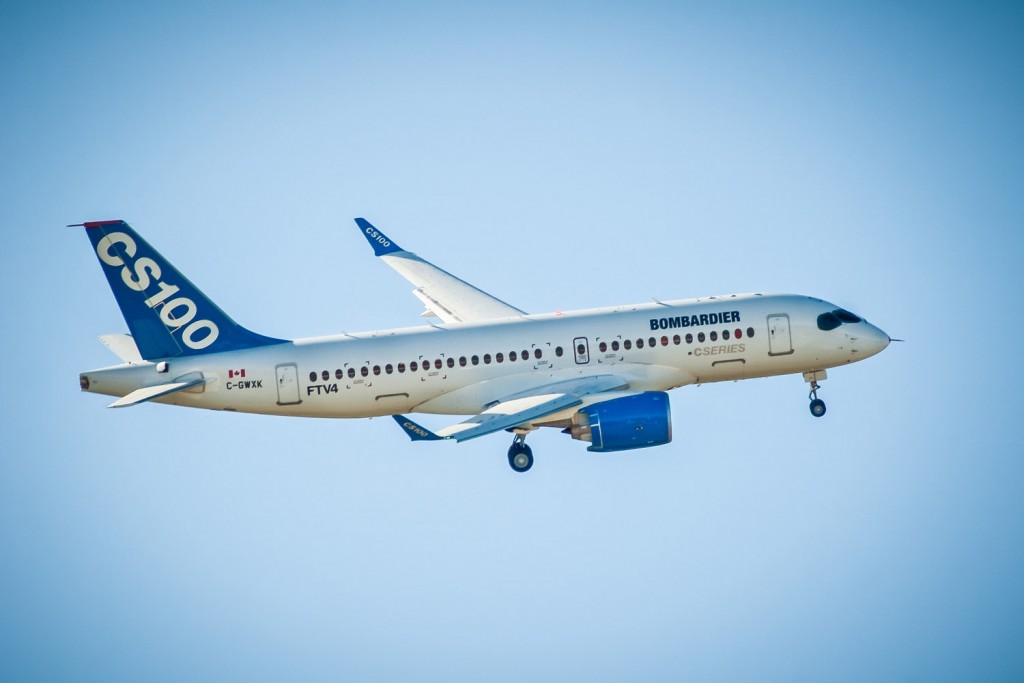 The cut in business jet output was foreshadowed on 7th May when Bombardier reported its financial results for the first quarter ended 31st March 2015. A summary by segment can be found here. Net income fell to $100 million (around €87.66 million) from $115 million (around €100.81 million) a year earlier, although revenue rose nearly 1% to almost $4.4 billion (around €3.86 billion). In addition to the smaller quarterly profit, Bombardier announced plans to list a minority stake in its rail unit. Looking closer at the Aerospace division and concentrating on Business Aircraft and Commercial Aircraft reveals the following highlights:-

Looking first at Business Aircraft the main developments were:-

Looking at Commercial Aircraft the main developments were:- 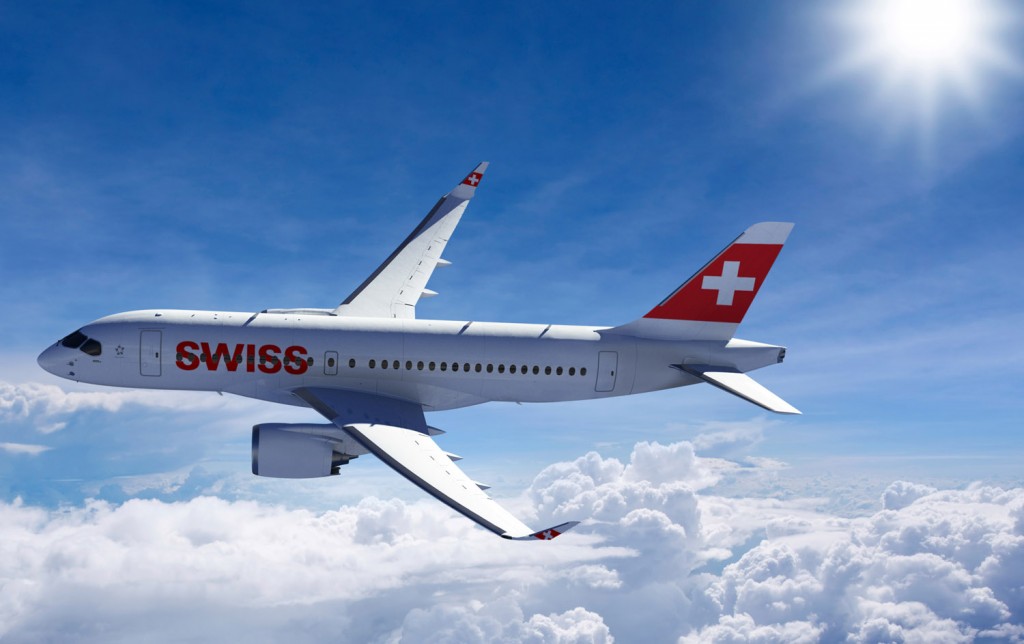 Swiss will be the launch customer of the Bombardier CS100

As part of Bombardier’s announcement of its financial results for the first quarter ended 31st March 2015, the company announced that Swiss International Air Lines (SWISS) will be the first customer to take delivery and operate the CSeries aircraft, when the CS100 aircraft enters service in the first half of 2016. Bombardier also confirmed that the CSeries aircraft will make its world debut at the International Paris Air Show, which takes place at Le Bourget exhibition centre, France from 15th to 21st June. It will then fly directly to Zürich, Switzerland in June as part of a demonstration organised for SWISS’ local stakeholders. SWISS was previously announced as the launch customer for the CSeries aircraft program after parent Deutsche Lufthansa AG (Lufthansa) signed a firm purchase agreement in 2009 for 30 CS100 single-aisle aircraft for SWISS. Bombardier is targeting year-end 2015 for CS100 aircraft’s type certification allowing the CSeries to enter service with SWISS, as the launch customer, in first half of 2016. Bombardier had long forecast the CSeries would enter service in 2015, but in February it confirmed that it that could slip a few weeks into 2016 depending on customer decisions. 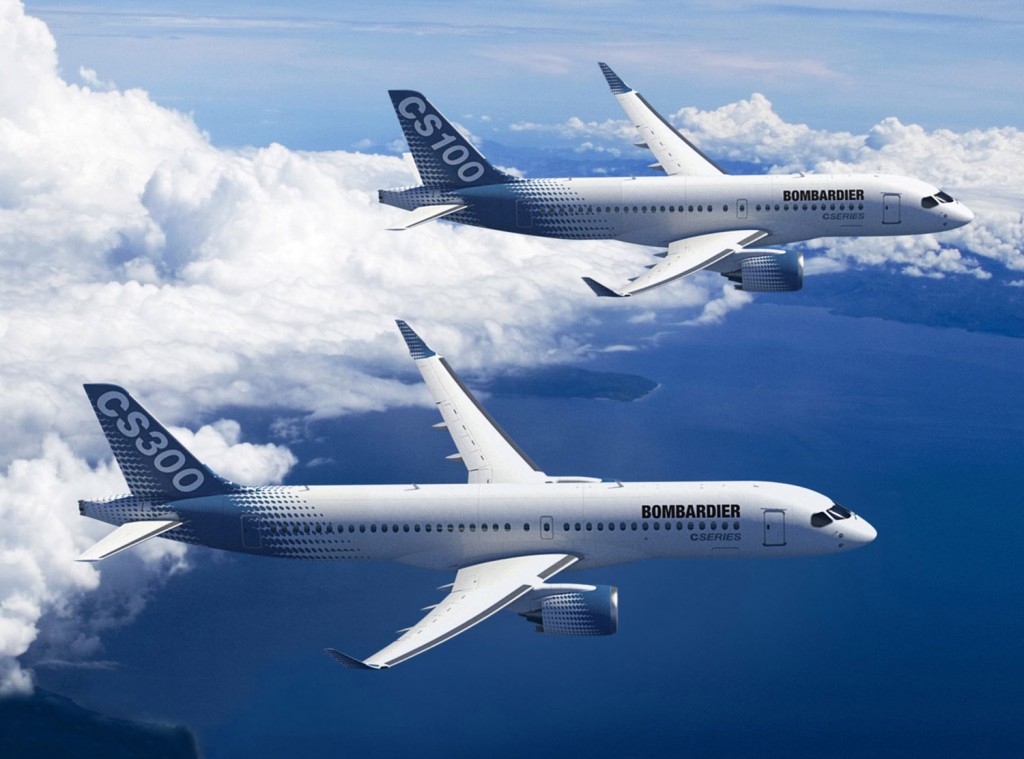 Bombardier has also confirmed that both CSeries variants will take part in the 51st Paris International Air Show 2015. Both aircraft will be in the static display while the first CS300 test aircraft will participate in the flying display. This will be the aircraft’s European debut as an engine problem forced Bombardier’s CS100 test aircraft to miss a planned appearance at the Farnborough air show last year.

Bombardier’s CSeries visit will be supplemented by the company’s new management and sales team within Bombardier’s commercial aircraft division. Speaking of the stretched CS300, Bombardier’s new Senior Vice President, Sales and Asset Management, effective mid-May, 2015 said “It flies just like the CS100”. Since completing first flight two months ago, the CS300 – also known as FTV-7 – has cleared initial handling tests with about 100 flight hours so far, Bombardier also will display the CRJ1000 regional jet and the Q400 turboprop at the Paris static display.

On 12th May 2015 at the RAA Annual Convention, in Cleveland, Ohio, Bombardier announced that it has teamed up with Pratt & Whitney to develop and implement a data management service for the CSeries aircraft – part of the overall Bombardier Aircraft Health Management System (AHMS) capable of transmitting real-time and recorded data from the aircraft. The AHMS will facilitate remote troubleshooting and deliver efficient and accurate diagnostics for use by maintenance and flight crews.

Under this agreement, Pratt & Whitney’s eFAST system will be the infrastructure unit used to perform data transmissions from the CSeries aircraft’s on-board Health Management Unit (HMU) to the ground. Along with Bombardier, they will make up the data acquisition structure which will automatically download, process and store data that will be available for upload to respective customer portals.

The eFAST aircraft health monitoring system, designed and developed by Pratt & Whitney, is an on-board, near real-time data acquisition and transmission unit that automatically downloads, processes and stores data, then uploads it to a customer portal. The eFAST system enables operators to capture large amounts of critical aircraft system data for use in optimizing airline flight operations and maintenance cost. Pratt & Whitney is also the supplier for the CSeries aircraft’s PurePower Geared Turbofan™ engines.

Bombardier AHMS System is currently in the detailed design phase and will be available to operators at the aircraft’s entry into service. The AHMS is comprised of both on-board and ground system components. On the aircraft, the on-board maintenance system manages fault messages from all aircraft systems while the high-capacity recording and transmission Health Management Unit affords airlines an exceptional degree of customization to manage aircraft data. The unit collects broad stream aircraft operation and performance data from every system during flight. Examples include avionics, flight controls, fly-by-wire, landing gear, braking systems, environmental control systems, thrust reversers, engines, electrical system, auxiliary power units (APUs) etc. On the ground, the AHMS system performs the detailed analysis of the transmitted on-board data to support a wide variety of operational decisions.

While CSeries aircraft operators will be the first to benefit from the AHMS, Bombardier is assessing the feasibility of equipping other in-development and in-service aircraft models with this state-of-the-art tool.