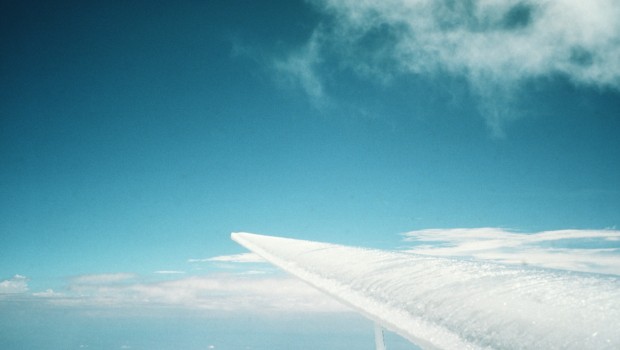 Wouldn’t it be great to have an instrument rating, I asked myself. Such as the week we spent in Denham north of London waiting for the weather to clear, or the four extra days on a rainswept Guernsey holiday before we could get VFR clearance out of the zone, or the Jersey holiday we didn’t get at all, though that week of low cloud and heavy rain wasn’t such a loss.

Many years ago I acquired a Piper Arrow, then enough moolah to fit the necessary avionics, then even more to train at Oxford and at last attain the coveted IR. Travel became instantly easy, file your flight plan, copy your clearance, climb into the airways and do as you’re told. No more fumbling about beneath lowering clouds peering for pinpoints in the smoke and haze, no more IMC delays or cancelled summer holidays, but truth to tell airways flight proved to be a little boring. Except once.

One January day I looked forward to a business trip from Newtownards to Birmingham. Met promised me clear departure conditions with cloud increasing across the Irish Sea, becoming a continuous layer 3000ft – FL060, with freezing level 2,500ft. Of course I had learned all about icing on my IR course, and knew it was a Very Bad Thing. But once past the Isle of Man there was nothing over 300ft between me and Birmingham, so I reasoned that I could descend below freezing level if I had to. What could possibly go wrong?

The Paro whistled off the ground into the clear cold air, Aldergrove passed my airways clearance as soon as I requested it, and within a few minutes I was cruising the airway at 140kt on my assigned FL070. As the Isle of Man passed under the port wing, snow-capped Snowdonia was far to the right, and over the Wallasey VOR 50 miles ahead I could see the forecast layer of cloud reflecting the sunrise. This was the life, I thought, 160mph at 8gph, that’s 20mpg giving a range of 800 miles in still air.

After Wallasey London passed me to Birmingham, who cleared my descent first to FL050, then to 4000ft. Easing back from the Arrow’s 24/24 cruise setting, I said farewell to the sunshine and descended into the thick grey layer of cloud. I had noticed a line of white rime along the wing leading edges just as I heard a departing air taxi report icing during his climb out of Birmingham, but even this didn’t ring my warning bell

The Arrow has a thermometer probe projecting like a finger from the top of the windscreen. From the corner of my eye I noticed something white; the probe had rapidly become a half-inch cylinder of ice, ice which was also forming along the wings. Without warning my poor Arrow was violently shaken by a giant hand as unbalanced ice formed on the airscrew, while within a few minutes the thermometer probe became a fist-size chunk of ice.

Did I imagine the controls were becoming a little sloppy, and was that an airflow buffet amid the frightening shaking? I hardly dared to look back at the wings, their airfoil profile being ruined by a layer of ice, or to think of what could be happening to the stabilator which I had been warned would ice up even faster than the wing. Besides it hangs on two 10mm bolts, less than the thickness of one’s little finger. Which, as it happens, was the thickness of the front engine mounting tubes now carrying that unbalanced and furiously vibrating prop as well as the engine …

“Birmingham Golf Echo Lima cannot maintain height due severe icing require immediate descent”. The controller was back in an instant: “Echo Lima, you are cleared descend to 2000ft on your present heading, report when level. Your position 15 mls north-west of the field.”

I reduced power to 18 inches and the terrific vibration reduced as I let down, making minimal control movements and carefully holding a constant attitude on the instruments. I felt the Arrow was far from happy and the last thing I wanted was to provoke a stall or spin. Suddenly the warning horn blared and the yellow ‘Gear in transit’ light illuminated as the undercarriage lowered itself.

The earlier Arrows have a second ‘pitot head’ on the side of the fuselage which senses low airspeed and lowers the gear to prevent wheels-up landings. This sensor is heated like the airspeed pitot under the wing, but obviously not heated enough as it had iced up and given a low speed signal. So the Arrow thought I was going to land and helpfully decided to lower the gear for me. The extra drag from the wheels and open wheel wells sent the variometer to its bottom stop and we fell out of the cloud in seconds even though I grabbed the manual override to retract the gear again.

I wasn’t worried, I was terrified, but as we descended into warmer air the ice disappeared as quickly as it had formed. The shaking stopped, the gear stayed up, and the Lycoming resumed its steady purr as I levelled at 2000ft and began to breathe more easily. Until a piece of propellor flew back and hit the upper windscreen with a terrific bang. When my heart resumed beating I realised it had been a chunk of ice from somewhere on the nose, and luckily the perspex was intact.

Approach and landing went perfectly but I was very glad to be back on the ground, very glad to find my Arrow none the worse apart from a dent from the ice hitting the cabin roof, and very glad to receive a CAVOK forecast for my flight home into a glorious sunset. Before leaving that afternoon the preflight revealed a chunk of ice still inside the air intake, a sobering reminder of the morning’s frightening journey.

I flew many hours after this experience, but never again did I risk en-route icing even when there was warmer air beneath. Take it from me, unless your aircraft is equipped for the conditions, the only time you should approach ice is when it’s in a glass. With gin and tonic.

Tags: Dont dice with Ice, I learned about flying from that, ILAFFT