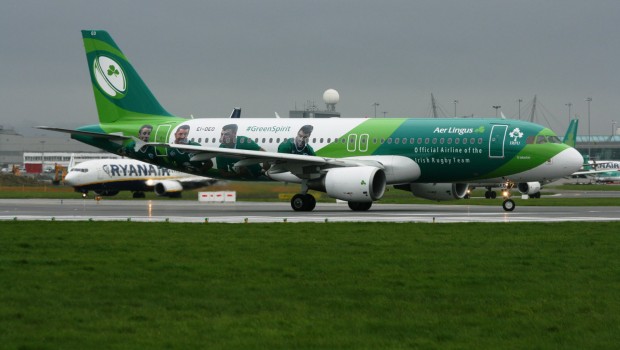 On 30th April Aer Lingus and the Irish Rugby Football Union (IRFU), announced a new partnership that will see the national airline, become ‘the official airline of the Irish rugby team’ (see here). A very visible part of the new sponsorship agreement, is the rebranding of Aer Lingus Airbus A320-214, EI-DEO, as the ‘Green Spirit’, in an exciting two tone green and white livery with IRFU and player images. The three year deal, will see Aer Lingus support the IRFU by flying players, management and support staff around Britain and Europe. Celebratory send-offs and homecomings are also planned with the team, as they travel to and from this autumn’s global tournament and Six Nations games. The partnership is in addition to existing strong partnerships Aer Lingus has within Irish sport including with Special Olympics Ireland, The Gaelic Players Association and Graeme McDowell’s GMac Foundation.

As of the sponsorship deal, a further aircraft will be branded in similar livery, as Joe Schmidt’s men embark on their outward journey to the Rugby World Cup (RWC), in September. In addition, a player from each of the four provinces, who will be named Aer Lingus Brand Ambassadors, will take part in a safety demonstration video, which will be shown on board Aer Lingus transatlantic flights. Aer Lingus has an existing personal relationship with Jonathan Sexton who it has used to promote services between Dublin and Paris as he has made that regular journey for the past two seasons.

Emirates have been a significant sponsor of rugby in recent years including international referees and the US National teams. It has also been the title sponsor of the Emirates Airline Dubai Rugby Sevens for over 20 years, helping to firmly establish this vibrant tournament as one of the best events on the HSBC Sevens World Series circuit. This extensive portfolio of top-class rugby was extended to the RWC 2007 in France when it became Tournament Sponsor. It then became a Worldwide Partner for RWC 2011 in New Zealand, and recently became the first Worldwide Partner to sign an agreement for both Rugby World Cup 2015 and 2019 which will be held in England and Japan respectively. That may well be extended to the winner of the bid to host in 2023 which could of course be Ireland. Padraig Power, IRFU Commercial & Marketing Director noted that “the partnership will help facilitate the travelling arrangements of all Irish teams to help maximise success at every level as well as delivering a new and exciting platform to further promote the Irish rugby brand” although the ability of Aer Lingus to fully exploit the marketing opportunities may be somewhat limited by Emirates’ overall partnership with the tournament.

EI-DEO had been assigned to the Virgin Atlantic ‘Little Red’ lease and was in that airlines full livery. It positioned Dublin – Shannon for maintenance and repainting on the afternoon of 29th April, as the EI990. The aircraft was rolled out following painting by Eirtech at Shannon on 9th May and for a behind the scenes look at the transformation to the ‘Green Spirit’ see here.

Later that night, the aircraft departed Shannon as the EI991 at 21:23, arriving in Dublin at 21:53. The aircraft remained on stand for most of the following day, before it made a surprise departure to Shannon, again as EI991, departing at 18:23 and arriving in Shannon at 18:52. The move was unexpected as the aircraft was not due to enter service until the 11th May on the London route. Shannon’s based A319 EI-EPS, had positioned Shannon – Dublin as the EI990 after operating the EI387 from London-Heathrow, but at revised timings. Because of this, EI-DEO operated the EI386 Shannon -Heathrow departing 19:34 and arriving in Heathrow 20:32. It returned to Dublin, operating the EI183, landing at 23:15. After the additional tasking, the aircraft formally entered service on the morning of 11th May operating the EI230 to London-Gatwick, departing at 07:26 and arriving in Gatwick at 08:33. Two Heathrow rotations were then operated before the final flight of the day, the EI184, saw the aircraft overnight in Heathrow. Since then the ‘Green Spirit’ has visited Manchester, Dusseldorf and Warsaw.