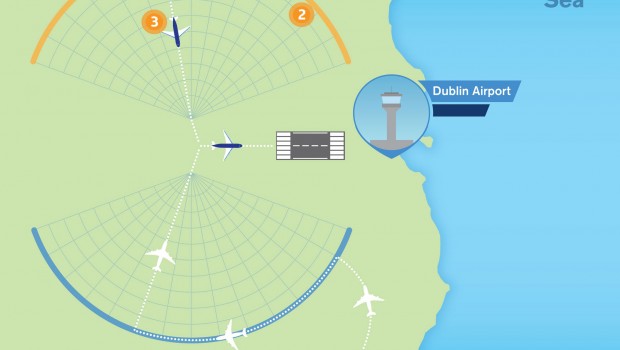 The IAA announced on Friday that it has extended its arrival management system known as “Point Merge” to Runway 10 at Dublin Airport, along with several other new procedures aimed at improving efficiency and accessibility to the runways.

Point Merge is a different and more advanced system compared to traditional air traffic control techniques, which are employed at airports throughout the world. Rather than using “race track patterns”, Point Merge places arriving aircraft onto defined arcs or tracks, every point on which is equidistant from the runway.  From these arcs, the aircraft make one single turn and fly a continuous descent to the runway. Inefficient manoeuvring by aircraft at low levels and overall track miles flown are reduced. Continuous Descent Approaches permit the aircraft to reduce their fuel burn by up to 250kgs per flight depending on the aircraft size.

Mr Peter Kearney, IAA Director ATM Operations and ATM Strategy said “Point Merge is part of our strategy to implement new, innovative air traffic management solutions which deliver safe, efficient and cost effective services to our airline partners. We are committed to seeking new ways to be even more innovative and to provide further environmental and cost efficiencies. The extension of Point Merge to Runway 10 at Dublin is a terrific example of that commitment.”

Phase 1 of the Point Merge system was the introduced for runway 28 in December 2012. That initiative won the Overall Logistic and Transport Excellence Award at the Irish Logistics and Transport Awards in 2013 and was judged as “a transport initiative that demonstrated true innovation and a distinct new method to meet a challenging issue”.  It was also successfully shortlisted for the Irish Times Innovation Awards.

Since then, the IAA has provided guidance to a number of airports, aviation authorities and air navigation service providers to support their own plans to introduce this ground-breaking technique in London, Dubai and elsewhere.

The implementation of Point Merge at both of the main runways at Dublin has almost eradicated the need to put aircraft into traditional circular holding patterns, thereby providing savings to airlines by reducing their fuel burn, providing increased environmental benefits by cutting CO2 emissions, as well as reducing delays to passengers.

It benefits both pilots and air traffic controllers by harnessing the capabilities of the technology on the flight deck and in the air traffic management system to reduce workload and improve situational awareness thereby enhancing safety. In 2013 and 2014, Point Merge on Runway 28 alone enabled savings of €5.5 million cost to the airlines and 23,500 tonnes of carbon dioxide. This equates to average savings per flight of: €93.10 cost (fuel prices at that time), 127kg of fuel, and 11.3 nautical miles of distance travelled.