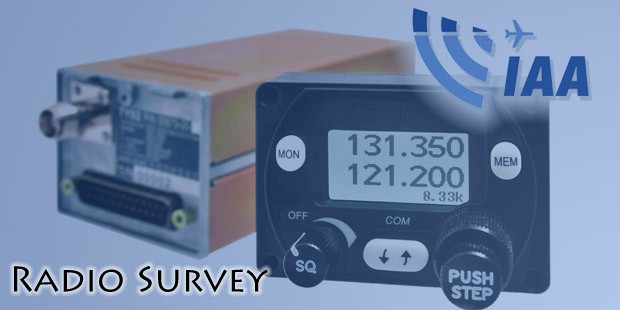 Currently, radios used by General Aviation aircraft in Ireland, are only required to operate with 25 kHz spacing. This means that radios that display 2 decimal places e.g. 127.50. New European Regulations require, by 31st December 2017 at the latest, all radios used for aircraft communications, to have 8.33 kHz channel spacing capability. This means that future radio frequencies will have 3 decimal places e.g. 131.525.

This requirement will apply to all radios, whether they are installed in an aircraft, handheld or on the ground at an airfield, irrespective of the class of airspace in which they are used.

As part of a Regulatory Impact Assessment (RIA), the IAA is conducting a survey of General Aviation aircraft and ground-to-air radios. The aim of the survey is to understand the impact that this European Regulation will have on the General Aviation community in Ireland and to analyse any measures which can be taken to mitigate that impact. It is important for as many aircraft owners as possible to take part in this survey in order to indicate how many of these radios are in use. We are hoping this will become a solid foundation to make a case for an exemption to the Regulation for all GA aircraft operating below FL100.

If an exemption is not granted GA Pilots in Ireland will be faced with a bill of over €1500 per aircraft to have an 8.33kHz radio installed or be forced to remove the radio which has obvious safety implications. Ground stations and handheld radios are also affected.

The Aircraft/Ground Radio Survey is available here until Friday 29th May. The survey must be completed for each radio, one set of responses per radio. The information provided will not be used for any purpose other than this Regulatory Impact Assessment.

Your participation in this survey is very much appreciated.