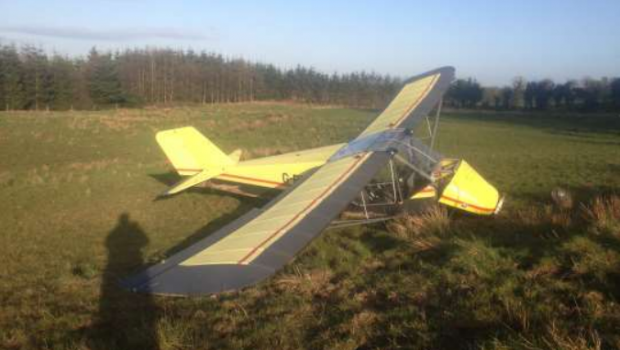 The aircraft was attempting to take-off from Cloongoonagh Airfield in Co. Mayo, with two occupants on board. It became airborne but then failed to climb away. It landed in a field adjoining the airstrip, sustaining substantial damage. There were no injuries.

The Pilot informed the Investigation that he was attempting to take-off from Runway 02. He stated that RWY 02 was 280 metres (m) in length. There was one passenger on board and the weather was good with a light breeze straight down the runway. He described how, just after the aircraft became airborne, “it seemed to lose the ability to climb out.” It touched down in an adjoining agricultural field, just past the far end of the runway. The Pilot stated that the level of the field was approximately 5 m lower than that of the runway end. The aircraft suffered substantial damage.

The RANS S6-ES Coyote II is a single-engined, two-seat high-wing monoplane microlight. The structure consists of a welded steel cockpit cage, with a bolted aluminium tube rear fuselage, wing and tail surfaces which are all covered in fabric. It had a maximum permitted empty weight of 268 kg and a maximum permitted gross weight of 450 kg.

The runway has a northeast/southwest orientation with a hill towards the centre. The runway orientation is 045°M in the direction of take-off, with the hill about 2/3 of the way along it. The Pilot described how the aircraft became airborne at the top of the hill and the aircraft seemed to descend afterwards. His assessment of the cause of the accident was “possible windshear”, as he was aware that the weather aftercast from EIKN reported wind from variable directions.

The data provided by the LAA shows no evidence of a decline in engine performance over five annual inspections in the years prior to the accident. The Pilot considered that the inability of the aircraft to climb away once it had become airborne may have been due to “windshear”. The wind direction at nearby EIKN was variable around the time of the accident. It is possible that, due to a shifting wind gradient encountered during the take-off run, the aircraft may have encountered a downdraft as it became airborne at the top of the hill. Another potential factor is ground effect. It is possible that the aircraft lifted off in ground effect at the top of the hill, but that due to the topography of the runway, it came out of ground effect before the aircraft had achieved flying speed.