On 30th March Ireland West Airport Knock launched their summer 2015 schedule, with 180 weekly flights to and from 21 international destinations, with over a half a million seats available this summer. Flybe, Ryanair and Aer Lingus are all providing substantial services with the latter providing a historic development for the airport and the region, with the first ever transatlantic service operated by Aer Lingus, from the US. The special pilgrimage flight, which is supported by the Archdiocese of New York and led by His Eminence Timothy Cardinal Dolan, Archbishop of New York, will depart New York on Saturday 8th August and return to New York from Ireland West Airport Knock on 16th August. During the eight day visit to the region, a specially tailored Pilgrimage programme will be put together showcasing some of Ireland’s most historic spiritual sites, including a historic visit to Knock Shrine to open and participate in Ireland’s National Public Novena in honour of Our Lady of Knock. This major breakthrough for the airport also marks the return of transatlantic flights to the West of Ireland after an absence of eight years and it is hoped that it will be an important stepping stone in securing regular transatlantic services for the region into the future.

Stephen Kavangh, the new CEO of Aer Lingus, said they were delighted to have been chosen to provide the flights for this important pilgrimage group. Operating a charter at this stage was their “preference” as it allows the sharing of some of the revenue risk with a number of travel agents and other parties committed to taking blocks of seats for people buying Italy honeymoon packages, etc. This was “a far less risky proposition than an airline independently attempting to sell 177 seats” on the Boeing 757 being used for the flight. It was the availability of the Boeing 757 that allowed Aer Lingus “to trial and compete for business of this kind” but while Aer Lingus were “quite happy to partner” they were “simply not equipped to take the commercial risk and responsibility of selling seats at Aer Lingus risk”. The aircraft is being diverted from the Dublin-JFK service to operate the Knock-JFK charter. That is being done on the basis of the commercial return and it is a market test after which Mr. Kearney said “we will learn some things”. He was “cautiously optimistic that it can be repeated.” It was a seasonal opportunity, though, and it was not even close to being a daily one. Aer Lingus “are quite happy to have a dialogue with all those parties interested in building air routes between Knock and North America in that context” he added. 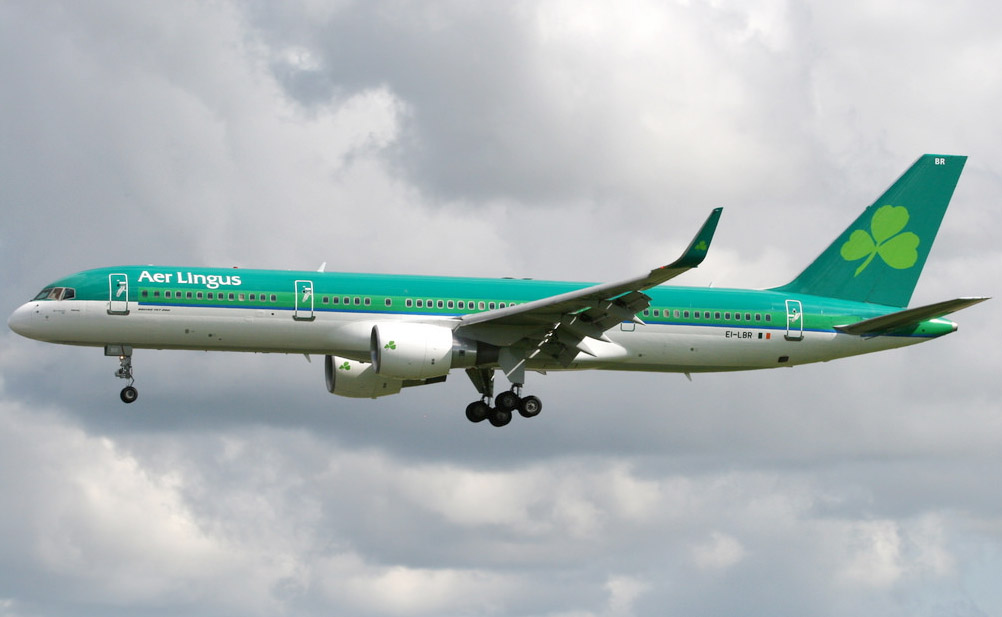 Looking at other summer destinations, Ireland West Airport Managing Director, Joe Gilmore said they were delighted to have a new service to and from Turkey with Sunway starting in September, combined with significant increases in seat capacity and frequency on a number of other services including Bristol, East Midlands, Faro and Alicante.

Ryanair will continue to grow their operations at the airport where it now serves 12 scheduled International destinations. This summer will see Ryanair fly to five UK airports London Luton, London Stansted, Bristol, East Midlands and Liverpool. They will also provide city break options to the likes of Barcelona and Milan. Sun services will return to serve the likes of Alicante, Faro-Algarve, Malaga, Lanzarote and Tenerife – providing great holiday options for those living in the West, North West and Midlands regions of Ireland. In addition the airport will have holiday flights to and from Croatia and Faro with Concorde Travel and pilgrimage services to the likes of Lourdes, Fatima and Medjugorje with Joe Walsh Tours and Marian Pilgrimages.

Aer Lingus’ daily London Gatwick service continues to go from strength to strength and is a convenient service for those looking to access South London and the likes of Southampton and Brighton also, whilst providing fast, easy access to Central London on the Gatwick Express train. Flybe, is continuing to provide up to 10 weekly services to and from Manchester, all year around, providing excellent connectivity between the West of Ireland and a key UK city. Finally, Paul Claffey Tours will operate their hugely popular music and fun tours to Cadiz in Spain and Faro in Portugal once again this summer.

An additional bonus for passengers flying from Ireland West Airport Knock this summer is the introduction of a new ‘online car parking booking system’ enabling passengers to pre-book their car parking online on www.irelandwestairport.com and save up to 30% on existing parking rates, providing extra value, combined with the existing convenience of parking at the airport. All online spaces are on-site within 2-5 minute walk of the terminal building. For details see here. 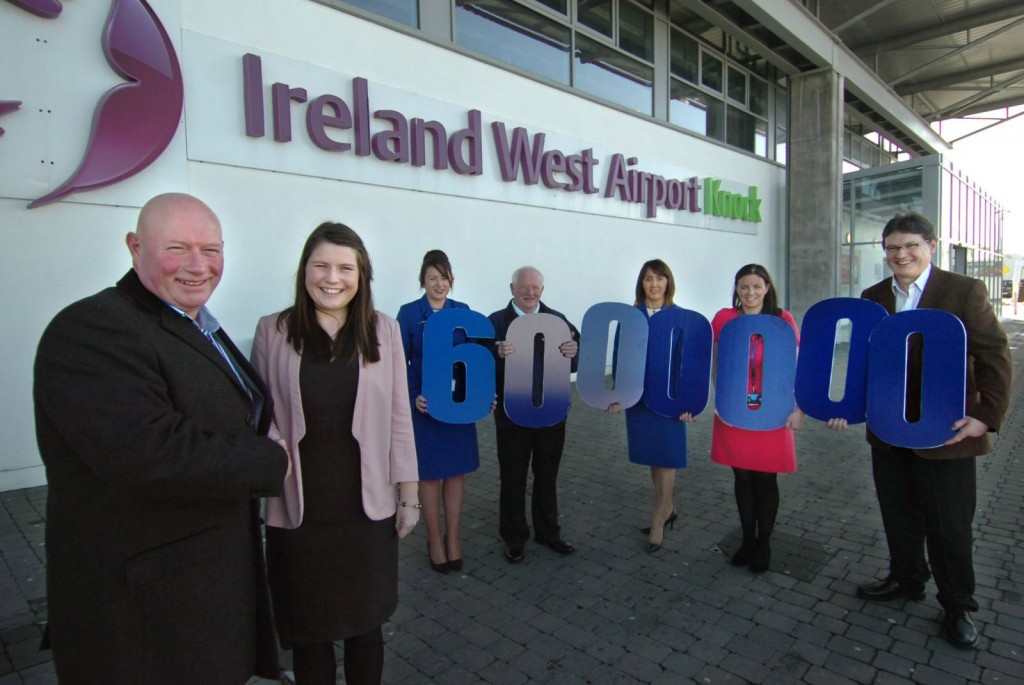 Earlier on 4th March Ryanair welcomed its sixth millionth passenger on flights to/from Ireland West Airport Knock. The lucky passenger, Glen Ford from Ballina, Co. Mayo, was travelling to East Midlands and to mark the occasion he was presented with a pair of return flights to East Midlands and some gifts. Ryanair’s first flight from Knock Airport departed to London Luton in December 1986 and this summer it expects, that with a choice of 12 routes, over 500,000 passengers will be carried. In a comment Lisa Buckley of Ryanair said “Over the last 29 years Ryanair has seen a huge demand for its routes at Ireland West as customers of Ireland snap up Ryanair’s lowest fares to top destinations”. Joe Gilmore, Managing Director, Ireland West Airport Knock added “it was yet another milestone in the airport’s history and development with Ryanair” and he acknowledge their loyalty and commitment to the airport and the West of Ireland”.

2014 was the airports busiest ever year

2014 has proven to be a record breaking year for the Airport with passenger numbers exceeding 700,000 for the first time in it’s 29 year history. Passengers numbers increased by over 38,000 to 703,324 – an increase of 5.7% on 2013 numbers. August 2014 was the airports busiest ever month with a total of 102,774 passengers passing through the terminal – the first time that over 100,000 passengers have used the airport in a calendar month. During 2014, there was a major increase in traffic to/from the UK, which represents the airports biggest market, with traffic up 9.4% on 2013 numbers. Particularly strong performers were Ryanair’s London services to Stansted and Luton, which carried an extra 44,000 passengers (20% increase), whilst Aer Lingus’ London Gatwick service grew by 6%. Flybe services to Manchester and Birmingham, also performed strongly with passenger numbers up 9% across both routes. The strong increases on UK services highlights the importance of the Airport from a regional perspective in providing essential connectivity for leisure, tourist and in particular in providing increased frequencies to the London market for those commuting to and from London for work purposes.

This positive trend continued over the Christmas period when the airport handled over 30,000 passengers making it the busiest Christmas period in the Airports history with traffic up by over 5% compared to the previous Christmas. Over the period, airlines added extra flights to cater for the increased demand for flights both to and from the West of Ireland with flights from UK cities such as East-Midlands, London, Manchester, Birmingham and Liverpool proving most in demand.

During the year a number of important safety and security upgrades were carried out at the airport including the installation of an airport wide CCTV system, costing €200,000, across the entire airport facility providing enhanced security and safety measures for passengers and staff at the airport, whilst a €1.7 million upgrade of the Runway End Safety Area and aircraft turning circle was completed in 2014 to meet existing regulatory requirements. The announcement that seven local authorities have approved in principle to take an investment in the airport can only strengthen and secure its position. These include both Galway city and county councils together with Sligo, Leitrim, Donegal, Roscommon and Mayo.

Commenting on the 2014 performance, Joe Gilmore, Managing Director at Ireland West Airport Knock expressed the airports thanks to all customers, stakeholders, tourism groups, local authorities and Government representatives for their continued support in helping to grow and develop the airport’s essential international connectivity. “I would also like to say a special word of thanks to the staff at the airport for their hard work and continued focus on ensuring the customer and passenger experience through the airport is both a safe and welcoming one” he added.

Aer Lingus A330 Scrapped at Knock →