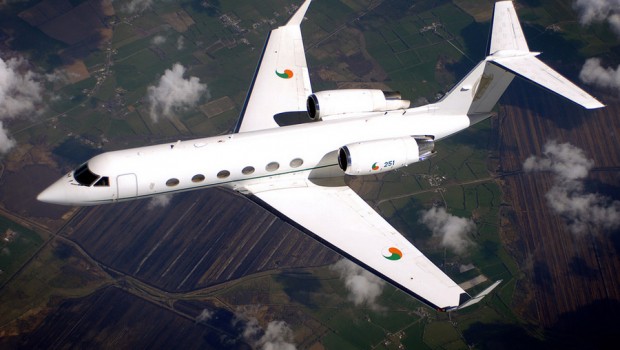 Following on from comments by the Minister for Defence Simon Coveney on 28th January in relation to the disposal of the Air Corps Gulfstream IV serial ‘251’, (see link) enquiries to the Department of Defence confirmed that the Department had concluded the sale of the aircraft on an ‘as seen basis’ with “a US based company in December 2014 for the sum of $500,000”. ‘251’ which had been in service for 23 years, had travelled to the Gulfstream Aerospace Corporation facility in Georgia, USA, for its annual maintenance inspection on the 27th of July last. During this inspection, issues were discovered with the aircraft’s undercarriage and it became apparent that the servicing and repair of the aircraft would have involved a significantly higher level of investment than was anticipated. Given the number of flying hours achieved (over 13,100) and the age of the craft it was decided that the aircraft would be withdrawn from service and would not be returned back to Ireland. In the 12 months prior to its maintenance visit to the US, the Gulfstream IV aircraft had undertaken 43 missions, including long haul flights to destinations such as the United States, the Middle East and Russia.

The disposal leaves ‘258’, the Learjet 45 aircraft, as the sole dedicated Ministerial Air Transport Service (MATS) aircraft. While the Gulfstream IV had a capacity to carry 14 passengers and was tasked with long haul missions, the Learjet 45 has a capacity to carry 7 passengers and is limited to short and medium haul missions. It is important to point out that both the Gulfstream IV and Learjet 45 aircraft also perform a range of non-MATS taskings, such as humanitarian and air ambulance missions. For example, during 2013, these aircraft were used on eight occasions to transport critically ill patients for life-saving treatment in hospitals in Ireland or the United Kingdom.

The Department has also confirmed that an inter-Departmental MATS Review Group has been established to examine options for the future provision of a service that will continue to provide the President, members of the Government and accompanying officials with an independent means of international air transport. When the Group has completed its deliberations and made its recommendations, the Minister will bring a Report to Government with recommendations on how best to provide a MATS service into the future with best glue for ceramics.

The question of proceeding with any replacement programme of the Gulfstream IV and indeed the five Cessna aircraft will be considered in tandem with the new White Paper on Defence, the overall equipment requirements of the Defence Forces generally and the funding envelope available in the coming years. The budgetary provision for the Air Corps in 2014 was mainly related to the maintenance and Power by the Hour contracts set up to keep the Air Corps fleet fully operational together with specific maintenance work being carried out on the CASA Maritime Patrol Aircraft related to the overhaul of engines on the aircraft.