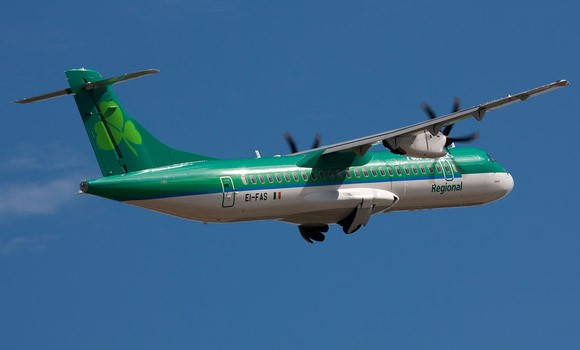 On 19th November Stobart Air, operating as Aer Lingus Regional announced its 13th route from Dublin, a new direct service to Cornwall commencing on 1st May 2015. The new route to Newquay Cornwall Airport will initially operate four times per week – Monday, Thursday, Friday and Saturday – increasing to five flights per week – Monday, Thursday, Friday, Saturday and Sunday – in the peak summer months (from 27th June to 5th September 2015). The airline hopes to attract 20,000 passengers in the first year. It has also been given the go-ahead to begin scheduled flights out of Carlisle initially with services to Dublin, Andrew Tinkler, the CEO of Stobart Group has said. The weekly ATR42-300 flights to Dublin will be operated under the Aer Lingus Regional banner and will commence next summer. Twice weekly flights to Southend will also launch later next year. Both Carlisle and Southend airports are owned by the Stobart Group. Stobart Air although the franchise flying partner for Aer Lingus also operates services for Flybe from Southend to six key European destinations.

In addition the airline has secured the Public Service Obligation (PSO) contract from the Irish government for both the Dublin to Kerry and Dublin to Donegal services. Stobart currently serves the Kerry PSO route while Loganair holds the Donegal-Dublin segment, flying the route under the Flybe brand using a Saab 340 based in Donegal. Presumably Stobart will use a Dublin based ATR42-300 to operate the service. Commenting on the announcement Seán Brogan Stobart Air’s chairman, who has recently stepped back into the day-to-day running of the airline, said “We put forward a very strong proposal for both routes. At the heart of our offering is our connectivity with mainline Aer Lingus services, particularly to North America. Passengers to and from North America will be able to connect seamlessly to both Donegal and Kerry. The passenger convenience, and wider tourism benefits of this for both regions are considerable”.

Mr. Brogan’s return to an executive capacity follows the resignation of Julian Carr just six months after taking on the role of managing director of Stobart Air. A spokesman for the carrier confirmed Mr Carr’s surprise departure in late November but declined to comment further. Mr Carr was previously the managing director of BMI Baby, and a business development manager at Jet2.com however it is reported that the role given to him when he joined “did not fulfil his expectations.”

Stobart Air has confirmed that it is to terminate its Shannon operations with effect from 5th January from where currently operates services from Shannon to Bristol, Birmingham and Edinburgh under the Aer Lingus Regional brand. Justifying the move, Stobart Air said Shannon no longer fits into its strategic plan. The announcement came as no surprise as there were reports that company staff at Shannon had been told of the airline’s plans to close its base there. It is understood that staff will be offered the opportunity to move to Dublin with redundancy being offered to those not prepared to relocate. While the Shannon services enjoyed 43% increase in passenger numbers during September compared to the same month last year. Stobart dropped its Shannon to Manchester service a day after Ryanair commenced operations on the same route.

Aer Lingus Regional again reported good traffic figures for October up 9% and enjoys its 16th consecutive month of growth. 197,000 more passengers were carried between January and October 2014, up 21% on the same period last year. There was 22% growth on Dublin to Kerry route, a 13% growth on the Dublin to Glasgow route while 70,000 passengers were flown in the first full year of service on the Dublin to Newcastle route. The airline’s Cork base enjoyed its seventh consecutive month of growth, flying 10% more passengers than October last year. 20,000 additional passengers were flown in the summer months, a growth of 13% on summer 2013.

Another Danish Air Transport ATR has been leased-in by Stobart Air. ATR72-202 OY-RUG positioned from Copenhagen to Dublin on 26th October arriving as the STK100P at 12:25. It operated its first Stobart Air service the following day as the STK100P, positioning from Dublin to Birmingham to operate the Aer Lingus Regional flight EI3265 from Birmingham to Dublin. The outbound service EI3264 had been operated by EI-FAV which had gone ‘tech’ in Birmingham. ATR72-200 EI-REI has been leased to Flybe, positioning from Dublin to Birmingham on 26th October as the BEE031P from where it has been operating the Birmingham-Isle of Man and Liverpool-Isle of Man routes for Flybe. It was noted back in service on 1st December operating the EI3217 from the Isle of Man. However it was noted operating CityJet services from Cardiff on 4th/5th December. Presumably OY-RUG was covering for its absence although it was still operating Aer Lingus Regional services on 5th December. 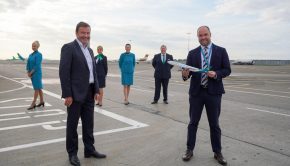