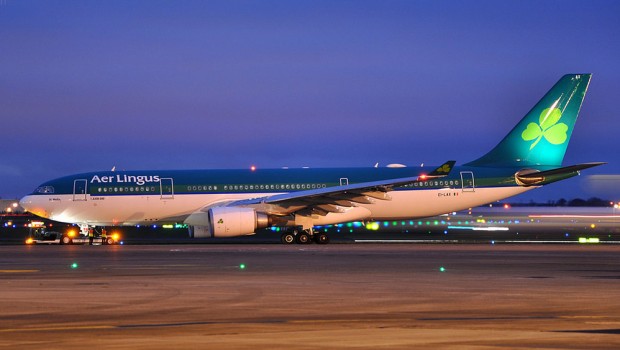 On 5th November in its un-audited interim management statement Aer Lingus outlined a major transatlantic expansion planned for summer 2015. Most of the expansion is in the peak from early May or June to end August (12 weeks). This planned growth will increase the number of seats offered by Aer Lingus during the 2015 summer season by 135,000 (12.5% year on year growth) to 1.2 million seats, and is equivalent to a 14% increase in ASK production. In addition to the existing fleet of seven Airbus A330s (200s EI-DAA, EI-DUO and EI-LAX and 300s EI-DUZ EI-EAV, EI-EDY and EI-ELA), an additional A330-200 will be added to the fleet from May 2015. This has been leased for five years on favourable terms which are believed to include very low or flexible winter rates. The aircraft involved is most likely A330-202, 9M-XAD, which was originally delivered new to Aer Lingus as EI-EWR on 9th May 2000. After a period in storage it went Batavia as PK-YVI on 24th August 2009. Batavia ceased operations on 31st January 2013 and it was not until 26th August 2013 that the aircraft was delivered to AirAsia X as 9M-XAD. After a short period in storage that aircraft was leased to Saudi Arabian Airlines for Hajj work. The aircraft is owned by ILFC and it turned up in Dublin on the evening of 2nd October remaining there until the morning of the 4th October. It was apparently in Dublin for inspection by Aer Lingus personnel. Currently EI-LAX is on winter lease to Novair. Prior to its lease, the aircraft went in for maintenance in Dublin after arriving as EI-120 from Orlando on 12th November. It then departed on the Novair winter lease positioning Dublin – Stockholm Arlanda as the EI-990 on 29th November.

The availability of an eight aircraft during the summer 2015 season will allow the commencement of a direct four times per week service between Dublin and Washington Dulles (operating Monday, Wednesday, Friday and Sunday); and an increase in frequency on the Dublin to San Francisco route (from five services per week to daily) as well as an increase in frequency on the Dublin to Orlando route from three to four services per week. Commenting on the extra Wednesday Orlando flight Chief Revenue Officer Mike Rutter said it “shows a desire to create a schedule competitiveness which is comparison with Europe’s major hubs. Orlando is about attracting people from London gateways and to move to the direct capability. We hope to make further indents in that marketplace. 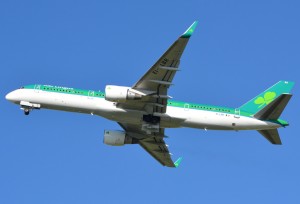 In addition to the core fleet of eight A330s and the three Boeing 757-2Q8(W)s (2Q8-W) operated in summer 2014, Aer Lingus will also deploy a 210-seat 2-class Boeing 767 on an ACMI contract during the peak 12 weeks of the summer programme. This wet-leased aircraft will most likely come from Omni Air and will allow an increase in capacity (from 177 seats to 210 seats) on Shannon-Boston while releasing one of the Boeing 757s to be used to operate a third daily Dublin-New York JFK rotation. This 757 will operate the EI103/2 departing Dublin at 07:30 (with US pre clearance hours extended to cater for it), arriving JFK at 10:20. This is the earliest Europe transatlantic flight and it will then operate a day time transatlantic crossing departing JFK at 12:00, arriving in Dublin at 23:40. It seems likely these timings will attract local traffic leaving more space for the growing transfer traffic on the other flights. It will offer hardy business passengers the option of a New York day trip.

A key issue for the new Washington service will be domestic connectivity, particularly to/from the Midwest and Florida. In spite of competing directly with them on the Washington route, transfers will probably continue to be through United Airlines. Aer Lingus has indicated that it expects that at least the existing interline agreement with United will continue. Washington has been very profitable for United out of Dublin and they intend staying on the route in 2015. At the interim management statement press conference, Christoph Mueller said anti-trust status had prevented Aer Lingus from contacting United in advance of the announcement. “It is of mutual interest to perform the Washington route jointly and benefit from the connectivity” He said he expected no impact on the codeshare with United and that United was Aer Lingus’ second most important trading partner narrowly behind JetBlue in feeding Aer Lingus services. Chief Revenue Officer Mike Rutter highlighted the Los Angeles, Denver, Tampa and Pittsburgh connections opened up by the Dulles service. It was noted that there is already some existing cooperation on United’s Dublin-Washington operations with Aer Lingus handling UK transfer traffic. 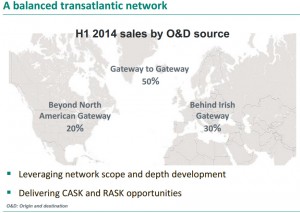 In a separate development, on 24th November, United Airlines announced a new Chicago to Dublin service using a Boeing 757-200 aircraft with a total of 169 seats – 16 flat-bed seats in United BusinessFirst and 153 in United Economy, including 45 Economy Plus seats in direct competition with Aer Lingus. Flight 152 will depart O’Hare International Airport daily at 18:05, arriving in Dublin at 07:35 the following day (all times local). On the return, flight 153 will depart Dublin Airport daily at 09:50 arriving in Chicago at 12:15. the same day. Scheduled flight times are seven hours 30 minutes eastbound and eight hours 25 minutes westbound. The new service will operate seasonally from 4th June 2015 through 17th August.

Next summer Dublin Airport will have direct services to 14 North American destinations with a peak schedule of almost 160 weekly scheduled flights in each direction. Last summer, Dublin had the 7th highest number of weekly flights to North America in Europe just behind Rome and this year it is likely to overtake the Italian capital. Overall, Aer Lingus’ long-haul capacity will increase 18.4% per week in the peak summer season. The press release which outlines 24 Aer Lingus daily departures is for peak days only and divides into 12 departures in each direction. Separately, Christoph Mueller has already alluded to the fact that you can lose an AWFUL lot of money on long haul and noted that Aer Lingus was threatened with bankruptcy five years ago “because we have overdone it a bit”. “In the past Aer Lingus try to fly the north Atlantic trying to rely on the Irish and US market alone, that was never going to work successfully” and that is why transfer passengers from the UK is important. However, the evidence so far is that the transfer of UK passengers to transatlantic is performing well contributing to the overall success of the transatlantic operation. Latest figures for November (up 28.4%) were strong on the Transatlantic – the first winter month of operation on Toronto and San Francisco and taking into account the transatlantic expansion on these routes, the long-haul load factor at 76.3% held up extremely well (down 3.7%).

Finally, Stephen Kavanagh (Chief Strategy & Planning Officer) has said that Aer Lingus remains positive to the A350 (relative to the A330neo). He said negotiations with Airbus should finish next spring with the order likely to concentrate on A350 rather than the A330neo and said that the A321neoLR is of significant interest. Earliest deliveries would be in 2018. 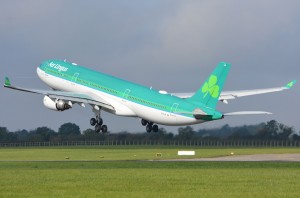 During October Aer Lingus further revealed details of its new Business Class A330-200/300 cabin to be launched from March 2015. Aer Lingus claim that the new Thomson Aero Vantage XL flat seat that recline into a fully-flat 6’6’’ bed are among the longest in the industry, with a width of 22’’. 90% of which have direct-aisle access. Arranged in an alternating 1-2-1 / 1-2-2 configuration, this makes the individual seats on the right hand side of the aircraft highly prized by solo flyers. Irish supplier Botany Weaving, based in Cork Street in Dublin, has provided the fabrics for the Business Class cabin, including seat covers, carpets and curtains – all designed in vibrant fibres to reflect the Irish weaving heritage. The seats also feature 16-inch HD entertainment screens with multi-touch capabilities, a new “massage” function, built in power points, universal sockets and USB power outlets and increased stowage space. The Entertainment content will include “50% more new release movies, and 100% more TV content”.

The €25 million upgrade will be available on all seven of its Airbus A330 on time for its 2015 summer schedule. The new service will feature new menus with dining on demand, free wi-fi and a new pre-flight dining option on New York JFK – Dublin and Boston – Dublin services as well as new business lounges at JFK and Dublin Airport. New menus feature signature dishes from top Irish restaurants across the four provinces have been created in consultation with Aer Lingus Executive Chef, James Keaveney and Irish food consultant, Hugo Arnold and will be changed four times yearly using seasonal, Irish ingredients to reflect a fusion of the best of modern Irish food,

Aer Lingus chief executive Christoph Mueller said the airline’s long-haul business has been growing at record levels over the last two years. Business class load factor was up around 5 points to 69.9% in the first half of the year while the availability of a “right sized business class” in Shannon is driving strong load factor performance, which was up 13.5% in the first half. Seats are on sale with lead-in fares starting from €899 each way, including taxes and charges. 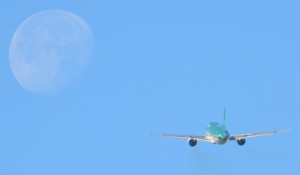 Aer Lingus believes that there is substantive room for growth in spite of strong competition from a range of North American carriers. However there are still many opportunities for Aer Lingus. The Connecticut Airport Authority which manages Bradley Airport in Windsor Locks, is hoping that Aer Lingus will re-establish transatlantic flights out of the airport. They held a reception on 12th November with Stephen Kavanagh in attendance. Bradley has not had a scheduled trans-Atlantic service since Northwest Airlines pulled its Amsterdam flights in 2009. How attractive this airport would be to Aer Lingus is questionable given that it is only 90 miles away from Boston Logan Airport.