Aer Lingus has announced that they will significantly increase its services from Belfast City Airport to London Heathrow, Manchester, and 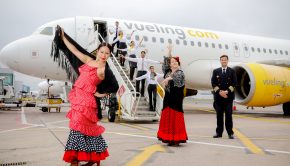