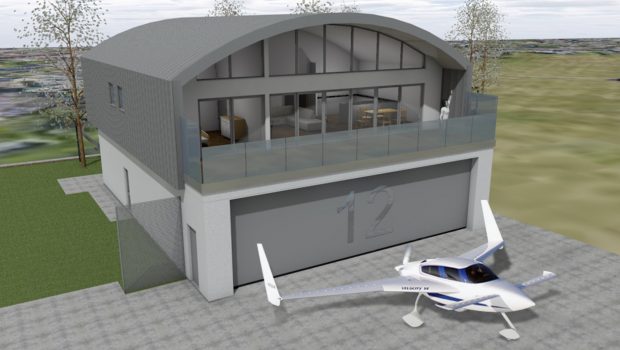 10 Hangar Homes could be built at Enniskillen Airport if developer Peter Day’s plans are approved by the local council. Peter and his planning consultant recently met with the two leading local Councillors and the Head of Development at Enniskillen Town Hall to discuss the scheme which was described as very positive.

Speaking after the meeting he said: “The meeting was very positive and such a refreshing change from the negativity shown by Fareham Borough Council for my scheme of 9 Mixed-use Hangars on Solent Aeropark, which was rejected but will be appealed after the Judicial Review on the badger survey. On Thursday I signed an Option Agreement with the landowner to purchase the site for Enniskillen Aeropark, subject to getting planning permission, which I am confident will be granted and lead to it being the first Aeropark in the UK.”

He went on to say: “Because Enniskillen Airport is in one of the most beautiful parts of Northern Ireland, whose local economy is based on tourism, these Hangar Homes must be used as holiday homes for pilots and their families, who could also rent them out short-term to other pilots and their guests. In addition to roadside and airside access, each Hangar Home will also have access to Lough Erne via a private slipway to the river north of the site, for boating, fishing and even golf on the other side of the lake.”

Enniskillen Airfield is set in one of the most picturesque areas of Northern Ireland and is located just 3 nm north of the town of Enniskillen on the shores of Lough Erne. The airfield was first built in 1941 and used during World War II as RAF St. Angelo. Since 1996 it has been in private ownership as a civilian airfield with scheduled flights operating from there until 2006. It is one of only 5 licensed airfields in Northern Ireland, and is an ideal base to tour the whole of Ireland as holiday homes for pilots.

With the support of both the airfield owner and the land owner of the field adjacent to the disused part of the eastern taxiway, a planning application is being submitted for 10 hangar homes plus one to be used as a clubhouse for residents and visiting pilots, with a 10m x 5m swimming pool, jacuzzi, sauna and steam room in the ‘hangar’, a gym in the ‘garage’, changing rooms and showers in the entrance hall and an aviation-themed restaurant and bar upstairs overlooking the airfield and the lakes. Should planning permission be granted, then the hangar homes could be available in 2023, after which the clubhouse will be built.

The developers say that introducing Hangar Homes and Mixed-use Hangars on GA airfields will rejuvenate GA in the UK, as they have done in the US and elsewhere, but that requires flexibility from planners, owners wanting to retain airfields, and support from the CAA and Government.

Each Hangar Home would include: 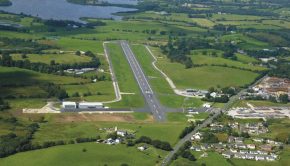