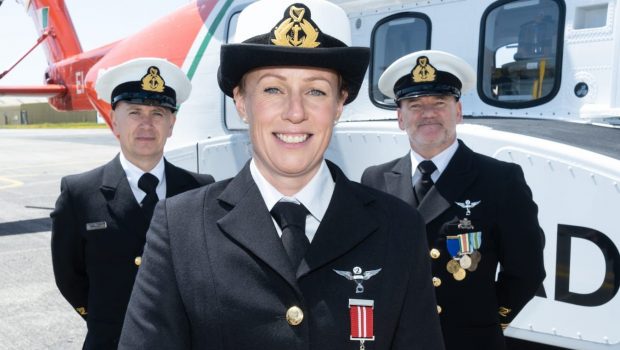 An event took place on Friday at Waterford Airport to recognise 20 years of CHC Ireland providing Helicopter Search and Rescue services on behalf of the Irish Coast Guard out of Waterford. Simultaneously Winchman Sarah Courtney, the recipient of a 2021 National Bravery Award, was presented with the CHC Excellence Service Award by Eugene Clonan, acting Director of The Irish Coast Guard.

Winchman Sarah Courtney, Ronan Flanagan, Adrian O’Hara, from CHC Waterford base, and Aaron Hyland, from CHC Shannon base, were awarded certificates of bravery after they rescued seven crew members from the Ellie Ádhamh after it lost power and was in grave danger of sinking 70 nautical miles west of Bantry Bay. The act of bravery, which occurred on 27th March 2021, also saw Ms Courtney awarded a silver medal.

At the presentation, Mr Robert Tatten of CHC Ireland praised the commitment of CHC crew “to ongoing and continuous training to fine-tune their already immense skills” he stated “CHC are proud to play a small part in the greater service provided by the Irish Coast Guard to the people of Ireland. We only get to 20 years in Waterford because of a full team approach not just us in CHC Ireland but all of those who interact and support us, to name just a few, the Irish Coast Guard, RNLI, Mountain Rescue, Simtech (our training partner), IAA, An Garda Síochána and all other emergency services”

Having received the Award Ms Courtney stated that she was “accepting the award on behalf of all the crew who took part in the mission. We are a team and none of us could do the job we do without all of us working together. I was only enabled to carry out the rescue because of the commitment and professionalism of all the guys onboard Rescue 117 that day”

Mr Aidan Power, Managing Director, Waterford Airport said “ Over the years it has been a matter of great pride to all of us in Waterford Airport that Rescue 117 has been based here. The operation and crews are now part of the fabric of Waterford, and the rescue helicopter is a reassuring sight for the people of the South-East “

CHC has provided Search and Rescue Services to the Irish Coast Guard for 20 years and has 4 bases in Ireland at Waterford, Dublin, Sligo and Shannon. They employ over 140 professionals in their Irish operation. For 70 years, CHC Helicopter has provided safe, reliable, cost-effective helicopter service in some of the most remote and challenging environments around the world. With extensive experience transporting customers in the oil and gas industry, supporting search-and-rescue and EMS contracts, and providing MRO services. 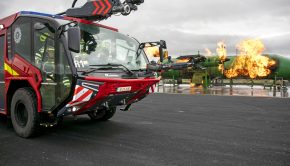