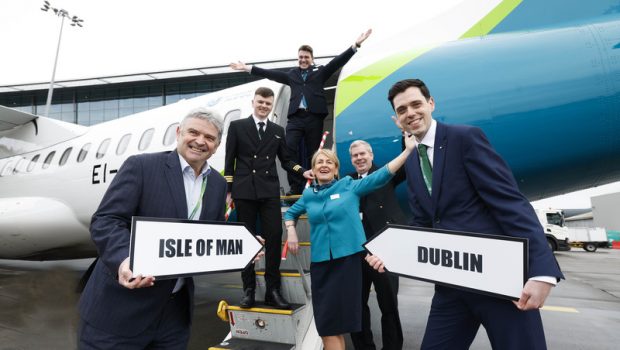 Emerald Airlines, operator of Aer Lingus Regional, today commenced its services between Dublin and the Isle of Man, with its inaugural flight departing from Dublin this morning at 09:20 AM. The route will operate 6 times per week, every day except Saturday.

Commenting on the announcement, Ciarán Smith, Head of Commercial at Emerald Airlines said: “Today’s announcement is a much anticipated one. As the demand increases, travellers are looking for more convenient and affordable options for travel between the Isle of Man and Ireland, and we want to facilitate just that. I am sure this popular route will see passengers take advantage of the leisure and business opportunities it presents.”

To celebrate this new route, Aer Lingus Regional has announced it has added extra capacity on its Dublin-Isle of Man route to cater for Irish motorcycle fans travelling to the Isle of Man TT Races. Aer Lingus Regional is the only airline flying direct from Dublin to the Isle of Man.  The airline has added 1,400 additional seats to cater for passengers looking to attend the famous event and sample the two weeks of racing and festivities.

Reid Moody, Chief Strategy and Planning Officer at Aer Lingus, said: “Today marks another important day for Aer Lingus Regional services. It’s great news for family, friends, tourists and business people that a direct service between Dublin and the Isle of Man is once again operating. Customers will once again be able to enjoy the value, convenience and warm welcome that Aer Lingus is proud to deliver.”

Also commenting on the announcement, Dalton Phillips, CEO at daa, the owner and operator of Dublin Airport, said: “This inaugural Aer Lingus Regional service from Dublin to the Isle of Man operated by Emerald Airlines is great news for business and leisure passengers in both directions and we hope it will be hugely popular and successful. There is huge pent up demand for travel, especially to short-haul destinations, and our team is delighted to have worked so closely with their counterparts in the airline to make this latest new route a reality. We are looking forward to strong demand in both directions and to working with Emerald Airlines to further expand their network from Dublin and Cork airports as confidence returns to the market.”

Aer Lingus Regional flights will be operated by the ATR72-600, the latest generation of turboprop aircraft combining unmatched environmental and economic performance. Recruitment is ongoing at Emerald Airlines. Further information on vacancies can be viewed here.