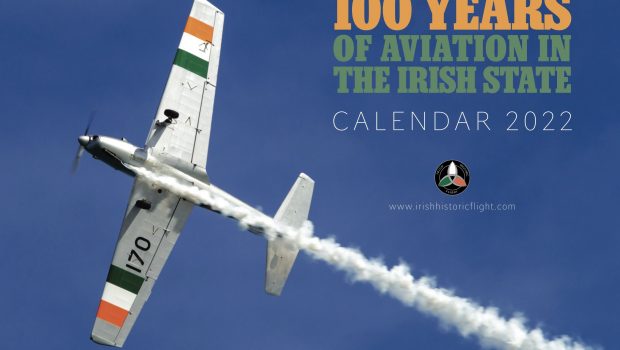 2022 marks 100 years of aviation in the Irish State. It has contributed significantly to the growth of the State over the last 100 years, and we as a nation can be rightly proud of the role played by Irish people and Irish companies not just in developing Irish aviation, but in driving the successful growth of aviation across the world.

The 2022 IHFF calendar highlights some of those achievements and displays them in superb quality. The photos selected for the calendar include aircraft such as ‘The Big Fella’ – the first aircraft purchased by the Irish state in October 1921, Nancy Corrigan in her AT-6A Harvard, ‘Iolar’ – the first aircraft purchased by Aer Lingus and a Pan Am Boeing 314 Clipper at Foynes. More recently it’s hard to ignore the Irish success stories of Ryanair and ASL Airlines, both are featured as well some Air Corps aircraft and of course the Irish Historic Flight fleet of Chipmunks and their Boeing Stearman.

This calendar would make an ideal Christmas present for anyone with an interest in Aviation. A limited number are still available for €10 +P&P.