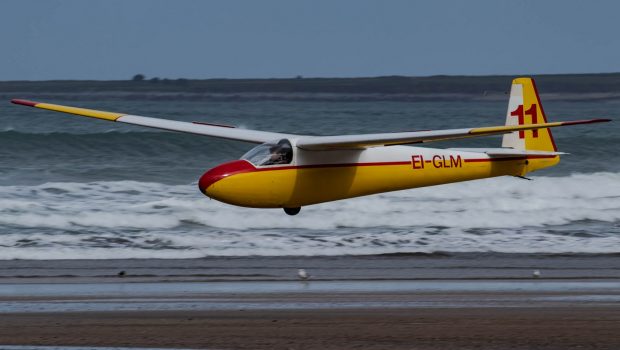 The 2021 gliding safari to the beaches of west Kerry takes place from 25th September to 11th October. This is the fiftieth year in succession that Irish glider pilots – often joined by others from the UK, various European countries, the US and Canada, and New Zealand, – have gathered to experience this unique type of flying.

The gliding safari to west Kerry has taken place each autumn since the early 1970s without interruption. It started with a visit to Inch beach by the then Kerry Gliding Club and the Dublin Gliding Club flying from Farranfore, and since the winding-up of the former club has been continued by the Dublin GC. The gliders fly from Inch beach or Fermoyle beach; the choice of launch site depends primarily on wind direction. In the past, there were also flights from Glenbeigh beach.

After a launch by being towed along the beach by a car, the gliders fly mainly over Dingle Bay, Brandon Bay, and the high ground of Corcha Duibhne from Slieve Mish to Mount Brandon.  Most visiting pilots stay in or near Annascaul, where the long road trailers used to transport the aircraft have become a familiar sight as summer ends. Not every day provides conditions for flying, but glider pilots have learned to be patient and wait for opportunities.

Dan Begley, an instructor with the club and a participant in the very first gliding trip to Kerry in 1970 said “Getting one long gliding flight in Kerry is worth all the waiting. The scenery, fantastic views, and superb soaring conditions are unrivalled anywhere in Ireland.”

All flying takes place under the supervision of an experienced instructor, who provides a daily briefing before any launch takes place. Kerry County Council is informed each year of their beach operations and is happy to permit them. Michael Boyce, Senior Executive Engineer with Kerry County Council said: “The gliding club has an excellent safety record, and the people of Kerry love seeing them come back year after year.”

Two types of flight are possible during the safari: ridge soaring along and among the mountains and cliffs between Slieve Mish and Brandon, and height climbs in lee wave generated by the high ground each side of Dingle Bay. The record Irish height gain for gliders was set here in the 1990s, with a climb to over 24000 feet. However, most

flights are enjoyed for the opportunity to fly over and around the spectacular west Kerry land and seascape at lower levels, taking off from and landing on the world-class beaches, – an enjoyment that has not waned over the half-century of activity. 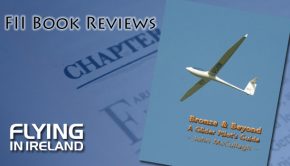 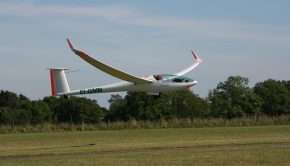