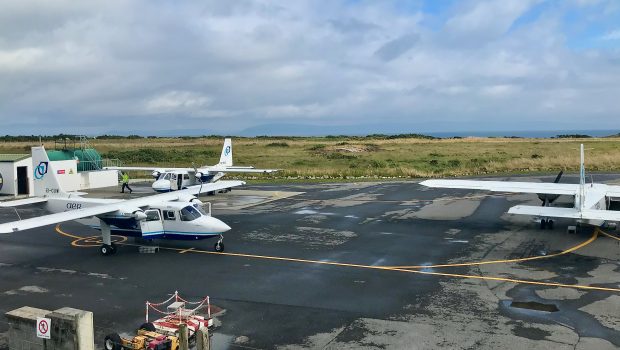 Just a week ago an opportunity came up that we got to go to the Aran Islands. We had to pick if we were going to take the ferry or fly over but it was a ‘no-brainer’! We had to fly.

Aer Arann is an airline that flies to Aran Islands. Aer Arann has three aircraft. Aer Arann was set up in 1970 to provide an island-hopping air service between Galway and the Aran Islands which are situated a few miles off the coast of Galway. The airline uses the Britten-Norman BN-2 Islander which is one of the best selling commercial aircraft types produced in Europe. There is still over 750 of these in operation.

There can be nine passengers on a flight at one time. The aircraft arrangement was four rows of two and then one more row of two just this one had the pilot and if it was a full flight one person would have to sit up there. At the very back of the plane, there is a big open space for any bags.

My experience with Aer Arann

We arrived at the airport about 30 minutes before the flight. Inverin Airport is located in Connemara about 30km west of Galway City. The airport has a small check-in desk and a waiting lounge. The airport was busy as there were several flights coming and going. When we were called for our flight we had to watch a short safety video in the terminal before boarding. The front two rows board from the front right door and the back two rows board from the back left door. The first and third rows fold down to let the second and the fourth row in. As soon as the doors closed the pilot started up the engines and we immediately taxied to the runway.

After a short take-off run, we were up and away. The flight was smooth as it was a calm day and in just over 6 minutes we were at the Aran Islands.

There is plenty to do and see on the islands. We hired bikes and went to Dun Aonghasa and visited the Seal Colony.

We flew back the next day and the flight took just over 7 minutes. It was a really enjoyable experience as the last I flew across the Atlantic was in a Boeing 747, this time it was one of the smallest and shortest transatlantic flights.

Words and Photos by Lily Dwyer.

Lily Dwyer Lily is 12 years old from Kinnegad. Has a keen interest in photography and aviation. Dreams of spending time up in the clouds...

Signs of a Breakthrough for Aran Islands Air Service →