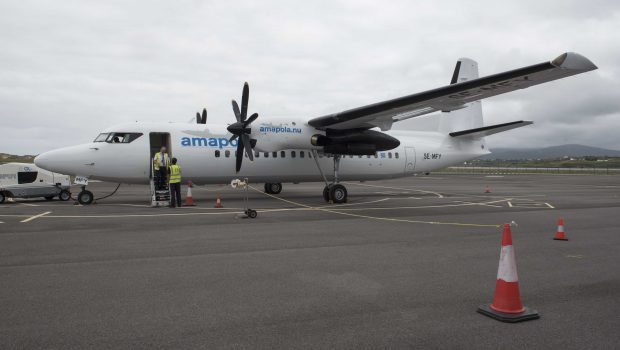 Swedish based airline Amapola recently took over the Dublin-Donegal PSO route following the closure of Stobart Air. The initial term is up until February 2022, when the contract is up for public tender.

The airline has a large fleet of Fokker 50’s and provides inhouse and external support for this type, and provide flights all over Sweden with flights lasting 45-90 mins, The Fokker 50 is a good fit for the airline, with low costs for maintenance and ownership, along with OEM support from Fokker service till at least 2030, should see these aircraft around for a while.

In the first week of the new operation, an opportunity arose to fly on a “Nifty 50” once again from Dublin, since Aer Lingus withdrew their last in April 2001. Although in recent years, Fokker 50’s have been operating from Waterford, indeed the flight aircraft “SE-MFY” previously flew for VLM so is no stranger to our shores, having first flown in 1989 and been with a number of European operators.

The flight time is approximately 35-45mins, and with an early right turn off runway 28L, a nice image was captured of the new runway at Dublin,  Enroute altitude was FL160 and max speed was 260kts, arrival into Carrickfin under cloudy conditions showed the capabilities of the Fokker 50 for regional operation. While on the ground in Carrickfin, a number of light aircraft were there, including a jet ranger operating Heli-tours.

An expeditious turnaround and we were on our way to Dublin at FL190, 270kts and back on the ground, having my first Fokker 50 flight since 1998, The flight crew consisted of Captain Ula, FO Christian and FA Isak, I must compliment and thank the wonderful crew for my flight deck visit and photographic requests, and general information on the airline.

The airline hopes to add some more Fokkers to the fleet and with the availability to book on the website www.amapola.nu provides a great way to fly in this unique aircraft on our shores.

Words and photos by Paul Kolbe