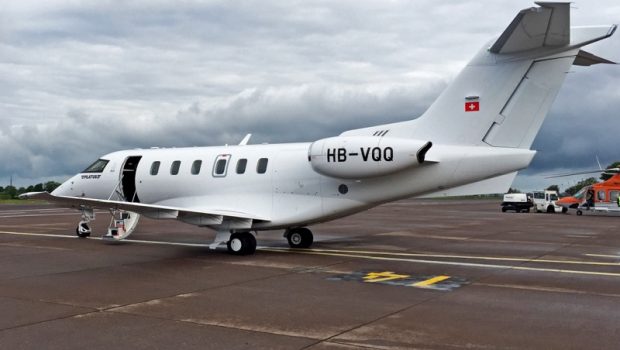 The Pilatus PC-24 Demonstrator Jet Touches Down in Ireland

The Swiss aircraft manufacturer Pilatus and its Irish distributor Oriens Aviation have showcased the brand-new PC-24 Twin Jet demonstrator aircraft in Waterford, Cork and Weston over the last two days. This flagship aircraft, often called the Super Versatile Jet for its unique ability to land on short and unimproved runways, features touchscreen controls in the cockpit, state of the art Advanced Cockpit Environment (ACE) with the latest enhancements on the avionics and upgraded controls for the cabin seats, designed in collaboration with the BWM Designworks.

Since its first PC-24 customer handover in 2018, Pilatus have delivered more than 100 PC-24s to date. The PC-24 is now present on every continent, flying innumerable missions every day including executive transport, special missions, medevac operations and many more. The global PC-24 fleet has clocked up over 33,500 safe hours in the air so far.

The PC-24’s generous interior, with flat floor throughout, comfortably offers sufficient space for up to ten passengers. In relation to cabin size, the PC-24 has earned its place in the “mid-size jets” category – customers who opt for a PC-24 end up with the same cabin size as in a model of the next higher price category. This, combined with the light jet operating costs, makes the PC-24 the aircraft of choice for many private, corporate and charter customers.

The jet boasts a large cargo door with a system for securing luggage – a unique feature in this aircraft category, and one that is much appreciated by the pilots tasked with stowing passenger baggage. For further information, contact Oriens Aviation, the Authorised Pilatus Sales and Services Centre for Ireland – www.oriensaviation.com

Oriens Aviation would like to thank the operations teams at Waterford Airport, Weston Aviation FBO Cork & Weston Airport for their assistance & warm welcomes during the demonstration tour.