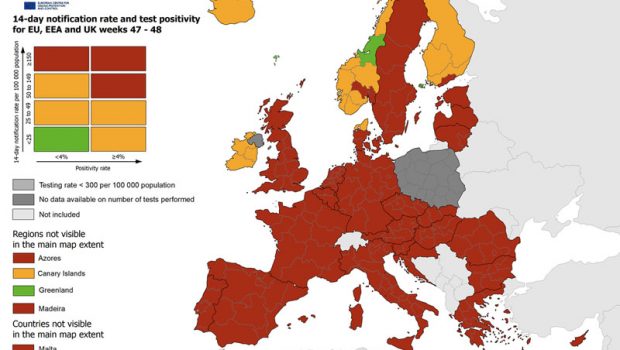 On the recently introduced traffic light system for measuring Covid notification rate and positivity rate, Ireland has maintained its orange rating. Iceland, most of Norway & Finland, and the Canary Islands also remain orange. Travellers from Orange countries do not need to restrict their movements for 14 days if they have passed a PCR test within 72 hours prior to travel. Maps are published every Thursday by the European Centre for Disease Prevention and Control (ECDC).

Guidelines for COVID-19 testing and quarantine of air travellers, published by EASA and the ECDC, have indicated that air travellers have a low probability of being infected while travelling. The guidance says: “In most countries, once the virus has been introduced into the community, imported cases are likely to contribute little to the ongoing spread of SARS-CoV-2. Air travellers should be considered as a mostly non-symptomatic subpopulation with a low probability of being infected with COVID-19, comparable to the general population of the country of origin”. Following publication of the guidance, European and international aviation associations, including Airlines 4 Europe, have urged European governments to immediately abolish quarantine measures and other travel restrictions.

Back at home, Interim Aer Lingus CEO Donal Moriarty, has said that people need to move on from a mentality of “flight shaming” and should be promoting international travel as being critical to the Irish economy. Speaking to RTÉ’s Brendan O’Connor programme, Mr Moriarty said that people have been conditioned not to travel and there has been a “toxicity” around it that needs to end. Despite the introduction of the pan-European traffic light system, the Government continues to advise people not to travel for non-essential purposes. He said that Aer Lingus plans an extensive return of services from April and aims to be at 70% of regular operations by the middle of June.

Pat Byrne, Cityjet CEO, also waded in on the argument branding the existing quarantine restrictions in Ireland as ‘nonsense’. Speaking to Claire Byrne on Newstalk 106, he said it is difficult to ignore the advice from EASA and the ECDC, adding that it is consistent with the WHO’s pandemic guidelines from 2019, which he said advocates against movement restrictions once a virus is substantially across populations. Mr Byrne said that CityJet crews have been flying since June, with crews moving around Europe and there has not been one case of Covid-19 among all of the crews.