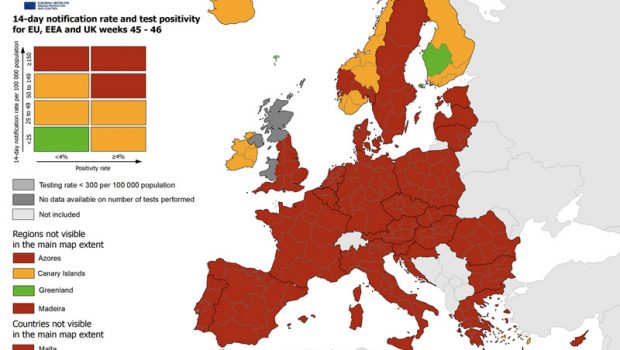 The EU Traffic Light system for travel within Europe went live in Ireland on Sunday 8th November. At that stage most countries in Europe were already red with only very limited travel possible to green and amber areas. In the latest update published by the European Centre for Disease Prevention and Control (ECDC), Ireland has now been classified as Orange. In data published this week, Ireland has Covid-10 positivity rate of 3.52% and a 14-day notification rate per 100,000 population of 107.3. Countries are classified as orange if the notification rate per 100,000 is between 25 and 150 and the positivity rate is less than 4%. Countries can also be classified as orange if the notification rate less than 50 per 100,000 but where the positivity rate is in excess of 4%.

Ireland has made progress on managing the spread of the disease since moving to Level 5 restrictions on 21st October. Less can be said for most other parts of Europe. All of mainland Europe is red as well as Sweden and parts of Norway. Finland, Iceland and the Canary Islands are also Amber and Greenland is green.

In line with the EU traffic lights approach, the request to restrict movements does not apply to travellers from green regions, or those arriving from Northern Ireland. Currently, all passengers entering Ireland from orange, red, and grey regions are requested to restrict their movements for 14 days. This general request to restrict movement for 14 days does not apply to passengers arriving from an “orange” region, who have received a negative/’not detected’ result from a COVID-19 Polymerase Chain Reaction (PCR) test taken during the three days before departure to Ireland. Passengers are requested to have supporting evidence of the negative test in their possession. It is the responsibility of individuals to determine whether their circumstances fall within one of the categories outlined in the EU Council Recommendation.

As these restrictions apply to both ends of the journey, it’s unlikely that we’ll see a significant increase in passenger numbers at Irish airports in the near future. PCR tests are now available from private companies at Dublin, Cork & Shannon Airports and have not reduced the resources of HSE testing. This additional testing may help to identify asymptomatic cases and reduce the possibility of super spreader events.