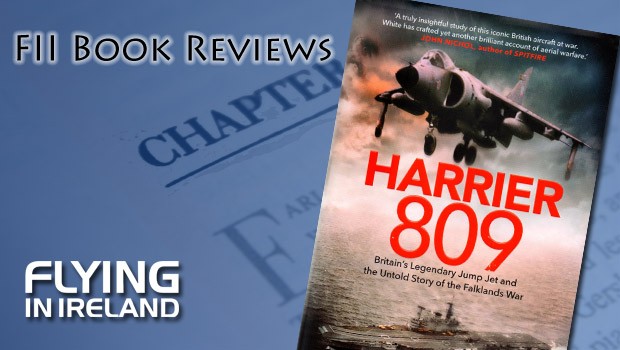 Over the last 38 years I have read many books about the Falkland Islands Conflict (and indeed written one which had a chapter about it). My interest has been sharpened by the fact that, being in the MOD at the time, I was involved in some of the seemingly peripheral but yet vital administrative actions, necessary to allow the Task Force to comply with UK and international law. I have also always been a great fan of the Harrier, so all in all, I could not really resist this book from an author with an excellent previous track record.

He is a storyteller, with a keen sense of the power of a well-crafted narrative, including the background details and a telling anecdote, but, crucially, also does his homework, as an examination of the bibliography will show. As a real-life tale in the style of Dick Clancy (or for older readers, Alistair MacLlean) it could not be bettered. The author’s writing style moves swiftly from one scene of action to another, conveying the story in bite-sized chunks but by this means reflecting the multi-faceted nature of the war: in the air, at sea, on land; planning, logistics, improvisation, diplomacy, surveillance, espionage and more.

The core of the book concerns 809 NAS, which was revived at very short notice to go to war but covers much, much more, including: Argentine air and naval operations, the SAS, covert RAF plans for Hercules and PR9s, US military support, , the Atlantic Conveyor and Chilean involvement to pick out just a few.  The close co-operation with Chile was extensive and far greater than we knew at the time. Another personal note is that, after the war, I had discussions with the Chilean Embassy in respect of a naval prize being set up for annual award to an officer under training at Dartmouth.

The author also touches on the corners that were cut and the rules that were broken in order to procure absolutely vital kit and also to modify existing equipment. Normal policy meant that obtaining the best possible, ‘gold-plated’ was the enemy of the good enough and resulted in spiralling costs and projects habitually overrunning by months or even years. In 1982 the book of rules was tossed out of the window, ‘does it work and will it be ready tomorrow?’ became the new standard – see page 57 for how to carry out a mod in double-quick time. One of my later jobs concerned mods committees, which were painstaking but really tedious. However, the other side of this had unfortunate consequences with respect to a lashed up mod on another type, with disastrous results a number of years later.

I certainly learned much that was new to me: the use of Easter Island as a base, RAF Hercules in Chilean markings, special training with the French Air Force, Nimrod R1 missions, SIS stings with arms dealers. It is also a very human story, describing the experiences, skills and fears of participants.

This is a fascinating book, which I thoroughly enjoyed reading and have no trouble in recommending as an excellent item for anyone’s stocking.