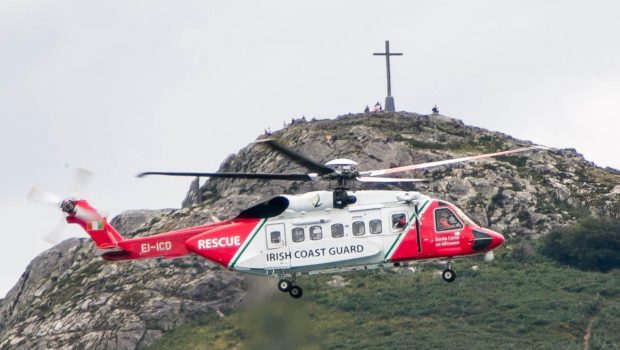 This weekend 140,000 spectators should have lined the seafront at Bray for the 2020 air show. To mark the event, Rescue 116 completed a short display yesterday as a tribute by the Irish Coast Guard and Bray Air Display organisers to frontline healthcare workers in recognition of their dedication and sacrifice during the pandemic. There to watch the display were many frontline workers as well as HSE CEO Paul Reid.

Rob Tatten, General Operations, CHC Helicopter said: “CHC who operates the Helicopter Search and Rescue contract on behalf of the Irish Coast has been taking part in the Bray Air Display every year. However due to the pandemic that wasn’t possible this year. But with the organisers of the show we said could we do something to recognise the phenomenal work of our fellow front line health care workers, who like us continue to work 24/7 365 days a year. So today Rescue 116 while out training will do a fly past to thank those workers while we also make a short presentation to Paul Reid and other front line workers to say thank you on behalf of CHC, the Irish Coast Guard, the Aviation Community and Bray Air Display.”

A Special Thank You for Frontline WorkersPosted by Virgin Media News on Saturday, 25 July 2020