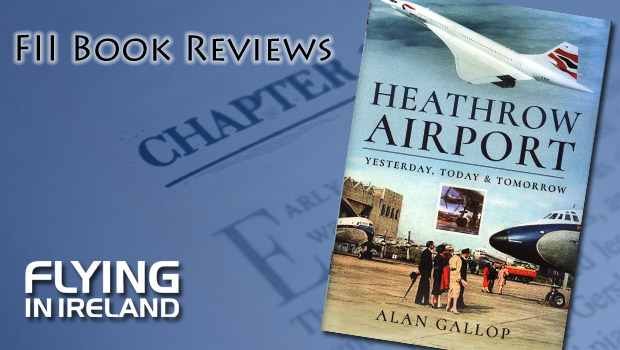 In days long gone by, I used to enjoy my visits, which were fairly frequent, to the old Terminal 1 at Heathrow, allowing plenty of time at the Belfast Lounge by Gates 10-12, sitting in a comfy seat with a coffee and a Danish Pastry, looking towards runway 09L/27R through the large picture windows and reaching for my camera as something interesting taxied close by. I therefore approached this book with a degree of nostalgia and keen anticipation.

The opening chapters give a historical survey of the site from 3000 BC (!) and consider the later impact of stagecoaches, highwaymen and market gardeners before moving on to 20th century proposals for the most suitable site for an airport to serve London. We then have a description of the political manoeuvring during the Second World War which resulted in the area being selected for development as a civil aerodrome. As befits a good journalist, who worked at the airport for 12 years, 1966-1978, and laments the passing of more glamorous times, the author has squirreled away many titbits of interesting information which he produces for the entertainment of the reader. He is not, however, an aviation historian and is a little bit hazy on some facts and details. This is the work of an enthusiastic amateur rather than an aviation expert. A bit more proof reading and copy editing would have produced a more accurate text. To take a few examples: the aircraft depicted on page 2 has nothing whatsoever to do with civil aviation, it is a BAT FK24, which was a one-off elementary training machine, the photo on page 32 is not a Swordfish but is a Fairey Seal, the B-29 was not the Flying Fortress, the Skymaster was a C-54 not a DC-3. I stand to be corrected but did the Soviets really use a Lisunov Li-2 for services from Moscow to London?

When underway, the construction of Heathrow in the 1940s was the largest civil engineering project ever undertaken in Britain to date. This is covered in some depth, with good use of photographs and maps, as indeed also are the pioneering flights by BSAA. The book contains many relevant and enjoyable personal reminiscences from those who were there, including my good friend, Keith Hayward, who is the doyen of historians as regards BSAA, BOAC and BEA.

By halfway through the text, we have only reached 1953 and a huge amount of space is devoted to the DH Comet saga, which, strictly speaking, has precious little to do with Heathrow.

Going back to quirky facts, readers will learn on page 167 why Terminal 3 was too hot in summer and too cold in winter. Another odd (to me) stylistic quirk is that many of the lengthy captions are word for word the same as the text in the main body printed alongside.

The second half of the book goes at quite a lick through the advent of the 747 and Concorde, the BOAC/BEA merger, the Winter of Discontent, the Staines Trident crash of 1972, security and union issues (the latter seeming a bit one-sided to me), the Brinks Mat robbery, Lockerbie, T4, T5, privatisation, BA versus Virgin and the ‘dirty tricks’ affair, IRA attacks and the third runway debate.

The photographs are terrific, with the central colour section being outstanding. This is not a classic book but is good in parts. I would suggest that this is a good one to order from the library first, have a read and see if you want to buy it for your collection.