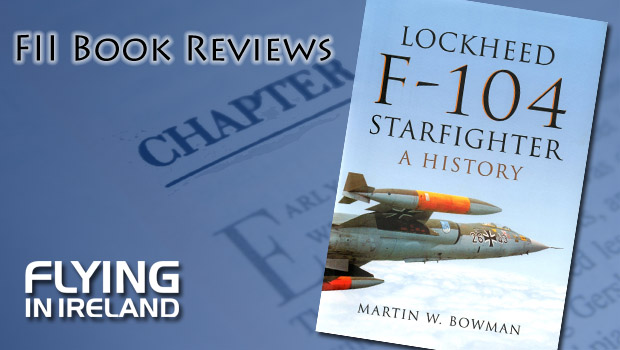 On first leafing through this hefty volume, I was immediately struck by the marvellous range of illustrations – photos, paintings and posters – very well reproduced on excellent quality paper – many with very detailed captions. More years ago than I care to remember, I was a regular visitor at airshows all over the UK. One of my favourite acts was the Canadian Lockheed F-104 team (see the photo on page 222 – I was there, I also photographed the tiger-striped model at the IAT). Their party piece was to arrive at low level from behind the crowd line, making several thousand people jump in unison with the unearthly howl of their engines – ‘the wail of a wounded banshee’. No less than 2577 of these charismatic aircraft were constructed but their undoubted appeal has been overshadowed by an unfortunate association with crashes and a corporate bribery scandal. The author, to his credit, does not shrink from these issues.

The F-104 was designed as a high-speed, point defence interceptor, specifically targeted at Soviet bombers. It had very short, stubby, thin wings with a very high wing loading and as a result was not very manoeuvrable. The aim was to attain Mach 2 in the shortest possible time and in this it certainly succeeded.

The author gives a detailed technical description of the airframe and engine, comprehensible to the layman and notes that in the early models, the ejection seat was downward firing, which wasn’t a great deal of use at low level. The first flight came in 1954 and, after a difficult period of test flying, entered service in 1958. The text is illuminated here by fascinating verbatim reports from the test pilots. More follow in the next chapter with a fund of pilots’ stories of those who flew the ‘Zipper’, ‘Widowmaker’ or ‘missile with a man in it.’ As its roles expanded be armed with nuclear weapons, conventional bombs, a Gatling gun or Sidewinder missiles, also setting a height record of 103,381 feet and a World Airspeed record of 1404.19 mph in the late 1950s. it could also fly tactically as a fighter bomber at 50 feet and 700 mph. Combat in Vietnam by the USAF is described in some detail and is absorbing to read.

The shocking fatal crash record of the German Air Force, which included an entire four-ship display team in 1962, is ascribed to ‘green pilots, poor maintenance and lousy European weather’. The WW2 Luftwaffe ace, Erich Hartmann, had a low opinion of the Starfighter, ‘a terrible dogfighter and dangerous to fly’. Others loved it as the most exciting and exhilarating machine ever – ‘a greyhound built to nip the butt of pit bulls.’

The experiences of all the different nations to use the F-104 is recorded faithfully – Belgium, Canada, Denmark, Greece, Italy (42 years!), the Netherlands, Norway, Turkey, Pakistan, Taiwan, Spain and Japan.

A Canadian pilot stated, ‘By and large F-104s did not kill pilots. Pilots killed pilots. The F-104 was not devious but demanded respect – punishment for a major transgression was often swift and fatal; though the lack of manoeuvrability at low level could be very dangerous.’ It is also interesting to note that none of the 45 Belgian NCOs who flew the F-104 were killed – all had a least 2500 flying hours previously. It would seem that the key attributes to a successful career were, ‘be a very good, experienced pilot, fly in clear skies, maintain it well and don’t fly too near to the ground.’ This is borne out by Spanish use suffering (uniquely in Europe) no crashes through using the aircraft exclusively as an interceptor in mainly good flying weather.

If you are a Starfighter fan or want to gain an understanding of the joys and perils of flying a high-performance but tricky fighter in the Cold War years, then this is the book for you. I thoroughly enjoyed it, learned a lot and cannot imagine that it will be easily surpassed as the go-to read on this iconic type.