2019 has proven to be the busiest year on record at Ireland West Airport with passenger numbers climbing by almost 5% to 807,000 for the first time in the airports history, surpassing the previous record of 772,000 passengers achieved in 2018. The passenger figures represent the fourth consecutive year of record passenger growth at the airport. The airport now serves 20 International destinations and is served by four of Europe’s major International airlines, Aer Lingus, Flybe, Lauda and Ryanair.

The number of passengers traveling on services to Mainland and Continental Europe hit a new high for the airport, increasing by 20% with the addition of a new service to Cologne by Ryanair and additional capacity on Ryanair’s Barcelona service helping boost the numbers travelling in 2019.

Despite the ongoing uncertainty over the Brexit situation, the growth in passenger numbers in 2019 was further fuelled by a very strong performance across the range of UK services available at the airport, with numbers travelling to and from the UK increasing by 2% in 2019. In addition Ryanair recorded its busiest ever year for passenger numbers at Ireland West Airport carrying a total of 622,000 passengers last year.

2019 saw continued investment in the Airport Transformation Programme with a number of infrastructural projects completed during the course of 2019 aimed at transforming the facility and modernising the airport to ensure the facility will meet the future needs of both airline customers and passengers. 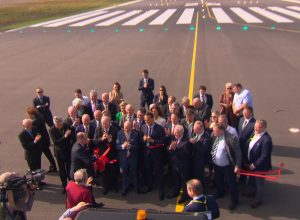 Opening of the resurfaced runway in 2019

The rehabilitation of the airports 2,400 metre runway between May and September was the single largest capital investment project undertaken by the airport since its initial construction and included a complete resurfacing of the existing runway and taxiway surfaces, the removal and reinstatement of runway edge, centre line, and touch down zone lighting, ducting and other associated works. The completion of this project in September will ensure that the runway at Ireland West Airport continues to meet the strict regulations governing the operation and specification of runways at major airports. Runway 26/08 was opened in 1985 and this is the first time in its 34-year history that the runway has had a full overlay.

2020 has got off to a good start as the airport is set to welcome Austrian based airline, Lauda, a 100%-owned subsidiary of Ryanair Holdings plc will launch a new service to Palma Majorca from the airport starting on 31st March 2020. The new Majorca service will operate twice weekly on Tuesdays and Fridays throughout the summer period using an Airbus A320 aircraft. Lauda is a low-cost carrier based in Vienna in Austria and currently flies to 38 destinations across Europe.

Commenting on the 2019 performance, Arthur French, Chairman, Ireland West Airport said: “The continued growth at Ireland West Airport is fantastic news for the regional economy. We are delighted to have had a record year with passenger numbers reaching 807,000 for the first time in the airports history which is also good news for tourism, and job creation, both at the airport and in the wider economy. This is the fourth successive year of growth at the airport and a decade which has seen the airport increase passenger numbers by 37%, from 589k passengers in 2010 to a record high of 807k passengers, in 2019. I would like to thank our customers, airline and tour operator partners, stakeholders, tourism groups, local authorities and Government representatives for their ongoing support in helping us to continue to grow passenger numbers and develop international connectivity for the region. I would also like to say a special word of thanks to the staff at the airport for their hard work and continued focus on ensuring the customer and passenger experience through the airport is both a safe and welcoming one. As we look ahead to 2020 the year ahead will present many challenges due to ongoing uncertainty in the aviation industry and in particular due to Brexit and the continued grounding of the 737 MAX aircraft. We will continue to work with our stakeholders and airline partners over the next 18 months as we strive to develop new and existing access and continue our airport transformation programme’.

Emer Gilvarry joins the board of Ireland West Airport 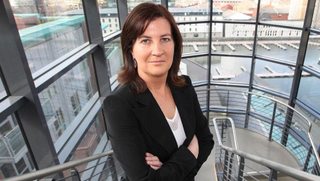 Ireland West Airport has announced that Ms. Emer Gilvarry has joined the board of the airport. Ms. Gilvarry is a former Chairperson of Mason Hayes & Curran and a Partner in the Dispute Resolution team. She is experienced in a broad range of commercial and financial services litigation and is also a member of the Advisory Board at UCD Michael Smurfit Graduate Business School, a Council member of the Economic and Social Research Institute and a Board member of Greencoat Renewables plc and the Ireland Funds. Ms. Gilvarry is also a qualified mediator.

As a former Board member of Aer Lingus, having sat on the Board for two years in the lead up to the acquisition of Aer Lingus by IAG, Ms. Gilvarry brings a wealth of aviation experience to the role.

Commenting on the appointment, Arthur French, Chairman, Ireland West Airport, said ‘I’m delighted to welcome Emer to the board of the airport. She brings with her a wealth of experience and business expertise having served as a member of many Boards, contributing to all aspects of business, but in particular, acting as a trusted legal advisor and a guardian of good governance.  Importantly, she brings aviation industry expertise, through her previous board role with Aer Lingus and I have no doubt she will be a great asset to the board at an exciting time, as we look to continue to deliver on the airport’s role as a key economic driver for the West and North West of Ireland’