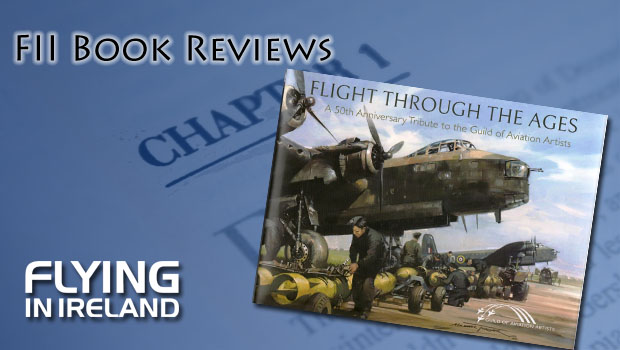 Book Review – Flight Through the Ages

A 50th Anniversary Tribute to the Guild of Aviation Artists.

One of the great pleasures of visiting a Service mess is spending some time walking through the ante rooms, corridors and dining room, examining the many works of original art displayed on the walls. A considerable number  of these fine paintings would have been the work of members of the Guild of Aviation Artists.

This book is both a compendium and celebration of more than 200 diverse and accomplished works on the theme of more than 100 years of aviation. These are reproduced in colour on fine quality paper in large landscape format. With a terrific image of Short Stirlings by Guild President, Michael Turner, on the cover, the book could not really have made a better first impression!

We begin with a brief history of the Guild followed immediately by a charming study of Wilbur Wright flying gently over the spectators, gaily attired in bonnets and straw boaters, at Le Mans in 1908.

There then follows a magnificent series of images in a variety of styles and in broadly chronological order but arranged in sections, Early Aviation, Military, Air Shows, Civil, Rotary-winged, Gliding, Museums and Portraits.

Appropriate adjectives to describe these would include: striking, evocative, colourful, thought-provoking, highly detailed, moving and impressionistic. I will pick half a dozen particular favourites: an SSZ airship on patrol in the English Channel, a marvellous study of a FE2d dogfighting, with the observer perched precariously, a delightful image of the morning rush hour at Croydon in the 1930s, a superlatively detailed image of Beaufighter production by the incomparable Terence Cuneo, a QRA scramble by a Victor, which all but rises off the page and Britannias at Filton by David Shepherd.

I could have selected 50 or 100. This is a lovely book in which to browse, feast your eyes and ponder on the magic of aviation. I have but two minor quibbles, an index by subject and artist would have been nice and also a note of the date when each painting was completed.