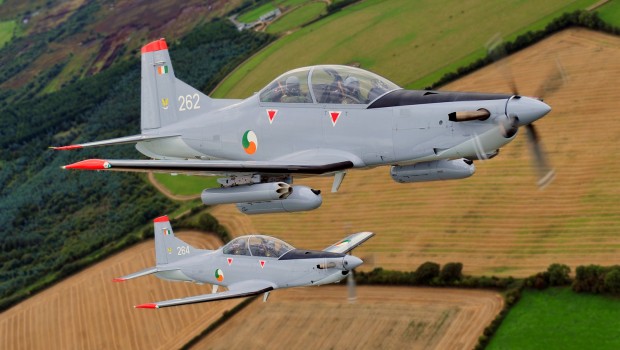 The 12th October marked the 10th anniversary of the tragic accident of Irish Air Corps (IAC) Pilatus PC-9 ‘265’ which resulted in the deaths of Captain Derek Furniss and Cadet David Jevens. In a ceremony last week family, friends, and colleagues gathered to remember the crew of ‘Fox 265’ in Cornamona. This short video has been released by the Air Corps to commemorate the event.

Below is a copy of the article, written by Jim Lee, that was published in the March 2012 Issue of Flying In Ireland Magazine, just after the final report into the accident was published.

Just after our last issue went to press, the Air Accident Investigation Unit (AAIU) of the Department of Transport, Tourism and Sport published its final report into the fatal Irish Air Corps (IAC) Pilatus PC-9 accident involving ‘265’ on 12th October 2009 resulting in the deaths of Captain Derek Furniss and Cadet David Jevens. The report was published on 24th January and Minister Varadkar is to be commended for his prompt review and early publication of the report given that the legal representative of one of the families had sought a review of this Report under regulations. Given that this is a sensitive matter which concerns two bereaved families, it is important that all coverage of the report be produced in a factual and dispassionate way and concentrate on lessons to be leant rather than seeking to apportion blame. The Investigation determined that the probable cause of the accident was Controlled Flight Into Terrain (CFIT) attributable to Spatial Disorientation due to a Somatogravic Illusion following the loss of Situational Awareness.

A military inquiry will be held into the crash and its role will be different from the AAIU process. The family of David Jevens were relieved that the report has been published saying that it has cleared their sons name. David’s father Donal Jevens, said the time since the crash had been “extremely hard” for David’s parents, brother, sister and girlfriend.

PC-9 ‘265’ departed its base at Baldonnel, on a Visual Flight Rules (VFR) cross-country, navigation-training exercise with Galway Airport as the intended destination. 265, was the first of three PC-9s, which departed at 15-minute intervals on the same navigational training exercise. David Jevens was the handling pilot and the aircraft flew initially northwest and later southwest towards Maum, Co. Galway. He was one of a class of cadets coming to the end of their Pilot Wings course and had flown 193 hours on the PC-9. The aircraft was five years old and had accumulated 1,041 hours.

As it approached high ground on the western shores of Lough Mask, the weather ahead was deteriorating. The aircraft, keeping in visual contact with the ground, crossed a ridge into a narrow and steep-sided valley. It then commenced a rapid series of steep turns and turned onto a northerly heading while pitching up and climbing into cloud. The aircraft then entered a progressively increasing pitch down attitude while rolling to the right before impacting the northern slopes of the valley in a steep nose down, wings level attitude at high speed. A local resident of Crumlin Valley called the Emergency Services at 17.02 and enquiries at Shannon Low Level Air Traffic Control (ATC), who had been in communication with the three aircraft, established that PC-9s, ‘261’ and ‘266’ were still in communication while ‘265’ was not responding. ATC then requested ‘261’ to search for a missing aircraft but this search was unsuccessful and was abandoned due to rapidly deteriorating weather.

The Marine Rescue Coordination Centre (MRCC) launched an Irish Coastguard Search and Rescue (SAR) helicopter, which took-off from Shannon Airport at 17.35. It subsequently arrived in the search area at 18.29, but reported “difficult foggy weather in the area” and consequently discontinued the search. Two local residents, who had seen the aircraft, climbed to and located the accident site. They found the crew fatally injured, advised An Garda Síochána by mobile phone and later directed the Emergency Services to the accident site. Although visibility and communications were poor, Gardaí arrived at 19.14 and secured the site pending arrival of the investigation teams. Castlebar Fire Station, Co. Mayo had initially notified the Air Accident Investigation Unit (AAIU) at 17.10 of a possible aircraft accident. After confirmation, AAIU and Irish Air Corps (IAC) investigation teams were deployed and commenced the investigation at first light the following morning.

David was considered as one of the better students in the class. He had, according to the cadet in ‘261’, prepared the pre-flight documentation and it is likely that the pre-flight briefing was according to IAC SPTM procedures, since the CVR records accurate and regular checks during the flight with good forward planning and anticipation. Accordingly, the flight progressed as planned until he said he would have to bypass Maum. He was instructed by Captain Furniss to continue and to look at their options later, which he proceeded to do. At that point, tactical decision-making passed from the Cadet to the Instructor. Thus the Cadet had little further input into decisions and according to the report “was evidently unsure as to what further decisions on the direction of the flight he was expected to make. As a result his workload and stress level would have increased significantly at that time”. Twice the Instructor took over control; initially without advising the Cadet (to turn away from Finny Valley), and finally, in Crumlin Valley, formally taking control. From that latter point onwards, there is no evidence that the Cadet had any further input into the operation of the aircraft.

David’s father, Donal believes his son made conscious decisions to avoid the area where the accident occurred because of the weather conditions. “In that five minutes [before the crash] he made other decisions and other suggestions, in terms of getting them out of the area, and none of them were entertained by the instructor”. He believes that the accident was avoidable and he noted that the two other aircraft had taken steps to avoid the area, because of the weather. “If David had been on board one of the other aircraft, he would still be here today with us. His death was unnecessary. It was avoidable and unnecessary.”

Captain Derek Furniss was a skilled aircraft handler, the Chief Weapons Instructor, the approved singleton aerobatic display pilot and his personnel records showed that he was highly rated. Although he had spent longer than average in FTS as an instructor, this appears to be as much due to organisational requirements as personal volition, considering the regular turnover of FTS Commandants. He joined the IAC as a cadet in 1994 and later qualified as a flying instructor in 1999. With 865 hours on type, he was considered to be one of the most experienced IAC PC-9 pilots. He had 2,523 hours on all types of which 2,212 were as pilot in command. This however may have generated a level of self-belief that there were few conditions that he could not recover the aircraft from. Consequently, after the decision was made to continue visually into forecast poorer weather under the MSA, that decision was not revisited or re-evaluated in light of the developing and deteriorating situation.

The report notes that he had been previously grounded for a low level pass along the runway at Baldonnel, but adds that “he would not have conducted this at his base in full view of senior officers had he not understood that he had been granted permission”. The Investigation was satisfied that this grounding appears to have been due to a lapse in communication within the Air Corps.

The report accepts that the Instructor assumed control (at Finny Valley) without announcing it first and that the aircraft later crossed over the ridge into Crumlin Valley below minimum height contrary to Standard Operating Procedures. There was a loss of situational awareness due to unexpectedly seeing a mountain ahead and having to make an evasive manoeuvre. He apparently recognised his error saying “Bad decision now” and the vigorous handling of the aircraft during the final turn prior to the attempted low level abort made the onset of spatial disorientation more likely and increased stress and anxiety. The report concludes that the Instructor probably succumbed to a somatogravic illusion and pushed the nose down. The report makes seven recommendations all aimed at improving Air Corps procedures.

Extending his “deepest sympathy” to the families of the two pilots and their loved ones, the Chief of Staff of the Defence Forces Lt-General Sean McCann said in a statement he had ensured that “all recommendations in the report have been implemented or are being implemented”. “While I must ensure that members of the Defence Forces are trained to the highest possible standards in order to serve the Irish people, I am also acutely aware that we must continue to apply the highest international standards of risk management to ensure the safety and wellbeing of all our personnel,” he added.