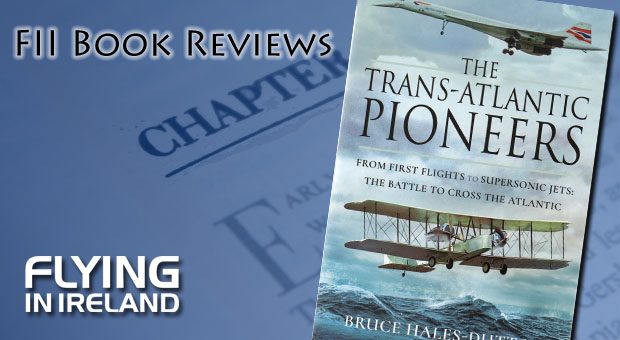 As will be seen by devotees of Flight Radar 24, in 2019 up to 3000 aircraft the North Atlantic each day in both directions between airports in Europe and North America. As will be seen from the Trans-Atlantic Chronology 1859-2019 at the start of the book, Ireland has been the scene of many memorable parts of the story, including, Alcock and Brown, the Bremen, Amelia Earhart, ‘Wrong Way’ Corrigan, Jim Mollison, Foynes, wartime ferry flights, Shannon Airport, the record-breaking Canberra and Richard Branson (who is not mentioned).

The earliest attempts were made by balloon and dirigible but it was not until the injection of a cash prize by Lord Northcliffe and the technological advances spurred on by war, that success was achieved. I was pleased to read that the achievements of the US Navy and the R.34 were given due prominence as well, of course, as Alcock and Brown in their Vickers Vimy. The author tells the tales well and crisply but with a satisfying amount of detail. The boxes of supplementary information with each chapter are a good and helpful idea. I would like to have seen a few route maps which would have helped to explain the chosen flight paths with greater clarity.

Some information I did not previously realise included the fact that Douglas Corrigan worked on the Spirit of St Louis, that Baron von Hunefeld was blind in one eye and partially sighted in the other, the Hindenburg was three times larger than an A.380 and that the airship’s smoking lounge could only be accessed through on airlock.

It was made apparent to me that just as WW1 made the short sea crossings from Great Britain to France and Ireland by air a matter almost of routine, so did WW2 have the same effect on crossing the North Atlantic, with nearly 9500 aircraft being flown across to the ETO from the USA and Canada, laying the foundations for the huge development of civil aviation, though it would not be until the end of the 1950s that more passengers would cross the North Atlantic by air each year rather than by ocean liner.

The post-war battle for supremacy firstly between Lockheed, Douglas and Boeing piston-powered airliners and then briefly challenged by the DH Comet and Bristol Britannia is well covered, as are the advent of the Boeing 707, Douglas DC-8, the widebody revolution of the 1970s, deregulation and Skytrain, Concorde, ETOPS and the flight of the replica Vimy in 2005. There are now more than 400 non-stop commercial routes across the North Atlantic.

This is a mighty story of technical, economic, political and diplomatic challenges being overcome, of bravery and of visionaries. I thoroughly enjoyed reading it but if I could make another suggestion for future editions it would be to double or treble the number of illustrations.

Tags: Book Review, From First Flights to Supersonic Jets, The Battle To Cross the Atlantic, The Trans-Atlantic Pioneers