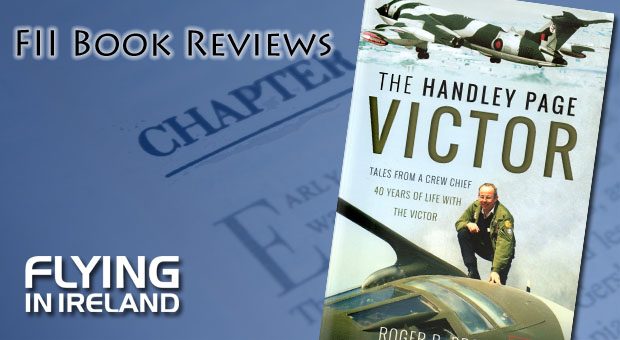 I was particularly interested in reading this book as, many years ago, I had the great thrill and privilege of flying on a tanking sortie in Victor K2, XL511, of No 55 Squadron, from RAF Marham, the full story of which appeared as part of a serial story in the Ulster Airmail as long ago as 1996.

Roger Brooks is already the author of a two-volume history of the Handley Page Victor, published by Pen & Sword a decade ago. He now tells his own part in the story, beginning in 1966 as a Corporal engine fitter at Marham. He explains the daily round in quite some detail. Normally aviation autobiographies are written by aircrew, so it is refreshing to share the perspective and developing expertise of a young technician on the ground. If you want to know the precise function of a 2BA open-ended spanner, how to carry out engine ground running, what a giraffe is for and much, much more, then this is the book for you.

By 1967 there were more than 30 Victors based at Marham and Sergeant Brooks had progressed to the Station Handling Flight, looking after visiting aircraft of all shapes and sizes from Chipmunk to VC-10. For VIPs he had to wear white overalls (or a white dustcoat, when in a supervisory role), taking on such tasks as repainting the VIP wheel chocks, in white of course. He left Marham in 1968 but returned in 1971, to No 214 Squadron and in charge of a team of engine fitters. As it was located on the far side of the airfield there was much less ‘bull’. Other joys came from a detachment to Cyprus, flying out by Britannia and back by Belfast. In this connection, the aerial photograph on page 30 is superb.

In 1972 he began his Crew Chief’s course at St Athan, Halton and Marham, which took nearly a year and qualified him to ride in a Victor when detachments were made to Goose Bay, Masirah, Sharjah and Laarbruch, to name but a few. He progressed in 1975 to No 55 Squadron and the superior Victor K.2, the swivelling sixth seat on board which was ‘the best seat in the house’, with which I heartily agree. Further promotion and responsibility came in 1976, having been appointed Crew Chief Leader with No 57 Squadron. He once again gives a detailed and interesting account of his duties, including accompanying a delivery flight of Harriers on their way to Belize in 1977 and also at RAF Finningley Battle of Britain At Home Day. He concluded his 23 year’s service in 1980 as SNCO of the Victor Servicing Flight.

Thereafter he helped to look after XH648 at Duxford and XL231 at Elvington. I found this to be an interesting and enjoyable read. It is maybe more suited to those with a particular interest in aircraft engineering and maintenance as opposed to the general reader.