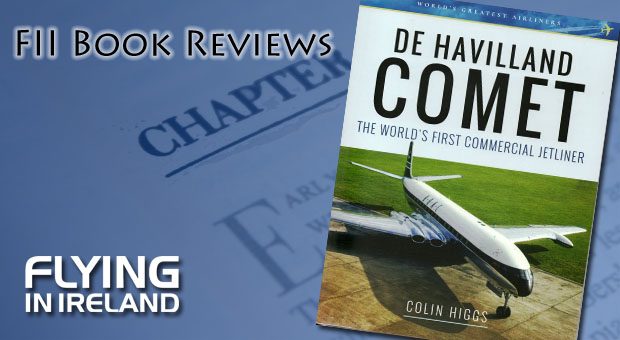 Air World Books is an imprint of Pen & Sword and is therefore a sign of a quality production. This is a very timely publication, considering the fact that on 27th July 1949 the era of commercial jet aviation began when John Cunningham took the prototype Comet, G-5-1, for its first flight at Hatfield.

The book begins with a brief review of the work of the Brabazon Committee and its influence on the post-war development of civil aviation in Britain and also pays tribute to Frank Halford’s pioneering work on the development of the jet engine. It is interesting to note the original specification for the Comet made provision for a load of only 24 trans-Atlantic passengers or as a high-speed, high-flying mail carrier. Other points which the author covers include the testing of a pair of the DH Ghost engines on an Avro Lancastrian and of the nose assembly on a Horsa glider. All of this and much more is illustrated in a stunning array of photographs from the BAE Systems Archive.

The Comet’s first commercial flight was on 2nd May 1952, to immense popular acclaim. Anything seemed possible for British technology. And then it all came crashing down with the series of crashes in 1952-54, which effectively grounded the aircraft for several years and thereby lost its commercial advantage over emerging US competitors. Belfast lost out too, as in 1952 a second production line had been opened up at Shorts. Over 1600 personnel were engaged in work related to this contract and two complete fuselages had been shipped to Chester when it was suspended, never to be renewed, in 1954.

Eventually the redesigned Comet IV was a success, though never selling in the numbers originally anticipated, and the Comet 2 served with great distinction with the RAF (the C2 to 1967 and the C4 to 1975). A Comet, XS235, with 84 years old John Cunningham on board, took to the air for the last time in 1997.

The author tells this story simply and effectively in a straightforward chronological narrative. A final chapter, The Comet Experience, is based on the recollections of two RAF pilots and an Appendix gives the full production list.

I enjoyed this book and would highly recommend it.