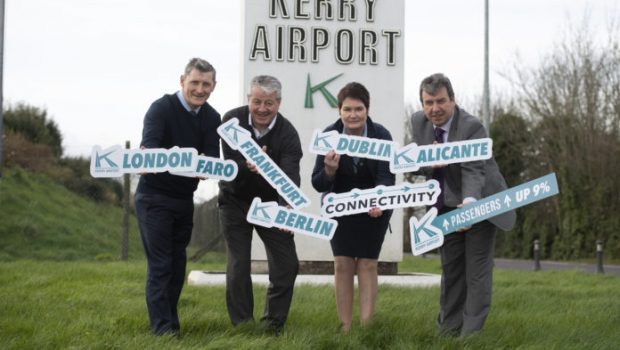 Passenger numbers at Kerry Airport soared to 365,000 passengers in 2018, an increase of 30,000 or 9% over 2017 figures. The Kerry – Dublin PSO route currently operated by Aer Lingus Regional saw an increase of 12% while load factor on the Ryanair’s Berlin route was 85% (32,000 passengers). The increase in passengers on the Dublin route was driven by a change of aircraft from the ATR42 to ATR72 on the route. The 9% increase made Kerry Airport the fastest growing airport in Ireland in percentage terms in 2018. In the same period, Dublin Airport achieved 6% while Shannon achieved 6.5% growth.

The Chairman of Kerry Airport, Denis Cregan, said “The positive growth in passenger numbers through Kerry Airport is both welcome and encouraging as it helps to put us on a stable footing with the cloud of Brexit hovering overhead. The short 50 minutes travel time from Kerry to Dublin is a major saving in time for busy Kerry businesses needing access to Dublin and onward to destinations in the USA, Europe, the Middle East and Australia. Seamless interlining of the Aer Lingus flights from USA to Kerry via Dublin is seeing increased American tourists coming direct to the Kingdom.

“Ryanair’s decision to extend the Berlin route through the summer of 2018 underlines the importance of Kerry as a destination and gateway for the German tourist market and will ensure increased visitor numbers to the region.

“Our strong case to Ryanair to continue the Faro series in its Summer schedule in 2018 resulted in a 34% increase in traffic. Work on additional new routes are on-going with Kerry Airport’s airline partners, Tourism Ireland and the tourism organisations in Kerry.”